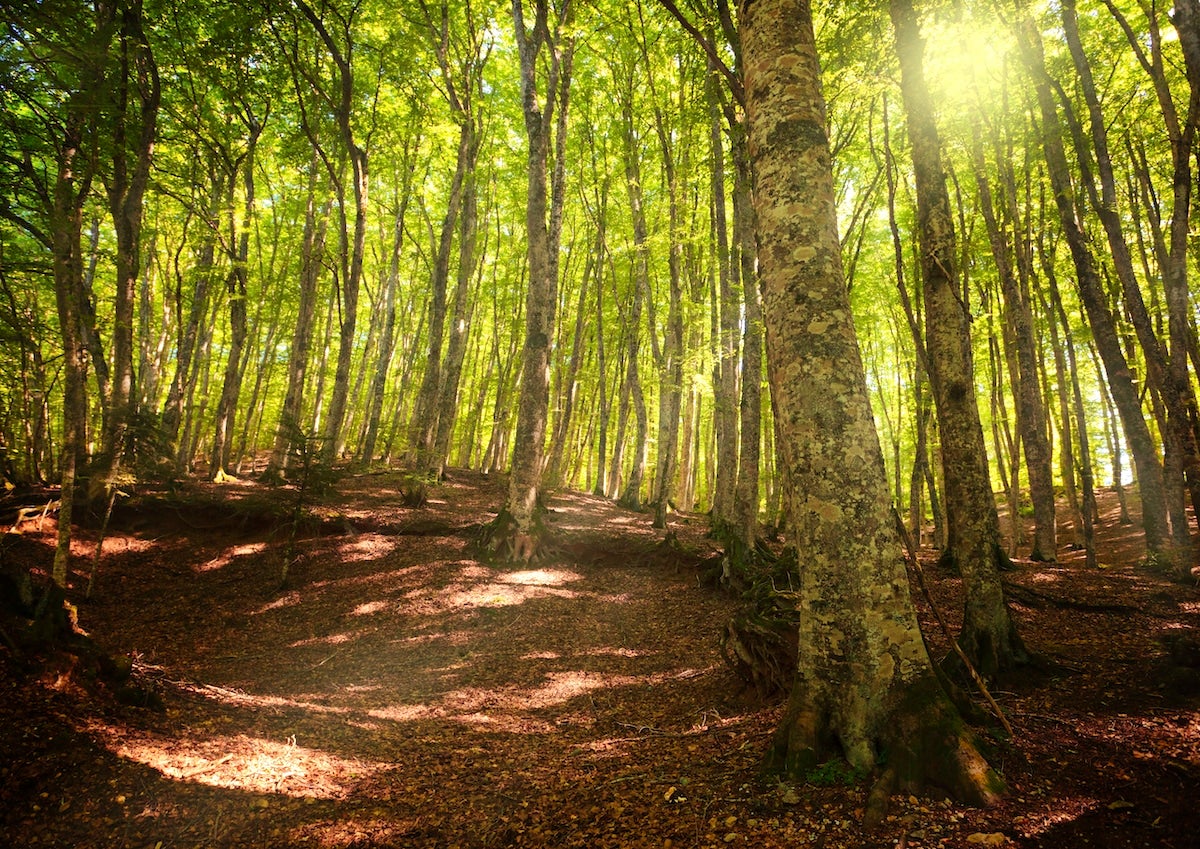 Nestled at the very edge of the toe of mainland Italy you’ll find Aspromonte National Park, one of the wildest places in Italy. It sits at the end of the Apennines, which start just below the western Alps and run through central Italy to the toe of the country’s “boot.”

The name Aspromonte means “white mountain.” The area is known for its rugged granite mountains that reach 6,500 feet and the forests that cover 60% of the park’s lowlands and some peaks.

Aspromonte was designated a national park in 1989, but the history of this natural area runs deep. Archaeological evidence from Greek and Roman civilizations has been found in the park and local villages, including early prehistoric agricultural and pastoral tools and musical instruments.

Today the villages that border the park also preserve its unique heritage. The local dialect of Italian has been influenced by Greek settlements, as have local crafts such as byzantine fabrics and crochet work.

While Aspromonte is known for its rugged beauty, it is its placement within the UNESCO World Heritage Ancient and Primeval Beech Forests that makes it unique.

These forests are the southernmost component of the UNESCO world heritage serial site that helps protect ancient beech forests across 18 countries.

The European beech (Fagus sylvatica), found throughout the continent from Germany to Ukraine to Italy, has survived tumultuous temperature fluctuations over a million years. The remaining old-growth trees — including in Aspromonte — are a testament to its resilience. But that’s being put to the test with climate change.

At the heart of the park’s forests is Valle Infernale — the infernal valley — where Aspromonte’s old-growth European beech trees are found. The forest transitioned from evergreens to the old-growth mixed stands that are seen today. The ages of the beech trees reach more than 200 years.

Since they’re high on a steep, ragged ridge, their inaccessibility has allowed these trees to escape extensive logging. Today what remains is an exemplary beech forest habitat, showing what an undisturbed forest can be: resistant, resilient and full of life. Italian wolves, peregrine falcons and goshawks make their homes here. The old-growth forests also help provide clean water and air, store vast amounts of carbon, and support the rich biodiversity. The benefits of old growth extend beyond the park and are necessary to help mitigate global climate change in the future.

Protecting old-growth forests ensures that carbon dioxide remains stored, instead of further emitted into the atmosphere. Furthermore, because the forests are rich, unique habitats, the protection of these ecosystems ensures that they remain stable habitats for the species that rely on them.

Valle Infernale’s forest may have escaped previous logging activity, but there are other current threats. Our work showed that a human-caused wildfire in 2021 didn’t touch the core area of the old-growth beech (thankfully), but it came as close as it could and burned other parts of the surrounding forest. Wildfires, which could be made worse by climate change, pose a future risk.

The health of neighboring trees — a mix of pine and other broadleaf species — is important to the health of the beech forest. Damage to these neighboring habitats, whether from fire, climate change or development, could result in irreversible fragmentation of the broader interior habitat. Italy is approximately one-third forested, and these pockets of old-growth are of the utmost importance, particularly in a changing climate. The species that make their homes here rely on the unique environmental conditions provided by the integrity of the old-growth structure.

While the beech tree is considered adaptable and robust, the future with climate change remains unknown.

Agriculture and logging have forced the conversion of forests worldwide, notably in Italy, a country known for its abundant food culture. Over time, that trend changed, and Italy gained forest cover from 1990 to 2010. But the threat is not over. According to Global Forest Watch, Italy lost forest cover in 2021. Development continues to threaten forests surrounding the park. Fragmentation even outside of the UNESCO World Heritage Sites leads to disrupted habitats for animals, erosion and other adverse effects.

My Place in This Place

Vermont writer John Elder’s book, Pilgrimage to Vallombrosa, follows George Perkins Marsh’s journey from Vermont to Italy, comparing the environmental conditions of the U.S. East Coast to those of Italy. As a New Englander, I see the strong connections between these two landscapes that may look vastly different. Both regions have been exposed to repeated human influence in the form of agriculture, logging, and human displacement and migration. Now both face the pressures of a changing climate. These forest areas are irreplaceable carbon sinks, biodiversity hotspots and unique habitats.

Working in these ecosystems changed how I think about cultural and natural resource management. As a Fulbright student researcher, I’ve spent only a brief time here — just nine months. Compared to the lifespan of these trees, that’s especially short. But joining the landscape and ecological planning lab in Viterbo, Italy, has allowed me to gain an even wider perspective on these forests and why they matter. In Italy, the cultural history is valued everywhere from museums and architecture to the forest. Forest management must involve diverse stakeholders — the foresters, townspeople, local farmers and artisans. The future of forest health relies on dialogue among these diverse groups.

Climate change will cause harsher temperatures and species’ livelihoods to be compromised. But storytelling and communicating the value of these places can, and must, continue.

What This Place Needs

Communicating the value of old-growth forests is one of the most important things that scientists and citizens alike can do. Academic research and reports warn of the severity of the climate crisis and biodiversity loss, but there is an essential need to better communicate these issues to the public.

Stories about these forests and villages can help connect people to these old-growth systems and their irreplaceable worth and inspire people to continue to work to protect them. The stories that need telling should come from all angles — from those who make their lives working in the park, those who visit, and those who protect them.

To learn more, stay up to date with papers and research from the landscape and ecological planning lab at the University of Tuscia and the UNESCO World Heritage Old Growth Forests Project. Other helpful sources can be found in the European Wilderness Society. Or better yet, visit an old-growth forest yourself and be surrounded by the ecosystem services that these forests provide.

Do you live in or near a threatened habitat or community, or have you worked to study or protect endangered wildlife? Share your stories in our ongoing features, Protect This Place and Species Spotlight.

The Revelator
The Revelator, a news and ideas initiative of the Center for Biological Diversity, provides editorially independent reporting, analysis and stories at the intersection of politics, conservation, art, culture, endangered species, climate change, economics and the future of wild species, wild places and the planet.