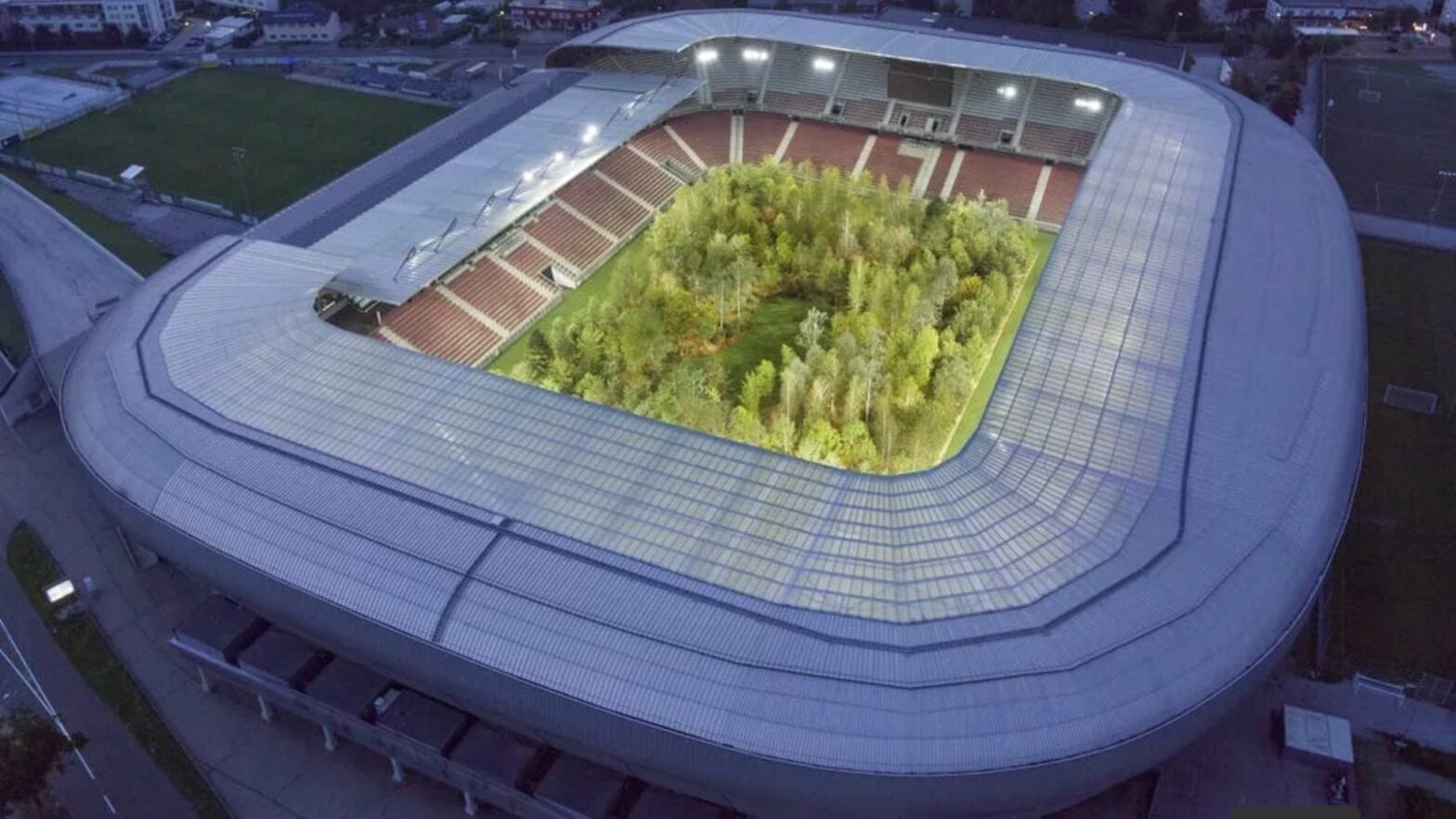 Austria’s Wörthersee Football Stadium has a new team on the playing field. Normally packed with up to 30,000 sports fans, the stadium has been transformed into a living forest in an attempt to bring attention to climate change and deforestation.

The art installation by Klaus Littmann titled FOR FOREST – The Unending Attraction of Nature, is a temporary exhibit meant to “stir up a range of emotions and reactions” showing the stark contrast of linear, man-made stadium arena juxtaposed against shrubbery and sky-reaching trees in a variety of green hues.

“The installation is a clever play on our emotions when faced with what should be a familiar sight, placed in an entirely different context,” wrote the project. “With this monumental work of art, Littmann challenges our perception of nature and sharpens our awareness of the future relation between nature and humankind.”

Nearly 300 trees between 8 and 14 meters tall, some weighing up to six tones each, were brought in from surrounding nurseries, reports CNN.

The entire field is covered by a mixed forest characteristic of Central Europe complete with 16 trees commonly found in the region, including maples, alders, birches, beeches, larches and pines. Much like the forests surrounding Europe’s urban centers, the stadium landscape is “shaped by weather as well as the autumnal turning of the leaves”.

“I have never worked with living beings before and I am absolutely aware that this cannot be compared to working with a sculpture, a photo or a painting,” Littman told the BBC. “The work has to be adapted to the species and has to be done with a lot of attention and respect.”

The concept is based on Max Peinter’s 1936 dystopian pencil drawing, “The Unending Attraction of Nature” which famously showed crowds packed into a stadium admiring a forest of trees. Meant to imagine a time when forests might only exist as exhibition objects, the painting was displayed in over 20 German-language books, according to The Guardian.

“I thought that the idea behind the work was simply fascinating,” Littman said, adding that he had wanted to buy the drawing but it had already been sold to a collection. “That’s when I decided I wanted to realize the drawing, have it in front of me and experience it in real life.”

The project comes with it a warning to its viewers: “One day, we might have to admire the remnants of nature in specially assigned spaces, as is already the case with zoo animals.” In a world of increasing deforestation, the thought experiment highlights threats currently facing the natural environment. Earlier this year, deforestation rates in the Amazon — the world’s largest rainforest —hit a record of three football fields per minute — the highest rate in a decade.

Entrance to the exhibit is free to the public until it closes at the end of October. The forest will be replanted in public spaces near the stadium to serve as a “living forest sculpture.”