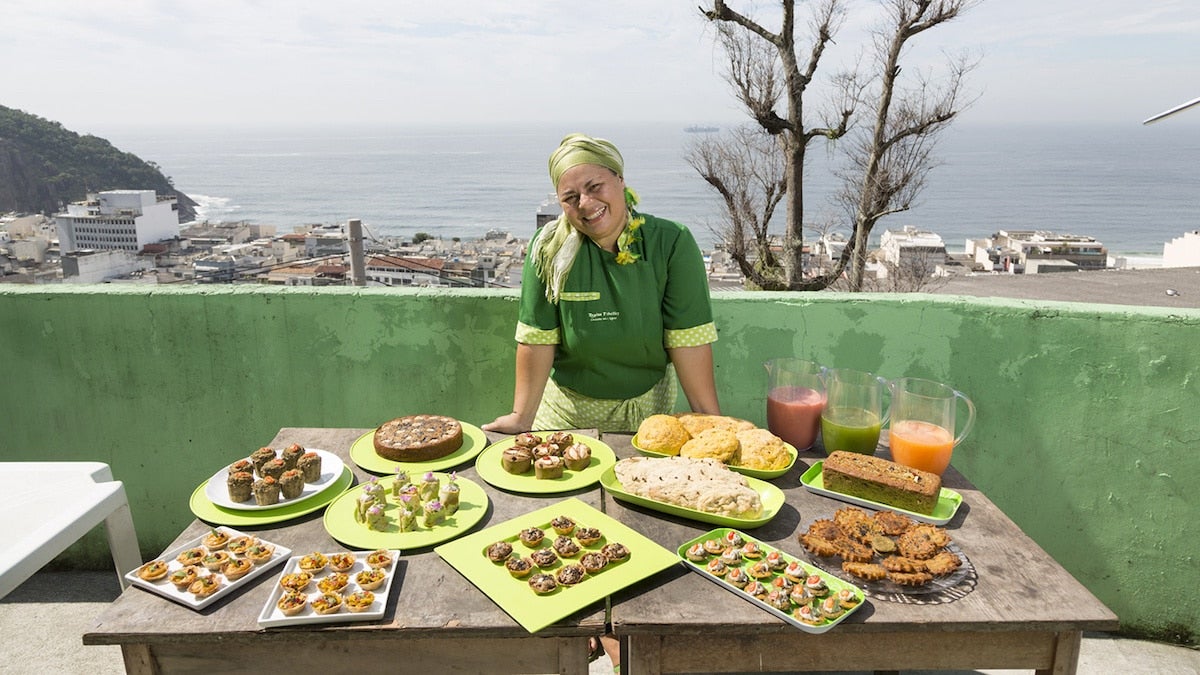 Chef Regina Tchelly with her food creations on her veranda, with Copacabana Beach in the background. Favela Organica

Take a dozen banana peels, wash them gently with a brush under running water, then chop them into small pieces. Next, blend the peels with five spoons of cacao and a cup of ice water. Once the lumps have been removed, place the mixture in a hot, buttered pan and stir it for five minutes. Let it cool down to thicken, and then roll the resulting dough into small spheres. Lastly, dip the balls into sesame or peanut powder, and you’ll have a brigadeiro, an iconic Brazilian dessert.

But this is not the standard version of the sweet: It’s a unique variant created by Regina Tchelly, a 39-year-old Brazilian chef and resident of Rio de Janeiro’s Babilônia slum.

“I always wanted to be a chef, but not a normal one,” Tchelly says.

In 2001, Tchelly moved from a small town in northeastern Brazil to the favelas, or slums, of Rio looking for a better future for her and her daughter. She initially worked as a housemaid, a common profession for women coming into the city from poorer areas. But the longer she shopped at the local markets, the more she grew disappointed by the amount of food being thrown out each day.

Back in her hometown, she had learned to use all parts of the fruits and vegetables she prepared, and she couldn’t make peace with the wastefulness of the city. She knew that the thrown-away peels, seeds, and rinds held precious nutritional value. Tchelly has since worked to give a second life to food that would otherwise go to waste. She shows that repurposing food waste is not only a solution to the problem of access to healthy food, but also one remedy to help address a broken social system. 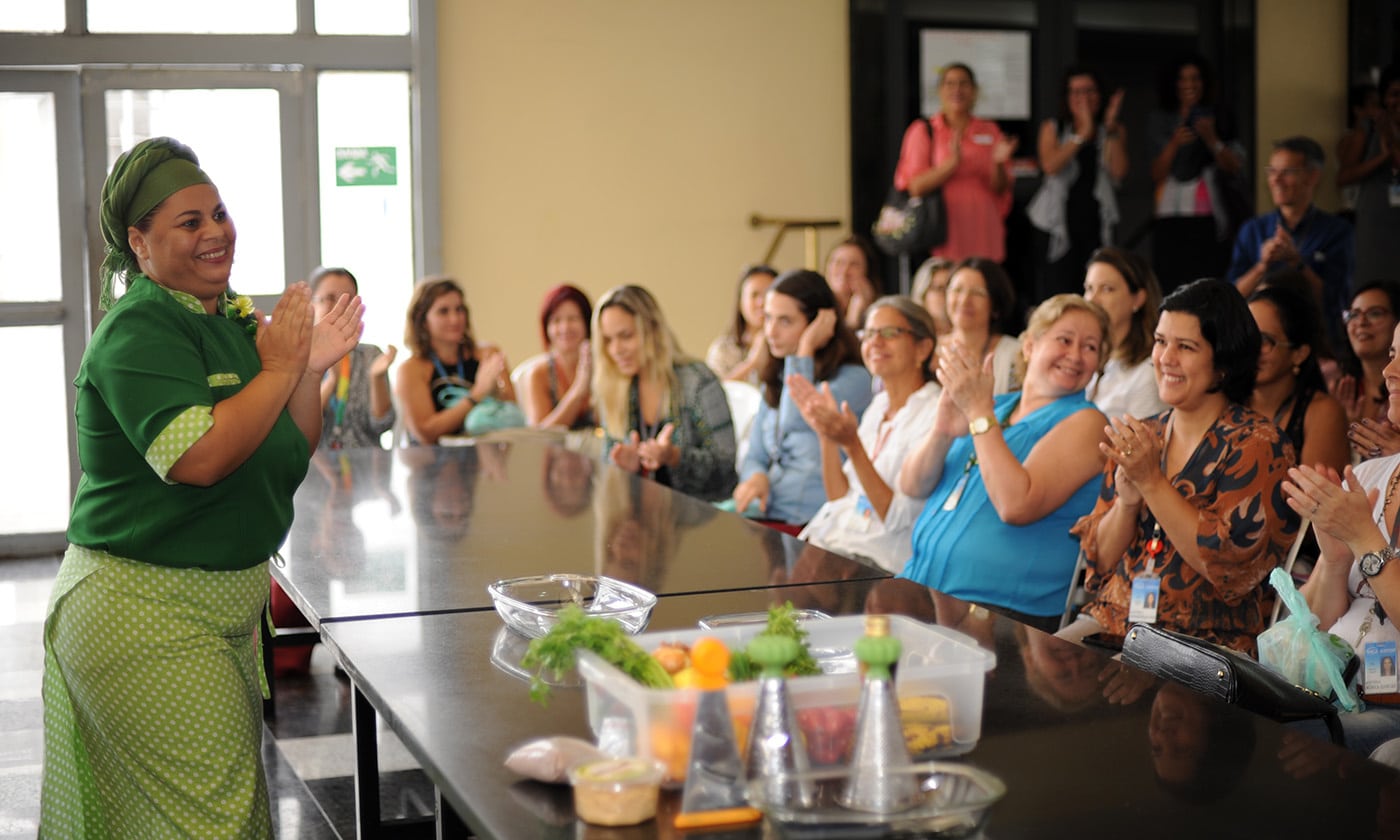 Regina Tchelly giving a talk about the impact of food on health in a Rio de Janeiro hospital. Favela Organica

The difficulty of making ends meet in rural areas of Brazil is one of the reasons for migration within the country. Small farmers leave their homes to crowd into the favelas of the megalopolis, where they can no longer afford the quality of food they used to produce on their land.

About 1.5 million people live in the slums of Rio de Janeiro, known as the Cidade maravilhosa, or city of wonder. Electricity, running water, and sanitation systems are often lacking in those informal settlements long neglected by the government, and life is tough for those who live in them. Food insecurity is one of the most significant divides between the favelas and wealthy areas of Rio: In the slums, many rely on government-subsidized schools, food banks, or junk food to feed their children.

It’s a matter of affordability rather than supply, though. Food abounds in Brazil. A 2014 study by the Food and Agriculture Organization listed Brazil as the world’s third-largest exporter of agricultural products. Yet 5 million people still suffer from malnutrition.

“My idea was to democratize real food, so to allow everybody to be able to access it,” Tchelly says.

In 2011, Tchelly gave her first course on how to cook with food scraps to six other housekeepers in her slum, which led her to create a social enterprise called Favela Organica. Her goal was to teach others how to repurpose food waste produced by Rio’s markets, and to learn how to grow produce on their balconies and in their yards. Tchelly’s project relies on the idea of an integrated food cycle: growing food, utilizing it all, and creating compost with what’s left to fertilize a garden. 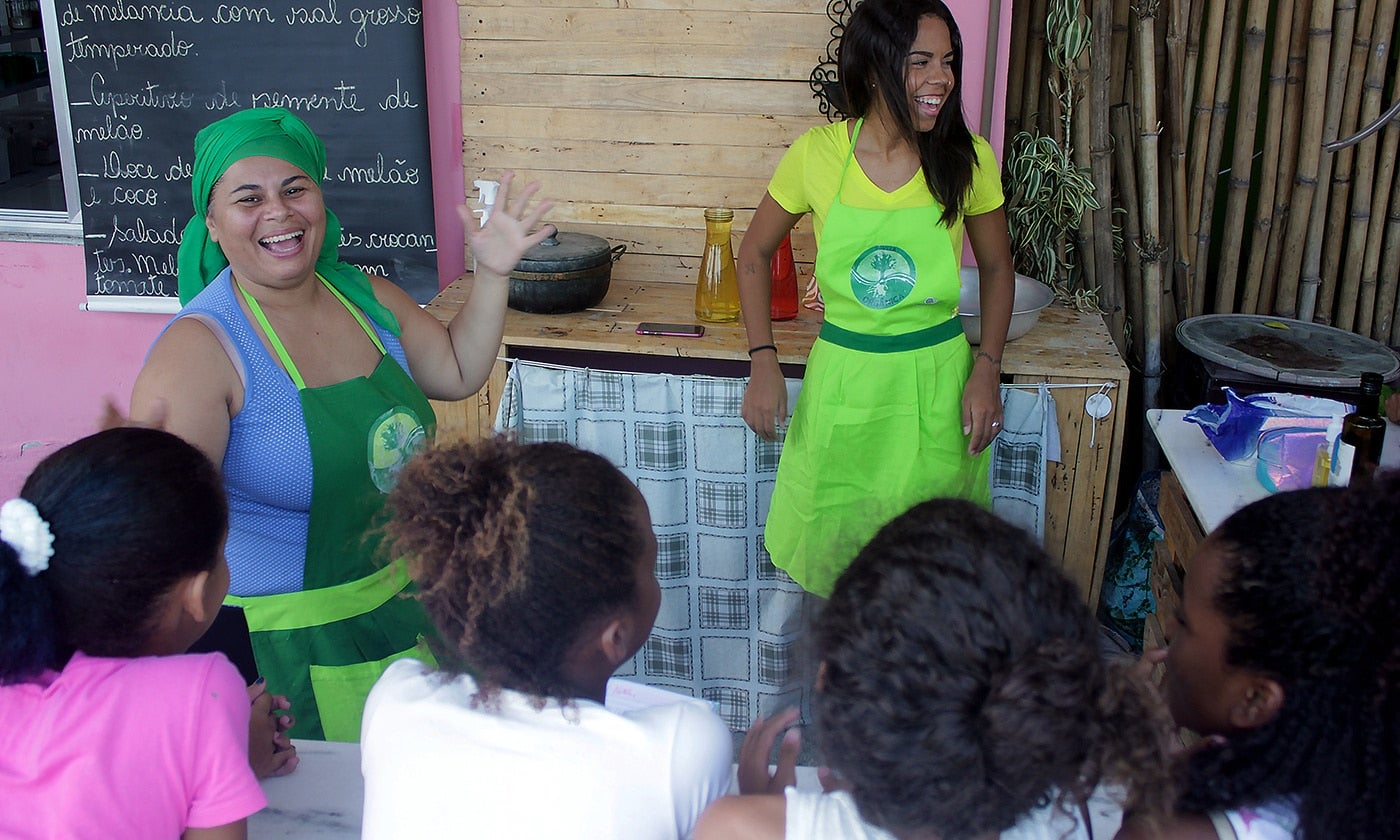 A class on how to use juicing residue for skin care. Favela Organica 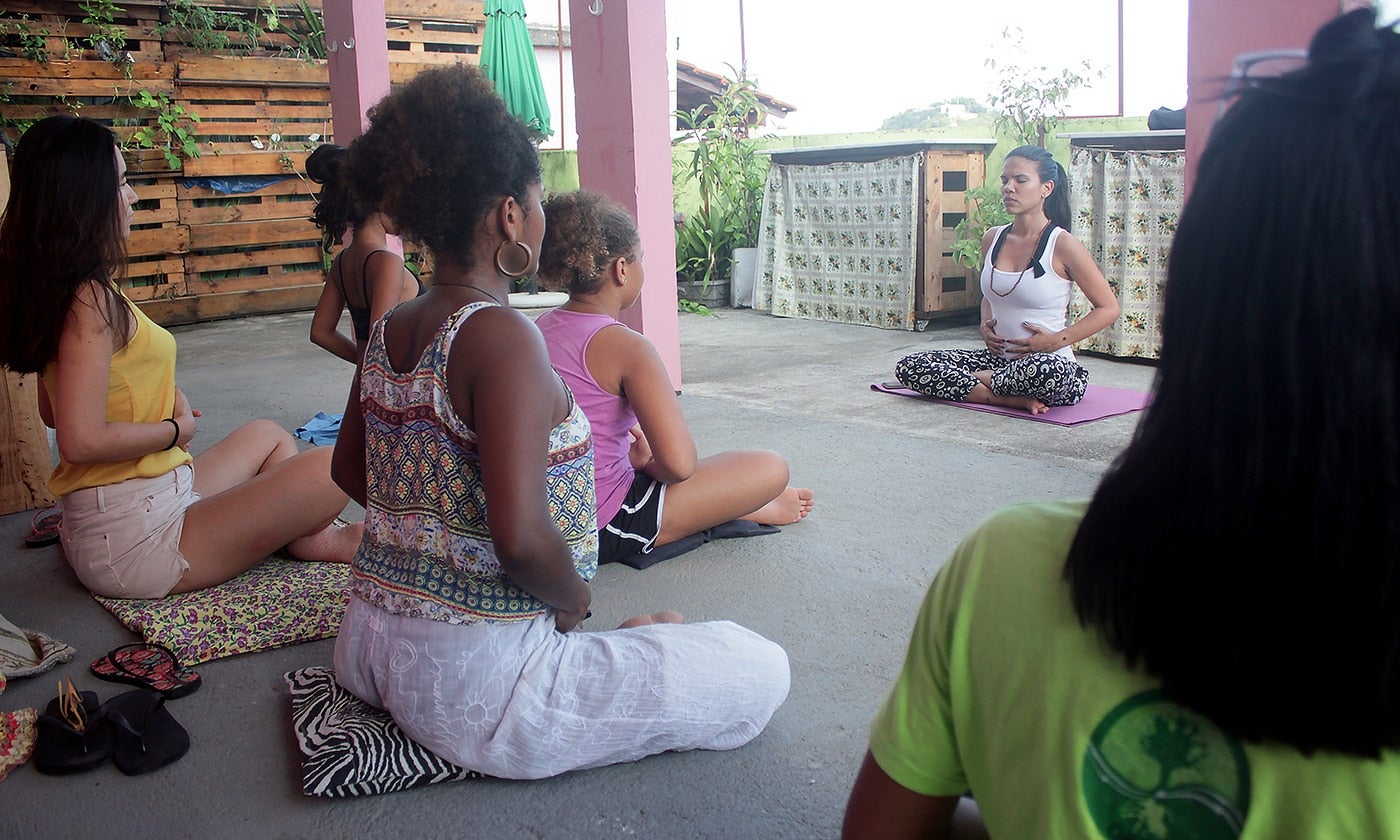 While Tchelly initially aimed at tackling food waste, her project soon turned into something more powerful. With the pandemic and the resulting food insecurity spreading widely within the crowded favelas, what Regina Tchelly ultimately provides is a way for people to gain dignity by making their own nutritious food. She’s part of the Terra Madre network, a global movement of food producers, chefs, and academics who believe that through a holistic approach to food, communities affected by systemic social disparities can regain power over what they eat, which is the first step towards self-determination.

The balcony of Favela Organica overlooks the famous Copacabana Beach. A small vegetable garden adds to the produce coming from local farmers who donate to Tchelly what they cannot sell. Tchelly’s workplace is a forest of hanging pans and pots, with a cooking station for two people and a larger space where she gave free classes to 60 people at a time — until the pandemic hit. Now she offers her courses online.

Tchelly supports the free lessons for residents of the favela. She covers her costs with the income earned from her high-end catering services and the money she receives from giving talks around the world, or winning prizes such as the Prêmio Aliança Empreendedora from the Brazilian Entrepreneurial Alliance. Over the years, Tchelly has built up enough recognition for her work that, in 2016, she was invited to San Paolo to give a TEDx Talk. Since she began offering courses, Tchelly has taught some 30,000 people, mostly women, around Brazil how to regain power over the food they eat.

The only requirement to attend Tchelly’s classes is that attendees must develop a new recipe to bring to market from the widely available food scraps of Rio de Janeiro. Last year, Ivonides Silva, 54, joined one of the classes.

“When you go to the market, you spend 10 reais () and use seeds, fruit, and everything else,” Silva says. By cooking this way, nothing goes to waste, and Silva has been saving money on groceries.

As her final project, Silva transformed pumpkin rinds and seeds — parts of the fruit that are usually thrown away — into flour, which she then used to bake a cake. Her classmates liked it, so she began selling more cakes to neighbors and at the salon where she works as a hairdresser. She now sells about five cakes each month, which adds 240 reais () to her income. If it wasn’t for the pandemic, Silva says, she could sell many more.

“Tchelly gives us the tools to have the autonomy to create a small business to make some money,” Silva says. In the slums of Rio de Janeiro, where people make on average 734 reais (0) a month, the supplementary income from the sale of cakes is a welcome help. 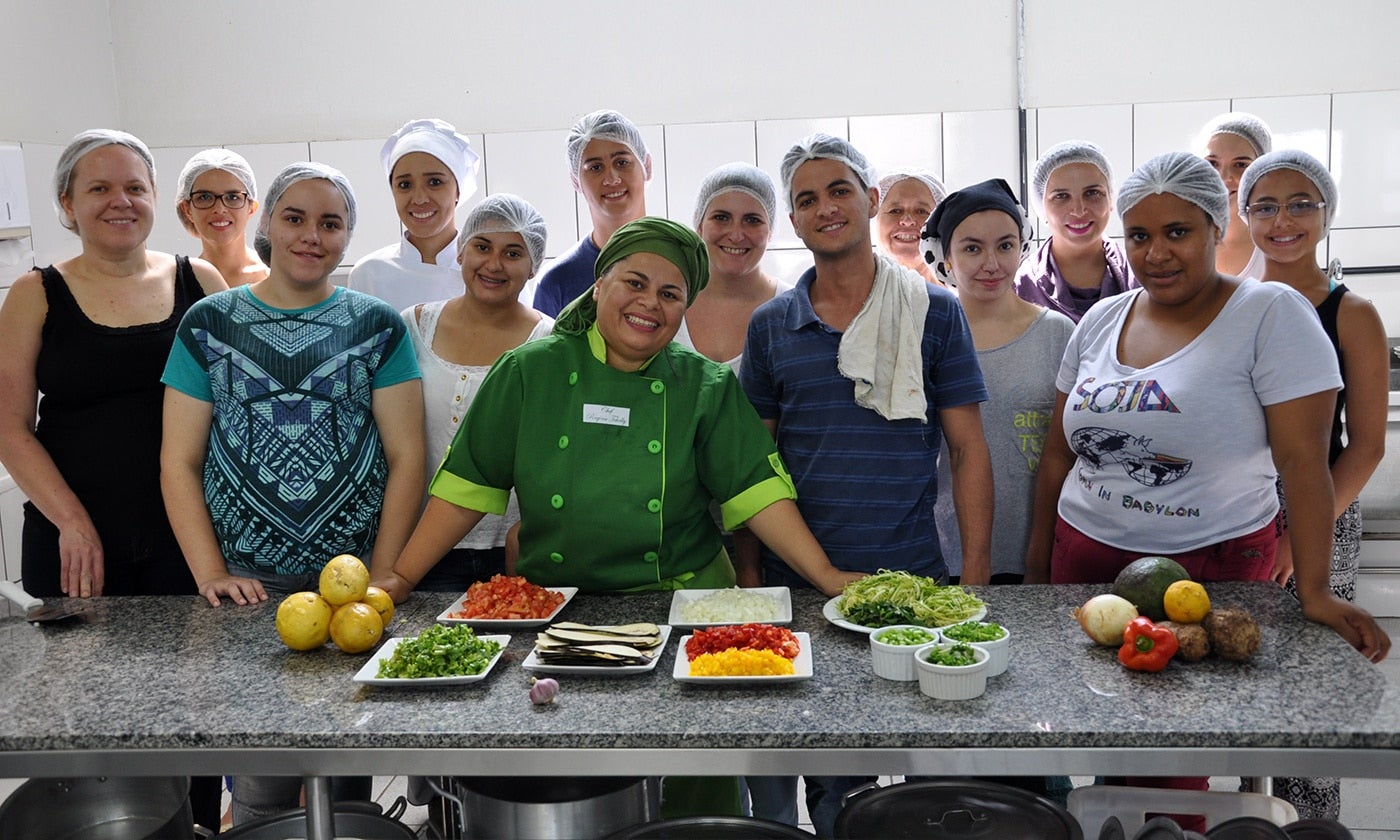 Tchelly at a food bank in Curitiba, Brazil, teaching how to make pumpkin risotto. Favela Organica

Maria Beatriz Martins Costa, CEO of Green Rio, a network that advocates for fairer and better food, is fond of Tchelly’s work, but told me that to have a greater impact, projects like Tchelly’s need more public support. According to a report by the International Institute of Sustainable Development, limited access to food is not the result of lack of food availability, but of its unaffordability for many Brazilians. The Brazilian government has worked toward reducing social inequality in the past two decades with programs like the Zero Hunger Program, which aims to give all Brazilians enough good and nutritious food through a series of multi-sectoral public policies. Thanks to this program, the country was removed from the FAO’s world hunger map in 2014.

But malnutrition problems remain, and the pandemic is accentuating them.

Growing one’s own food can help, which is why Tchelly and many other activists around the world also teach students how to grow urban gardens.

“This kind of agriculture is important because it gives you support,” says Costa, who sees urban gardens as another expression of family farming. She believes family farmers play an essential role in future food scenarios and are critical in diminishing food and social disparities. About 77% of Brazil’s farmers are family farmers (as opposed to agribusinesses), but they receive only 36% of the total industry revenues. According to Costa, the difference in income between small and large farms is partly because of a lack of logistics to distribute products and infrastructures to scale up. 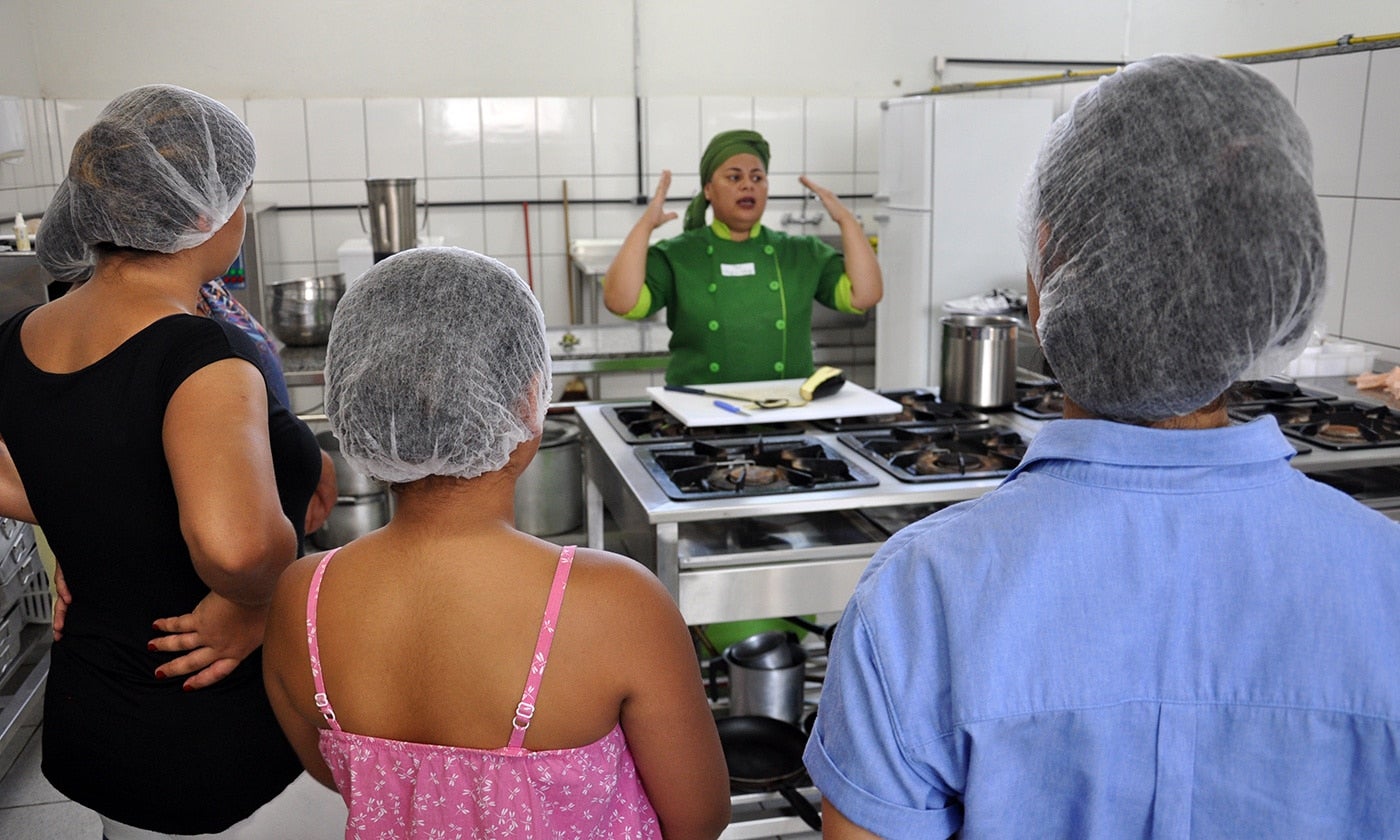 Tchelly teaching a class at a food bank in Curitiba, Brazil, on how to use all parts of the produce. Favela Organica

“Public policies are fundamental,” Costa says. Over the past 20 years, Brazil has constructed a robust food security policy that includes Safra, a credit program for family farmers, and a program that pushed schools to buy food from local small farms. But in 2019, the current government, led by President Jair Bolsonaro, eliminated the Consea, Conselho Nacional de Segurança Alimentar e Nutricional — a body that allowed Brazilian civil society to have a say in the formulation of food policies — a move that many fear is the first step toward deconstructing the country’s food security policy.

Still, Costa believes that Brazil, with all its flaws, is working toward issuing policies that promote family farmers. For example, the country’s current secretary for Family Agriculture and Cooperation, Fernando Schwanke, has created the first bioeconomy plan for biodiversity and family farming. Such policies, combined with entrepreneurial efforts like Tchelly’s, could brighten Brazil’s food future.

“Regina Tchelly was a pioneer and game-changer and deserves all credit as being a forerunner fighting for a change in the food system,” Costa says. Tchelly, with her daily fieldwork, represents a larger, and often unseen, global movement that focuses on the roots of nutrition inequalities. Together, they are working to provide access to fairer, cleaner, and better food for all.