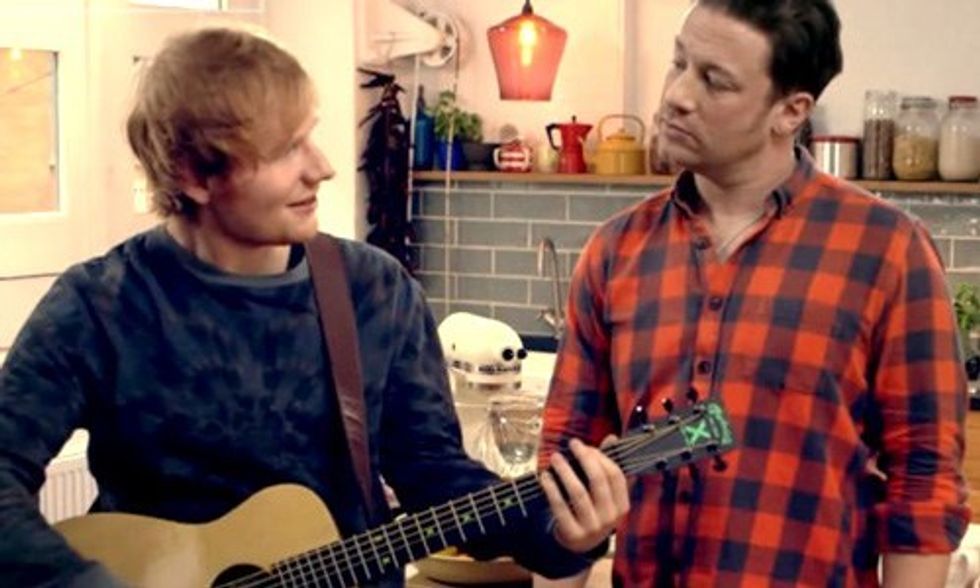 Jamie Oliver has been a devoted healthy food advocate for years now. He has launched television shows and a web series, penned several books, and owns multiple restaurants—all part of his global food revolution.

May 15 was Food Revolution Day, organized by Oliver to "celebrate fresh, nutritious food, and to teach children in a fun way about where their food comes from, how to cook it and how it affects their bodies," according to the Jamie Oliver Foundation. "It’s a day to shout out about the need for compulsory practical food education for every child in every school."

And what's the best way for a grassroots organization to get its message out? Have a bunch of celebrities make a video, of course. Oliver enlisted Ed Sheeran, who has won numerous awards recently, including Songwriter Of The Year at the Ivor Novello Awards and People's Choice Award for Favorite Male Artist.

Sheeran wrote the song and it's performed by Oliver along with Sir Paul McCartney, Alesha Dixon, Jazzie B, Professor Green, Jamie Cullum, George The Poet, Us The Duo, Che’nelle, DJ MK, Mr Hudson, The London Youth Choir and Hugh Jackman. Wow, that's a lot of celebrities!

The goal of the video and the larger campaign, which Oliver says has more than 1 million supporters, is to put mandatory food curriculum in schools around the world to fight obesity and other diet-related diseases, according to TIME.

You can just tell they had a lot of fun making this video, and it's all for a great cause. Check it out:

Could Earthworms Save the Climate?