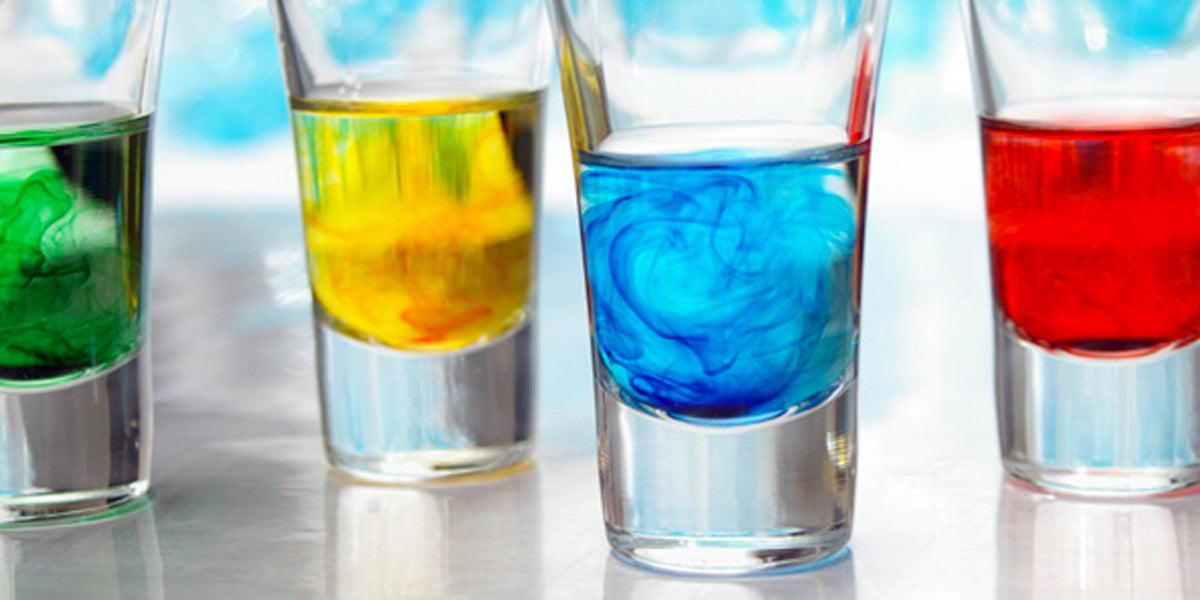 Artificial food dyes are responsible for the bright colors of candy, sports drinks and baked goods.

They’re even used in certain brands of pickles, smoked salmon and salad dressing, as well as medications.

In fact, artificial food dye consumption has increased by 500 percent in the last 50 years and children are the biggest consumers (1, 2, 3).

Claims have been made that artificial dyes cause serious side effects, such as hyperactivity in children, as well as cancer and allergies.

The topic is highly controversial and there are many conflicting opinions about the safety of food dyes. This article separates the fact from fiction.

What Are Food Dyes?

Food dyes are chemical substances that were developed to enhance the appearance of food by giving it artificial color.

People have added colorings to food for centuries, but the first artificial food colorings were created in 1856 from coal tar.

Nowadays, food dyes are made from petroleum.

Over the years, hundreds of artificial food dyes have been developed, but a majority of them have since been found to be toxic. There are only a handful of artificial dyes that are still used in food.

However, there is quite a bit of controversy regarding the safety of artificial food dyes. All of the artificial dyes that are currently used in food have gone through testing for toxicity in animal studies.

Regulatory agencies, like the U.S. Food and Drug Administration (FDA) and the European Food Safety Authority (EFSA), have concluded that the dyes do not pose significant health risks.

Not everyone agrees with that conclusion. Interestingly, some food dyes are deemed safe in one country, but banned from human consumption in another, making it extremely confusing to assess their safety.

Bottom Line: Food dyes are petroleum-derived substances that give color to food. The safety of food dyes is highly controversial.

Dyes That Are Currently Used in Food

The following food dyes are approved for use by both the EFSA and the FDA (4, 5):

A few other dyes are approved in some countries, but banned in others. Green No. 3, also known as Fast Green, is approved by the FDA but banned in Europe.

Quinoline Yellow, Carmoisine and Ponceau are examples of food colorings allowed in the EU but banned in the US.

Bottom Line: There are six artificial food dyes that are approved by both the FDA and the EFSA. Red 40, Yellow 5 and Yellow 6 are the most common.

Food Dyes May Cause Hyperactivity in Sensitive Children

In 1973, a pediatric allergist claimed that hyperactivity and learning problems in children were caused by artificial food colorings and preservatives in food.

At the time, there was very little science to back up his claim, but many parents adopted his philosophy.

The doctor introduced an elimination diet as a treatment for attention deficit hyperactivity disorder (ADHD). The diet eliminates all artificial food colorings, along with a few other artificial ingredients.

One of the earliest studies, published in 1978, found no changes in children’s behavior when they were given a dose of artificial food dyes (6).

Since then, several studies have found a small but significant association between artificial food dyes and hyperactivity in children (1).

One clinical study found that removing artificial food dyes from the diet, along with a preservative called sodium benzoate, significantly reduced hyperactive symptoms (7).

A small study found that 73 percent of children with ADHD showed a decrease in symptoms when artificial food dyes and preservatives were eliminated (8).

Another study found that food dyes, along with sodium benzoate, increased hyperactivity in both 3-year-olds and a group of 8- and 9-year-olds (9).

However, because these study participants received a mixture of ingredients, it is difficult to determine what caused the hyperactivity.

Tartrazine, also known as Yellow 5, has been associated with behavioral changes including irritability, restlessness, depression and difficulty with sleeping (10).

What’s more, a 2004 analysis of 15 studies concluded that artificial food dyes do increase hyperactivity in children (11).

Yet it appears that not all children react the same way to food dyes. Researchers at Southampton University found a genetic component that determines how food dyes affect a child (12).

While effects from food dyes have been observed in children with and without ADHD, some children seem much more sensitive to dyes than others (1).

Despite this, both the FDA and the EFSA have stated there is currently not sufficient evidence to conclude that artificial food dyes are unsafe.

Their regulatory agencies work on the premise that a substance is safe until proven harmful. However, there is certainly sufficient evidence to raise some concern.

Interestingly, in 2009 the British government began encouraging food manufacturers to find alternative substances to color food. As of 2010, in the UK a warning is required on the label of any food that contains artificial food dyes.

Bottom Line: Studies suggest there is a small but significant association between artificial food dyes and hyperactivity in children. Some children seem to be more sensitive to dyes than others.

Do Food Dyes Cause Cancer?

The safety of artificial food dyes is highly controversial.

However, the studies that have evaluated the safety of food dyes are long-term animal studies.

Nevertheless, other dyes may be more concerning.

Concerns About Blue 2 and Red 3

An animal study on Blue 2 found a statistically significant increase in brain tumors in the high-dose group compared to the control groups, but the researchers concluded there was not enough evidence to determine whether Blue 2 caused the tumors (20).

Erythrosine, also known as Red 3, is the most controversial dye. Male rats given erythrosine had an increased risk of thyroid tumors (23, 24).

Based on this research, the FDA issued a partial ban on erythrosine in 1990, but later removed the ban. After reviewing the research, they concluded that the thyroid tumors were not directly caused by erythrosine (24, 25, 26, 27).

In the U.S., Red 3 has mostly been replaced by Red 40, but it is still used in Maraschino cherries, candies and popsicles.

Some Dyes May Contain Cancer-Causing Contaminants

While most food dyes did not cause any adverse effects in toxicity studies, there is some concern about possible contaminants in the dyes (28).

Red 40, Yellow 5 and Yellow 6 may contain contaminants that are known cancer-causing substances. Benzidine, 4-aminobiphenyl and 4-aminoazobenzene are potential carcinogens that have been found in food dyes (3, 29, 30, 31, 32).

These contaminants are allowed in the dyes because they are present in low levels, which are presumed to be safe (3).

Artificial food dye consumption is on the rise, especially among children. Consuming too much food dye containing contaminants could pose a health risk.

However, with the exception of Red 3, there is currently no convincing evidence that artificial food dyes cause cancer.

Nevertheless, note that most of the studies evaluating the safety of food dyes were performed decades ago.

Since then, the intake of dyes has dramatically increased and often multiple food dyes are combined in a food, along with other preservatives.

Bottom Line: With the exception of Red 3, there is currently no conclusive evidence that artificial food dyes cause cancer. More research needs to be done based on the increasing consumption of food dyes.

Do Food Dyes Cause Allergies?

Interestingly, people who have an allergy to aspirin seem to be more likely to also be allergic to Yellow 5 (37, 38).

In a study conducted in people with chronic hives or swelling, 52 percent had an allergic reaction to artificial food dyes (40).

Most allergic reactions are not life-threatening. However, if you have symptoms of an allergy, it may be beneficial to remove artificial food dyes from your diet.

Red 40, Yellow 5 and Yellow 6 are among the most commonly consumed dyes and are the three most likely to cause an allergic response (3).

Should You Avoid Food Dyes?

The most concerning claim about artificial food dyes is that they cause cancer.

However, the evidence to support this claim is weak. Based on the research currently available, it is unlikely that consuming food dyes will cause cancer.

Certain food dyes cause allergic reactions in some people, but if you do not have any symptoms of an allergy, there is no reason to eliminate them from your diet.

The claim about food dyes that has the strongest science to back it up is the connection between food dyes and hyperactivity in children.

Several studies have found that food dyes increase hyperactivity in children with and without ADHD, although some children seem to be more sensitive than others (1).

If your child has hyperactive or aggressive behavior, it may be beneficial to remove artificial food dyes from their diet.

The reason dyes are used in food is to make food look more attractive. There is absolutely no nutritional benefit of food dyes.

Nevertheless, there is not enough evidence to support that everyone should be avoiding artificial food dyes.

That said, it always helps to eat healthy. The biggest sources of food dyes are unhealthy processed foods that have other negative effects on health.

Removing processed foods from your diet and focusing on healthy whole foods will improve your overall health and drastically decrease your intake of artificial food dyes in the process.

Bottom Line: Food dyes are likely not dangerous for most people, but avoiding processed foods that contain dyes can improve your overall health.

The best way to remove artificial food dyes from your diet is to focus on eating whole, unprocessed foods.

Unlike processed foods, most whole foods are highly nutritious.

Here are a few foods that are naturally dye-free:

If you want to avoid all dyes in your diet, always read the label before you eat a food. Some seemingly healthy foods contain artificial food dyes.

There is no conclusive evidence that food dyes are dangerous for most people.

Nevertheless, they may cause allergic reactions in some people and hyperactivity in sensitive children.

However, most food dyes are found in unhealthy processed foods that should be avoided anyway.

Instead, focus on eating nutritious whole foods that are naturally dye-free.