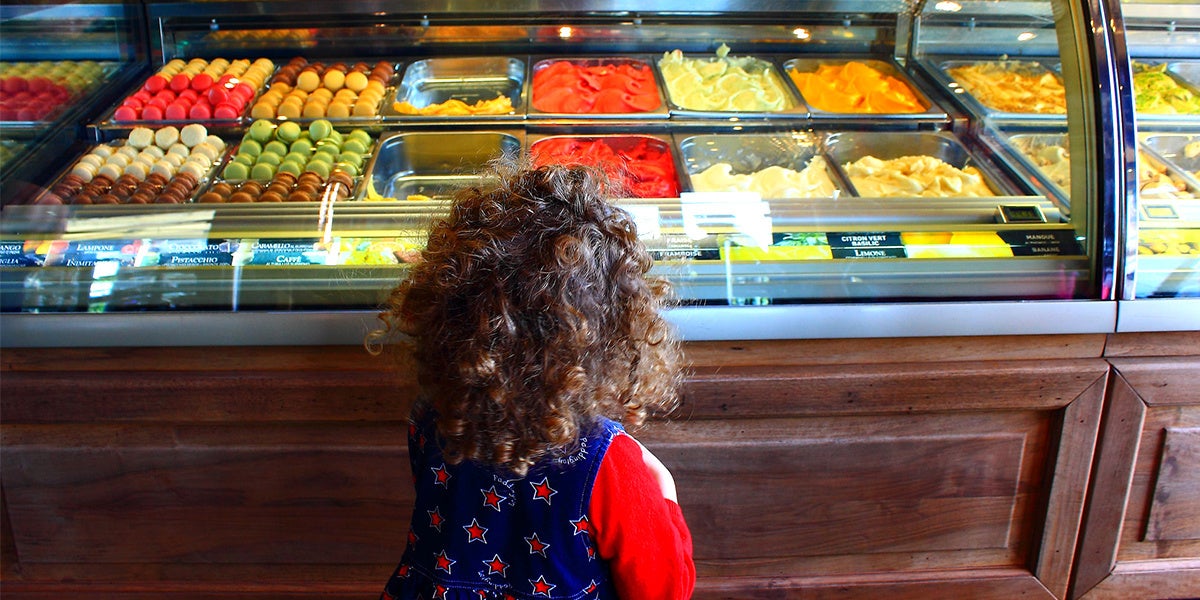 By Annie B. Bond

Birthday cakes with all the colors of the rainbow were the touchpoint that would change our friendly and gentle daughter into a belligerent crank puss for a few hours after eating her slice. We always braced for the aftermath of the birthday parties. Given that we didn’t serve meals with FD&C food dyes at home, it wasn’t too hard to track down the cause of her dramatic behavior changes as they only happened under isolated circumstances.

Anecdotal evidence, yes. But I surely paid attention when I heard that in 2007 the EU required a label on foods containing synthetic food dyes that states the product “may have an adverse effect on activity and attention in children.” In 2011 in the U.S., however, the Food and Drug Administration held a Food Advisory Committee Meeting about certified color additives, and while they determined that more study is needed, labels alerting hyperactivity in children was unwarranted.

Where does the division of the EU and the U.S. recommendations leave parents? To make up our own minds, draw our own conclusions and make our own choices.

Chemical food dyes have a long, nefarious and toxic history. They were used to disguise rotting food and adulterate food’s appearance in general. In the 1800s, people died or were sickened after being poisoned from dyes made of heavy metals such as lead and arsenic.

We have butter to thank for the practice of a more widespread use of food dyes. Until the end of the 19th and early 20th centuries, the color of butter naturally varied with the seasons. It was yellow in the spring and summer when cows ate foods rich in yellow carotenoids, and white in the fall and winter when they were fed corn that is low in such carotenoids. It was a breakthrough for dairies when they could make butter the same color year-round. These new and increasingly popular synthetic dyes were less costly and more stable than natural colors made from plants and minerals, but there was a downside: They were made with toxic coal tar.

Coal tar started to be widely used for consumer products including food dyes in the industrial revolution, though in 1775 coal tar was linked to “chimney sweep carcinoma,” one of the first chemicals to be linked to cancer from occupational exposure. Coal tar is made by combining aromatic hydrocarbons such as toluene, xylene, benzene, and petroleum distillates, and has high amounts of the ubiquitous environmental pollutants, polyaromatic hydrocarbons (PAHs).

In the U.S., the Pure Food and Drug Act of 1906 reduced the permitted list of synthetic coal tar colors from 700 down to seven. According to the FDA, those dyes for food use are chemically classified as azo, xanthene, triphenylmethane, and indigoid dyes. Although certifiable color additives have been called coal-tar colors because of their traditional origins, today they are synthesized mainly from raw materials obtained from petroleum.

The current nine artificial colorings permitted by the FDA in food are:

The two FD&C dyes called out for hyperactivity in children are Red #40 and Yellow #5. An NIH study recommends that since current dyes do not improve the safety or nutritional quality of foods, all of the currently used dyes should be removed. There is a general agreement that there is inadequate testing for FD&C dyes.

What tests there are on how food dyes affect behavior seem to show that some children are genetically vulnerable to behavioral changes from dyes and that a smaller subset have very strong reactions.

“In Europe, that’s enough to get it banned because a manufacturer has to show lack of toxic effects,” said Bernard Weiss, professor emeritus of the Department of Environmental Medicine at the University of Rochester Medical Center. “In this country, it’s up to the government to find out whether or not there are harmful effects.” Weiss supports banning artificial colors until companies have evidence that they cause no harm.

“The fundamental problem is that good research studies about food dyes are very hard to do. The default position of the regulatory industries seems to be that food dyes are safe until proven otherwise,” notes Dr. Kathleen Berchelmann.

In 1965, Dr. Ben F. Feingold, a pediatrician and chief of allergy at the Kaiser Permanente Medical Centers in Northern California, was way ahead of his time in seeing a biochemical relationship to behavior. His hypothesis was that “hyperactivity can be triggered by synthetic additives—specifically synthetic colors, synthetic flavors and the preservatives BHA, BHT (and later TBHQ)—and also a group of foods containing a natural salicylate radical. This is an immunological—not an allergic—response.”

Feingold went on to develop the famous Feingold Diet, removing food additives including artificial coloring. The Internet is overflowing with success stories written by grateful parents. The Feingold site has an impressive compellation of studies on the topic. The diet’s benefits are still controversial, but the Feingold Association claims that more than 50 percent to more than 90 percent of children responded well to the diet.

Imagine the array of colors in heirloom foods and plants of all kinds that could be used for natural dyes, just as they had been for centuries by weavers. For example, a natural match for Red #40 can be made from beets, elderberry, and even purple sweet potatoes.

The FDA has a broad list of approved natural colors that are exempt from certification, including beets, caramel, B-Carotene, cochineal extract, carmine, grape color, turmeric, paprika and more.

Parents like me who decided to follow the evidence before our eyes, that Yellow #5 and Red #40 caused behavioral changes in our children, look far and wide for natural food substitutes for those with these synthetic additives. It was wonderful when a candy shaped like an M&M but dyed with natural colors came on the market.

Baking with blueberry and beet juice becomes a common way to bring festive colors to holiday baked goods in households like mine. A child standing on a chair to be tall enough to stir the bowl hardly knows the difference between that and the commercial FD&C food coloring kits.

Experimenting with natural dyes can be a fun family adventure. You can juice spinach for green, carrots for orange—the list is as endless as the beautiful colors found in nature. Natural dyes are less neon, more nuanced, and can be very beautiful.

Once you have the colors you want to use, here, below, is how you can use them in baking. This one example for making red baked goods can be used for any color.

Choose any red juice that stains clothing! Examples include beets, strawberries, raspberries and cherries. Canned beets work effectively. Just drain the juice to use. Alternatively, thaw some frozen berries in a bowl and you’ll find that there will be plenty of juice.

Substitute in equal measure the amount of juice you are using from the recipe’s liquid. If the recipe doesn’t include liquid, add enough additional flour to help absorb the liquid.