Chipotle Launches Tool to Tell You the ‘Foodprint’ of Each Ingredient 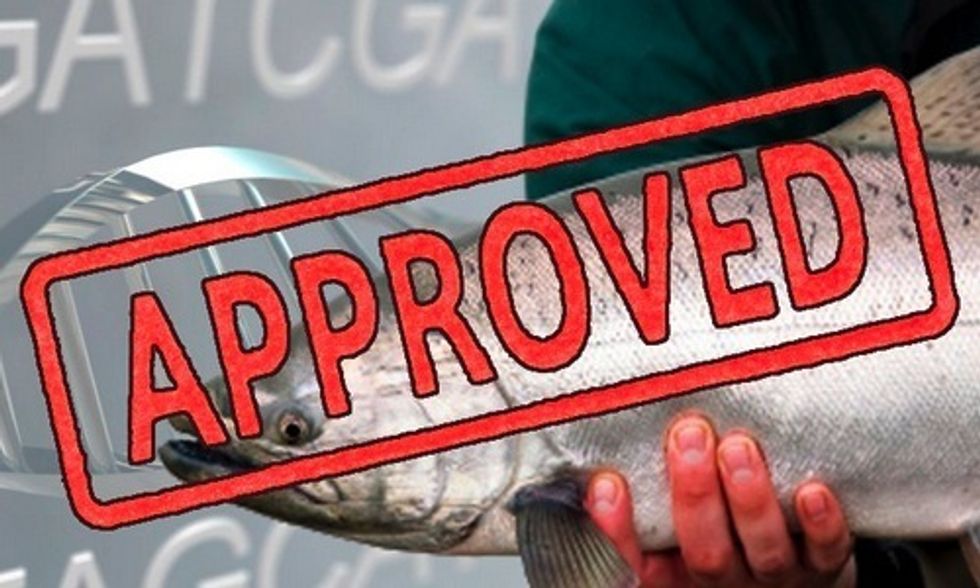 The Center for Food Safety, an nonprofit organization, announced plans to sue the federal agency. Grocery store chains around the country have also made commitments to not sell the controversial fish.

“The fallout from this decision will have enormous impact on the environment. Center for Food Safety has no choice but to file suit to stop the introduction of this dangerous contaminant,” said Andrew Kimbrell, executive director of Center for Food Safety. “FDA has neglected its responsibility to protect the public.”

The FDA has since repsonded to the petition with a 35-page document that denies the Center for Food Safety's request. It states:

Further, while we appreciate consumer interest in the labeling of food derived from genetically engineered plants, consumer interest alone does not provide a sufficient basis to require labeling disclosing whether a food has been produced with or without the use of such genetic engineering.

AquaBounty's salmon is genetically altered to grow to market size in half the time of conventional salmon. According to Reuters, "the fish is essentially Atlantic salmon with a Pacific salmon gene for faster growth and a gene from the eel-like ocean pout that promotes year-round growth."

It will take about two more years to reach the market as distribution is being worked out, the Massachusetts-based company says.

Still, this GMO food fight is getting heated. The Center for Food Safety pointed out that millions of Americans and more than 40 members of Congress have expressed vocal opposition of GMO salmon.

Nearly 2 million people filed public comments opposing the approval of GMO salmon by the FDA, the largest number of comments the FDA has ever received on an action.

Some people might be wondering whether this fish will make it onto plates since "more than 60 grocery store chains representing more than 9,000 stores across the U.S. have made commitments to not sell the GMO salmon, including Safeway, Kroger, Target, Trader Joe’s, Whole Foods, Aldi and many others," according to the environmental nonprofit, Friends of the Earth.

However, many Big Food grocers are absent from this list. Costco, one of the largest retailers of salmon and seafood in the U.S., remains open to selling GMO salmon despite vehement opposition from activists. Similarly, Walmart, the country's largest supermarket chain (which accounts for 15 percent of fresh food sales in the U.S.), has not announced whether or not it will sell GMO salmon.

Additionally, a lack of GMO labeling laws might mean that consumers will not have a choice over the matter. AquAdvantage Salmon, the trade name for the genetically modified Atlantic salmon developed by AquaBounty Technologies, will not require a GMO label under FDA guidelines.

Wenonah Hauter, the executive director of Food & Water Watch, wrote after yesterday's announcement from the FDA:

"To add insult to injury, this product will be hitting store shelves without labeling, making it impossible for concerned consumers to distinguish GMO from non-GMO salmon. Not only does this ignore consumers’ fundamental right to know how our food is produced, it is simply bad for business, since many consumers will avoid purchasing any salmon for fear it is genetically engineered."

Critics of GMO salmon have called it "frankenfish" and have made their feelings about it very clear, as seen in this video:

“Despite FDA’s flawed and irresponsible approval of the first genetically engineered animal for human consumption, it’s clear that there is no place in the U.S. market for genetically engineered salmon,” said Lisa Archer, food and technology program director at Friends of the Earth. “People don’t want to eat it and grocery stores are refusing to sell it.”

Scott Faber, executive director of Just Label It, said that the decision to approve GMO salmon without a mandatory disclosure is "yet another example of how FDA’s outdated policy keeps consumers in the dark."

The FDA as well as many major food companies maintain that GMO foods are safe for consumption and for the environment and that mandatory GMO labels would be misleading. As EcoWatch reported in October, Big Food has spent millions of dollars and extensively lobbied lawmakers for a national ban on GMO labels ... and it might actually happen.

The U.S. House of Representatives voted in favor of H.R. 1599 in July, which bans states from requiring GMO labels on food. It also blocks the FDA from ever implementing mandatory GMO food labeling and allows food companies to continue to make “natural” claims for foods containing GMO ingredients. The bill has been dubbed the “Deny Americans the Right to Know” Act or DARK Act by opponents. A Senate version of the bill could hit the floor in the coming weeks.

“Consumers will have no way of knowing whether the salmon they are buying comes from nature or comes from a lab," Faber added. "It makes sense to give consumers the right to know and to choose whether this fish, or any other food that contains GMO ingredients, is right for their dinner table.

“A non-judgmental, factual disclosure of the presence of GMOs is all we are asking for. FDA’s continued reliance on voluntary labeling schemes will only further consumer confusion. It’s time the federal government trusted American consumers enough to make their own decisions about this novel technology."

The debate over the FDA's approval of GMOs raises questions about the future of our food. As Ecowatch reported earlier this month, in addition to GMO salmon, there are two different varieties of GMO pork that are currently in development: a pig that is “edited” with a warthog gene to resist African swine fever; and a “double-muscled” designed to have leaner meat and have a higher yield of meat per animal.

Genetically engineered cows are also in development: one that produces B-lactoglobulin-free milk (which causes allergies and digestive and respiratory reactions in infants), and another type of cow that has been genetically modified to be born without horns to reduce the risk of injury to farmers and other animals.

Jordan Davidson
Climate
Residents get in a car after leaving their homes to move to evacuation centers in central Vietnam's Quang Nam province on Oct. 27, 2020, ahead of Typhoon Molave's expected landfall. MANAN VATSYAYANA / AFP via Getty Images

Typhoon Molave is expected to make landfall in Vietnam on Wednesday with 90 mph winds and heavy rainfall that could lead to flooding and landslides, according to the U.S. Embassy and U.S. Consulate in Ho Chi Minh City. To prepare for the powerful storm that already tore through the Philippines, Vietnam is making plans to evacuate nearly 1.3 million people along the central coast, as Reuters reported.

Chipotle Launches Tool to Tell You the ‘Foodprint’ of Each Ingredient

How does your burrito impact the environment? If you ordered it from Chipotle, there is now a way to find out.

Are you noticing your shirts becoming too tight fitting to wear? Have you been regularly visiting a gym, yet it seems like your effort is not enough? It's okay to get disappointed, but not to lose hope.

A pair of studies released Monday confirmed not only the presence of water and ice on the moon, but that it is more abundant than scientists previously thought. Those twin discoveries boost the prospect of a sustainable lunar base that could harvest the moon's resources to help sustain itself, according to the BBC.