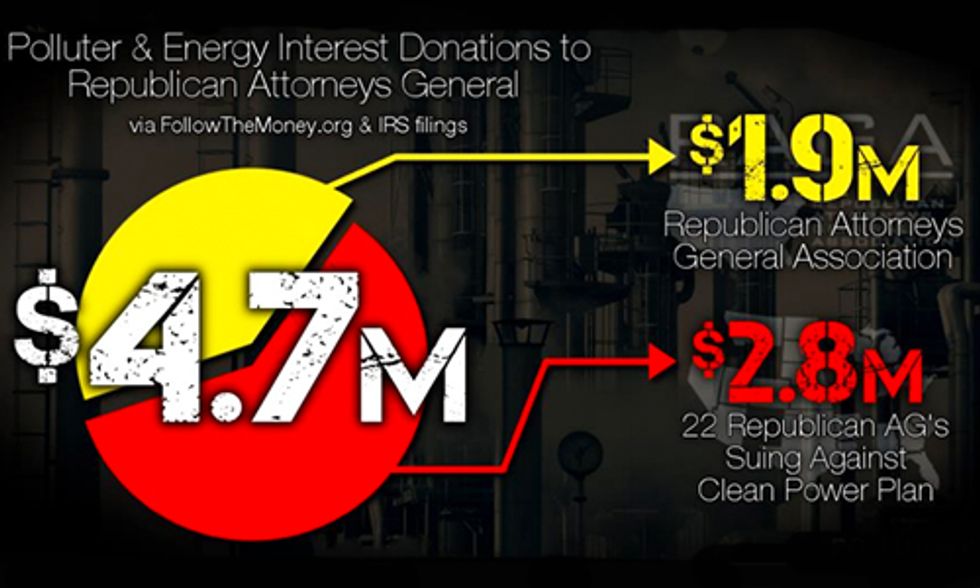 By Americans United for Change

Marking the anniversary of the U.S. Environmental Protection Agency's (EPA) 2014 proposal of the Clean Power Plan, Americans United for Change released a new report Thursday. The report exposes behind the scenes coordination and details the depths of donations from polluters and energy interests who have funded a lawsuit against the EPA's plan using Republican Attorneys General from around the country as their high-priced legal team.

The report, Polluter Impunity, is part of Americans United for Change's Polluters Over People campaign and shows how deeply tied Republican Attorneys General are to industries like coal and oil. A December 2014 New York Times exposé revealed an “unprecedented, secretive alliance" and coordination between Big Oil and Republican Attorneys General against environmental safeguards, including one Attorney General literally copying and pasting a letter drafted by energy lobbyists and sending it to the EPA on official letterhead.

The EPA's plan would cut heat-trapping carbon dioxide pollution by 32 percent from 2005 levels by 2030, save the average American $200 a year on their energy bills, bring down health costs associated with asthma attacks, lung cancer and other air pollution-related illnesses and pave the way for 250,000 new jobs when fully implemented.

Yet even considering the Clean Power Plan's long list of benefits, the position of these Republican Attorneys General on the payroll for polluters becomes more indefensible when you consider how strongly at odds it puts them with the will of their own constituents who know that addressing climate change is no longer up for debate. Poll after poll has shown that voters support measures to address climate change, as well as elected officials willing to take action. In fact, in the home states of the Attorneys General bringing the lawsuit against the EPA, 61 percent of the public supports the Clean Power Plan.

But while they've already lost in the court of public opinion, big polluters and their allies in the Republican Attorneys General Association think they can use the courts to stop the Clean Power Plan despite its strong basis in existing law and the fact that the U.S. Supreme Court has upheld the EPA's authority to take action to limit carbon pollution three times. Even George W. Bush's former EPA head Christine Todd Whitman testified that the “EPA does have the authority" to go forward with a policy she called the “most flexible thing" the agency has ever done.

The key findings of the report include: