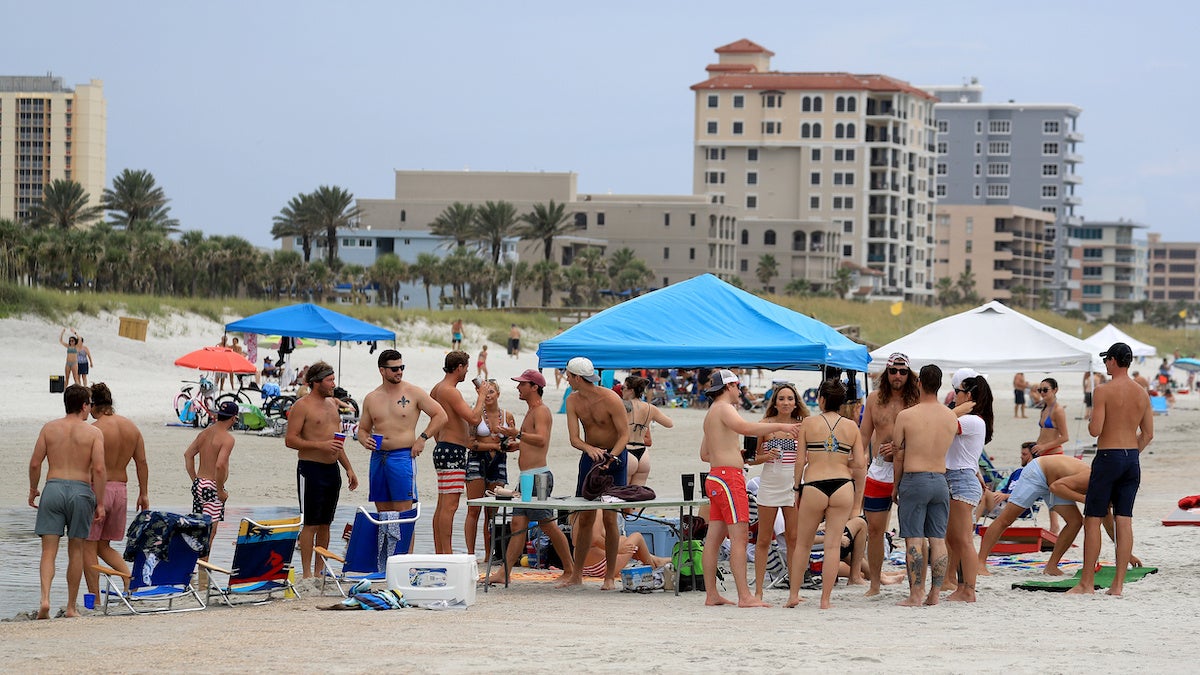 Florida broke the national record for the most new coronavirus cases reported in a single day on Sunday, with a total of 15,299.

Florida’s Sunday caseload was more than any European country reported during the height of the outbreak there, Reuters reported.

“If Florida were a country, it would rank fourth in the world for the most new cases in a day behind the United States, Brazil and India,” Reuters wrote.

It also reported more new cases than did New York when it was the epicenter of the U.S. outbreak. Sources are divided on the previous U.S. record. The Associated Press reported that California held the previous record with 11,694 new cases on Wednesday, while before the record went to New York with 11,571 on April 15. Reuters, meanwhile, gave the previous record to New York with 12,847 new cases on April 10; The New York Times also reported it was held by New York, but with 12,274 new cases April 4. But in any case, the record is an alarming milestone for the Sunshine State with real consequences for its hospitals.

“It has just been horrifically busy,” University of South Florida infectious disease professor John Toney told The New York Times. “It’s reminiscent of what everyone dealt with in New York. It’s certainly putting a strain on a lot of the systems, even though hospitals are trying to accommodate.”

Florida’s record comes amidst a surge in cases nationwide and globally. Almost 40 states are seeing cases increase, and the U.S. broke world records by reporting around 60,000 new cases a day for the last four days, Reuters reported. Meanwhile, the World Health Organization reported a record of more than 230,000 new cases total Sunday, according to a New York Times update. The previous global record was set Friday, with more than 228,000 new cases.

Public health experts have attributed Florida’s growing caseload to people gathering in crowds and moving around once the state began reopening.

“Bottom line is, more people are mobile and they’re not necessarily taking the precautions we think would help,” Dr. Marissa Levine, a professor at the University of South Florida College of Public Health, told The New York Times.

University of Florida epidemiologist Dr. Cindy Prins also attributed the spread to people gathering in crowds, gyms and some restaurants, as well as reports of illegal raves and clubs in South Florida.

“I really do think we could control this, and it’s the human element that is so critical. It should be an effort of our country. We should be pulling together when we’re in a crisis, and we’re definitely not doing it,” she told The Associated Press. “I know people want to live their lives. There have been a lot of other times, people have made those sacrifices in order to benefit our society. It’s almost like a war effort. That’s what we need right now.”

Instead, the state is largely persisting with reopening efforts, which began in early May, according to NPR. Two of Disney World’s parks reopened Saturday, and the other two are scheduled to reopen Wednesday. Schools have also been ordered to reopen for in-person classes in August.

“We know there are huge, huge costs for not providing the availability of in-person schooling,” Florida Gov. Ron DeSantis said, according to The Associated Press. “The risk of corona, fortunately, for students is incredibly low.”

The outbreak in Florida is in some ways easier to manage than the outbreak in New York in April, The New York Times pointed out. Some of the increase in caseload is down to increased testing, and hospitals are better supplied and prepared to treat the disease. The state’s death rate is also well below New York’s at the outbreak’s peak there.

However, daily death totals began rising in the state last week, The Associated Press reported. Health experts predicted this would be the case, since death rates tend to lag behind infection rates by two to four weeks. Florida reported 514 fatalities for this week, an average of 73 per day. It averaged 30 per day three weeks ago.

The U.S. as a whole reported a seven-day death average of 700 Saturday, up from 471 July 5, but still below the more than 2,200 daily deaths it averaged in mid-April, according to The New York Times.

Overall, the new coronavirus has sickened 269,811 people in Florida and killed 4,242, the state health department reported.