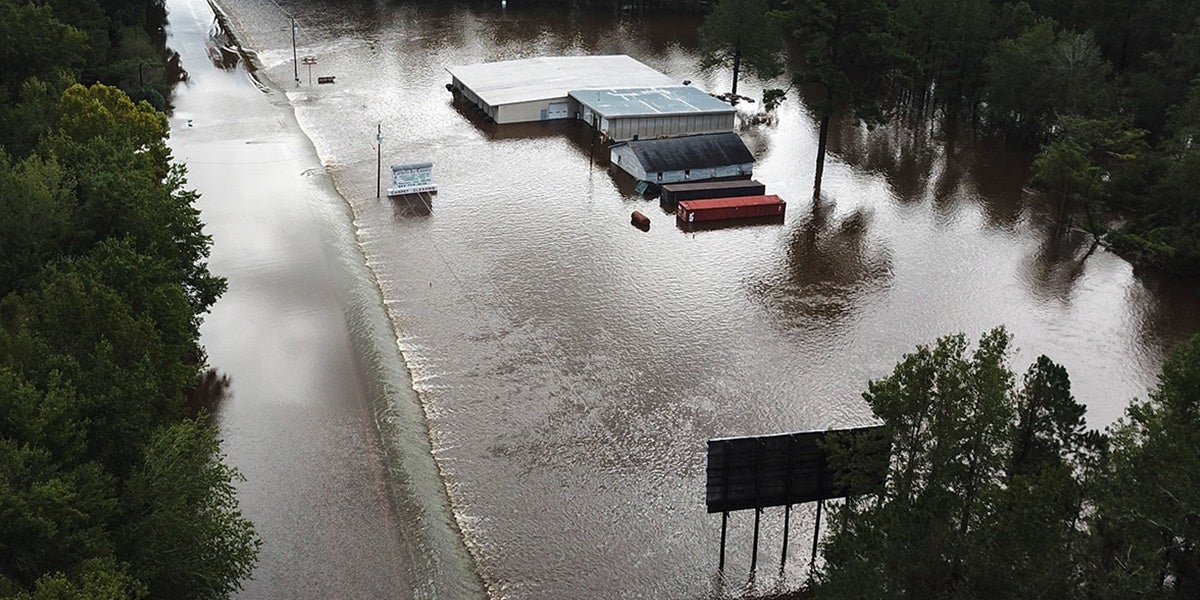 Women in a sheriff's van died in flooding like this from the Little Pee Dee River. Ricky Carioti / The Washington Post via Getty Images

Two female mental health patients died in flooding caused by Hurricane Florence when a sheriff’s department van transporting them from one South Carolina facility to another was swept away Tuesday night, The Associated Press reported.

Horry County Sheriff’s Department (HCSD) spokeswoman Brooke Holden told The Associated Press that two deputies and the two detained women were traveling in the van. The deputies tried to get the women out, but were unable to do so. Rescuers were able to extract the deputies from the top of the van.

“The two deputies attempted to extricate the persons being transported,” an HCSD press release reported by CNN said. “Despite persistent and ongoing efforts, floodwater rose rapidly and the deputies were unable to open the doors to reach the individuals inside the van.”

Horry County Sheriff Phillip Thompson said in a press release that his office would cooperate with an investigation into what happened.

“Tonight’s incident is a tragedy,” he said, The Associated Press reported. “Just like you, we have questions we want answered.”

The investigation will be handled by the South Carolina Law Enforcement Division.

They were being transported from a hospital in Loris and the Waccamaw Center for Mental Health in Conway, near the South Carolina coast, to McLeod Health Darlington, 65 miles northwest, Chief Deputy Tom Fox said.

The vehicle encountered flood waters about half a mile from the Little Pee Dee River, which has a flood level of 9 feet and is currently at 14 feet and expected to rise to 15.6 feet by Thursday night.

A police scanner recorded audio footage of the rescue attempt.

“The officers report they got out. The van is submerged, and they cannot get their inmates out,” one unidentified person said, according to CNN.

Fox told CNN the women were restrained with seat belts.

The tragic incident happened after South Carolina faced criticism, in the lead-up to Florence, for declining to evacuate prisoners from facilities in the evacuation zone.

Specifically, it decided against evacuating at least 650 inmates from MacDougall Correctional Facility, which was in a county, Berkeley, that was covered by an evacuation order, VICE News reported.

North Carolina and Virginia evacuated some facilities ahead of the storm, but South Carolina has not evacuated a prison in advance of a hurricane since 1999.

“Previously, it’s been safer to stay in place with the inmates rather than move to another location,” South Carolina Department of Corrections spokesperson Dexter Lee told VICE News.

New Yorker reporter Daniel A. Gross tweeted conversations with South Carolina prisoners before and after the storm.

As of Sept. 16, South Carolina prison system director Bryan Stirling said there had been “[n]o damage at all to the prisons,” Gross tweeted.

An inmate he spoke to said the storm had not been as bad as he feared, but he still strongly disagreed with the decision not to evacuate.

“Hell yea we disagree! What if the storm would have been as bad as predicted?” he said.

18 Dead, More Than 900 Rescued as #Florence Floods the #Carolinashttps://t.co/0EpiVhZM6e