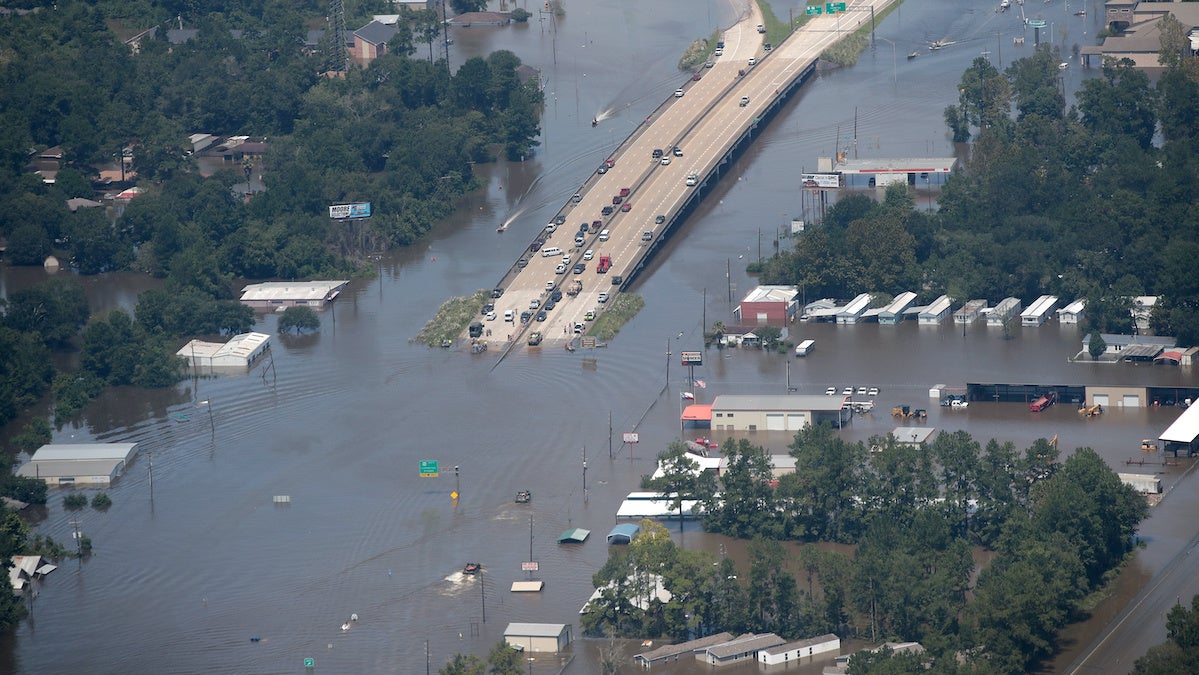 A road is covered by floodwater left in the wake of Hurricane and Tropical Storm Harvey on Aug. 31, 2017 near Houston, Texas. Scott Olson / Getty Images

That threat is the takeaway in a comprehensive new analysis by the First Street Foundation, a nonprofit research and technology group that experts say has put together the most complete assessment of the nation’s mounting vulnerability to flooding, as CNN reported.

The in-depth and extensive report released Monday shows that across the U.S., there are at least 6 million homes that have a one percent chance of flooding each year, which puts them within a “100-year” flood zone. Yet, as Hurricane Harvey revealed in 2017 when it flooded Houston, downpours are flooding homes outside areas the government considers 100-year flood zones, according to The Washington Post.

The new analysis shows that nearly 70 percent more homes are at substantial risk of flooding than are currently within FEMA’s Special Flood Hazard Areas, which determines eligibility for the National Flood Insurance Program, as The Washington Post reported.

Across the country, about 8.7 million properties are located in Special Flood Hazard Areas as determined by FEMA’s flood maps, the legal standard used in the U.S. to manage floodplains and determine insurance requirements and price policy premiums. First Street’s data says the true number is closer to 14.6 million properties. The group says the gap between FEMA’s maps and this new data means that some 6 million property owners could be unaware of their current flood risk, according to CNN.

First Street’s work shows just how dramatically Americans’ exposure to flood hazards will increase during the next 30 years, which is the term of a typical mortgage.

The model finds that about 14.6 million properties now have a substantial level of risk now, but that grows to 16.2 million by 2050, with the caveat that there are considerable uncertainties involving changing precipitation patterns that could inflate that number further, according to The Washington Post.

“If you’re a homeowner, renter or buyer in this country and you want to understand flood risk, the only data that’s available to you are the FEMA flood maps,” said Matthew Eby, First Street’s founder and executive director, as CNN reported. “And the FEMA flood maps are made to determine flood insurance rates — not necessarily to determine what your personal flood risk is.”

First Street created a website that allows users to plug in their own address to see their flood risk.

In more than two-thirds of states, First Street found that areas with more racial minority residents also had a greater share of unmapped flood risk than the statewide average. Jeremy Porter, First Street’s director of research and development, told The New York Times that cities seem to invest more in flood protection in areas with higher incomes and property values.

In Florida, 23 percent of all homes face flood risk, while in New Orleans, the number is at 98 percent. In Virginia Beach the flood risk increased over 80 percent in the last 30 years, according to First Street’s FloodFactor website.

The information will give local governments and property owners a leap forward in understanding their evolving risks from climate change and other hazards, said Kerry Emanuel, a meteorology professor at the Massachusetts Institute of Technology, to USA Today.

Emmanuel said the new data takes pieces of information from many experts and puts it together in a way that hasn’t been done before to give property owners “the risk of their home being blown down or flooded by salt or freshwater,” Emanuel said to USA Today.

“They’re going to watch the value of their property plummet over time,” he said. “That might make them think twice,” he said, adding that it might also convince them to ask their elected representatives “to do something about it.”