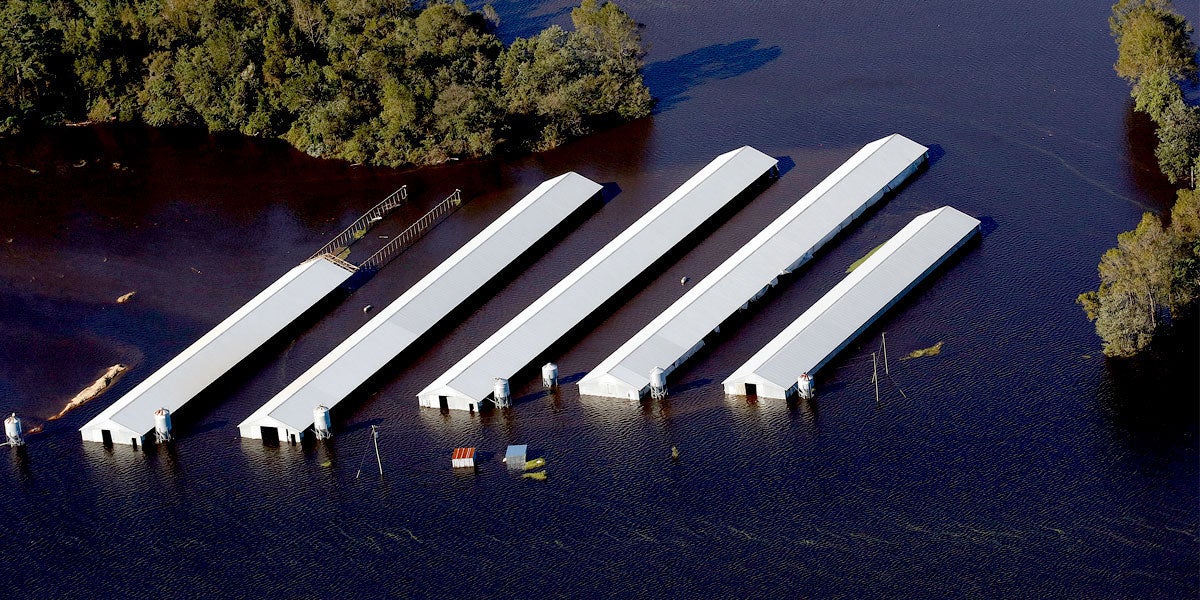 Flooding across North Carolina continues in the aftermath of Hurricane Matthew and Gov. McCrory said some rivers are still rising. McCrory also warned that conditions in central and eastern parts of the state remain “extremely dangerous.”

After surveying the damage, environmentalists are expressing concerns after they found flooding at factory farms and coal ash sites fearing toxins could spread through miles of waterways.

The Washington Post reports “at least tens of thousands of chickens, hogs and other livestock are feared dead in floodwaters that washed over factory farms and towns in eastern North Carolina following the storm.” 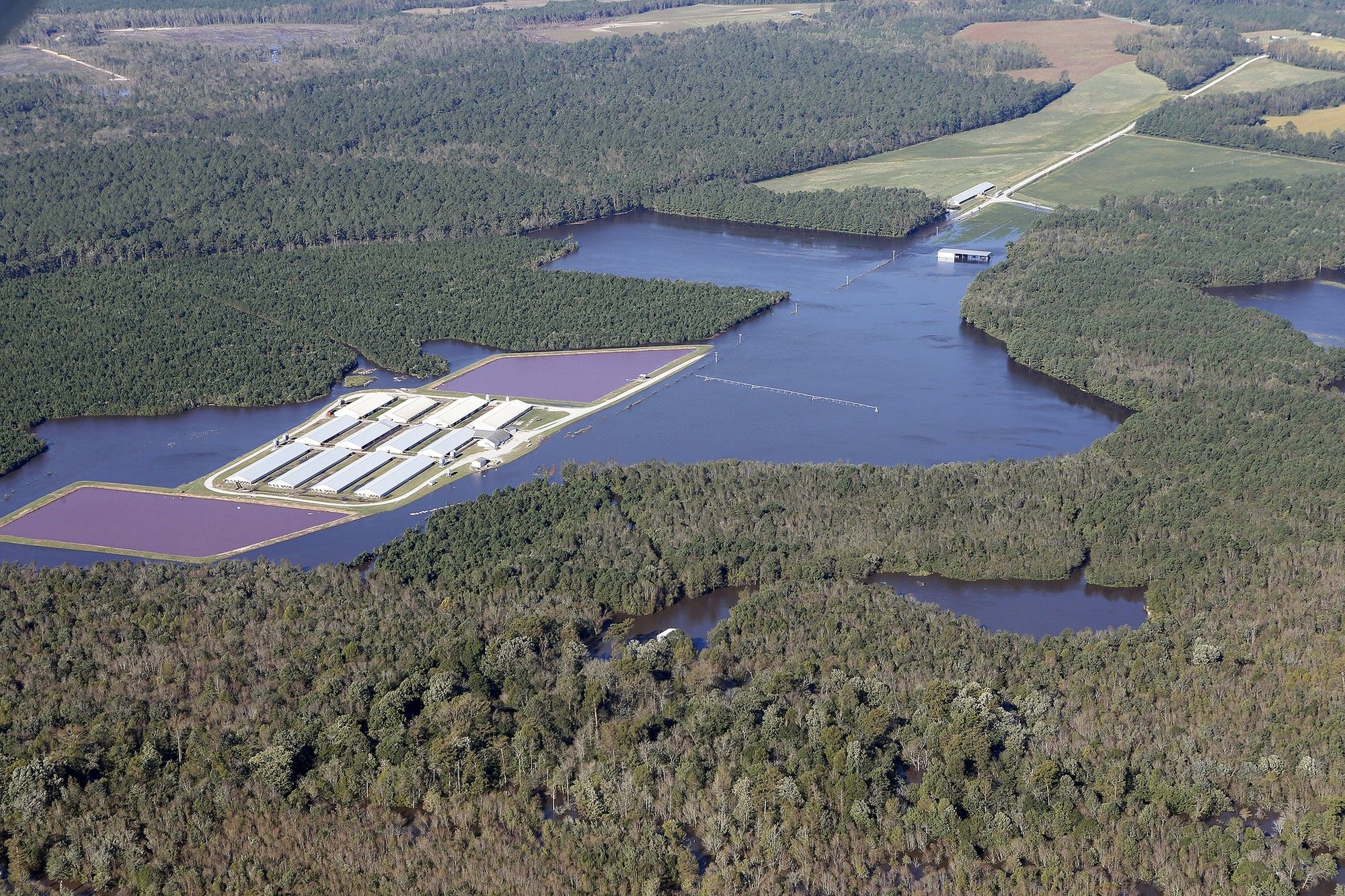 According to Donna Lisenby of Waterkeeper Alliance, who is documenting the record-setting environmental impacts in the wake of Hurricane Matthew, “There are tens of thousands of dead animals who remained locked in buildings while operators ignored dire flood warnings and left them to die.” 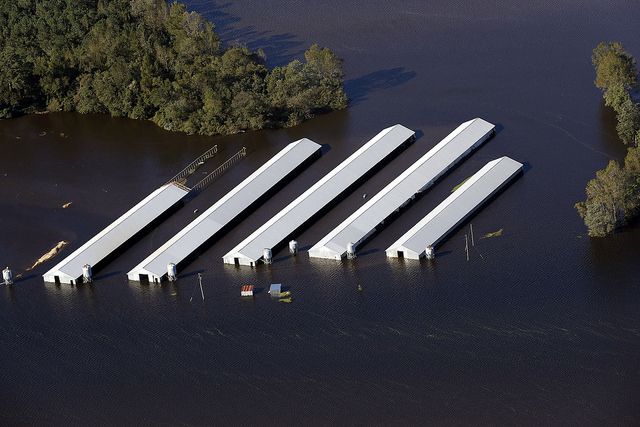 In a briefing Tuesday morning, McCrory said “a lot of poultry and animals—a lot, thousands” already had drowned, the Washington Post reported.

Following a helicopter tour late Tuesday afternoon, Rick Dove of Waterkeeper Alliance told The Washington Post he estimated the number of dead chickens “is probably in the millions” and that he saw thousands of floating carcasses.

In addition to concerns over the potential devastating impacts flooded factory farms could have on the environment and public health, Waterkeeper Alliance is worried that rising water at the Neuse and Cape Fear rivers will continue to breach the coal ash pond dams at the state’s power plants and spread toxins throughout the region. These two rivers have the highest concentration of massive industrial sites with waste ponds larger than football stadiums. 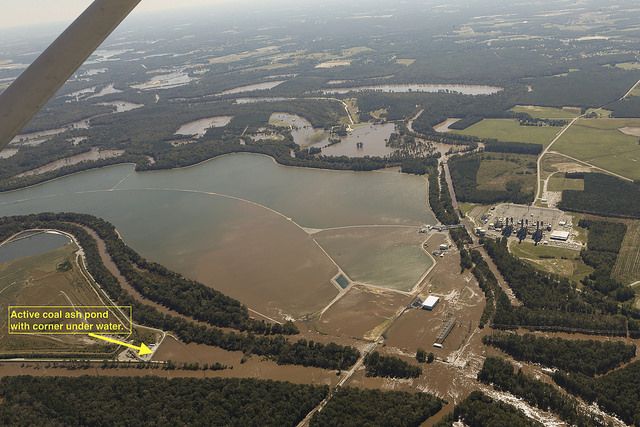 Waterkeeper Alliance staff attorney Pete Harrison and Upper Neuse Riverkeeper Matt Starr posted a video Tuesday of their inspection of the rising floodwaters. They found that the flooded waters already reached two Duke Energy coal ash ponds and were impinging on a third.

“As flood waters continue to rise in some areas of North Carolina we expect this disaster to continue for several more days and may get worse,” Lisenby said. “We have 11 members of our rapid response team in the air and on the water and will continue provide information.”

Rachel Maddow reported on these issues on her MSNBC show, The Rachel Maddow Show, Tuesday. Duke Energy told Maddow they are continuing to inspect the dams at their active coal ash ponds and that they don’t see flooding as an imminent threat.

Waterkeeper Alliance and the Riverkeeper organizations said they will continue to keep a close eye on this issue.