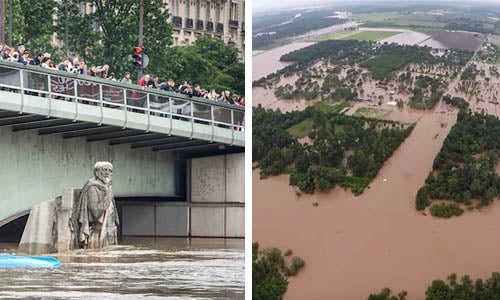 Texas and France have a number of things in common. They’re roughly the same size. They were both republics. They have delectable, widely loved cuisines. And, just last week, both were battered by torrential rains and flooding turbocharged by human-made global warming.

What’s different between them? Plenty, to be sure, but given that the recent deluge is the topic du jour, what’s most interesting are the diametrically opposite views French and Lone Star state officials hold about the climate change connection. For the French, it’s “Mais oui, bien sûr!” But as far as the Texans are concerned, “It just ain’t happenin’.”

But before diving into that, let’s survey the damage. 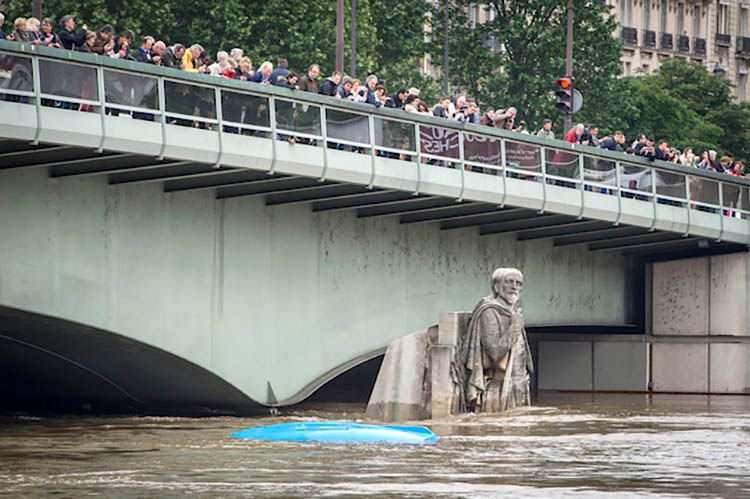 Paris, France, was particularly hard-hit. The Seine crested at 20 feet above its usual levels last Saturday, more than 19,000 metro area homes lost electric power and 20,000 people in Nemours and other towns had to temporarily evacuate their homes. May was the country’s rainiest month since 1886, according to Radio France International and as of last Saturday, the flood-related death toll stood at four.

Paris, Texas, was largely spared. But in the southeastern section of the state, floods killed at least 17 and dozens more are missing. The Brazos River, which cuts diagonally across the state, reached a record flood level of 54 feet near Richmond, 30 miles southwest of Houston and some 1,000 people had to be evacuated from their homes in Fort Bend County. Meanwhile, more than 130 roads were either flooded or closed and the governor declared 46 counties disaster areas.

Earlier this year, the National Academy of Sciences published a study that definitively verified that human-caused climate change is exacerbating heat waves, droughts and heavy precipitation, but Texas and France are already painfully aware of the consequences. The catastrophic flooding they just experienced is not the first time they have been slammed by punishing, climate change-related weather.

Texas is getting pummeled by a double-whammy: extreme precipitation and drought, depending on the Pacific Ocean’s natural cycles that can either produce hot and dry (La Niña) or wet and cool (El Niño) conditions. Climate change intensifies the weather events they spawn.

Last year, for example, more than 35 trillion gallons of water fell on Texas in May, enough to flood the state’s entire 268,820 square miles with 8 inches of water. A study published last October in the journal Geophysical Research Letters concluded that “anthropogenic [human-caused] global warming contributed to the physical processes that caused the persistent precipitation in May 2015.”

Back in 2011, meanwhile, Texas suffered the costliest drought in its history. Texas A&M University calculated that farmers and ranchers lost $7.82 billion. The likely culprit? Climate change. A July 2012 study in the Bulletin of the American Meteorological Society compared the dry La Niña year of 2008 with La Niña years in the 1960s and determined that climate change has made extreme hot and dry conditions in Texas in La Niña years 20 times more likely today than 50 years ago.

As for France, a deadly heat wave centered in that country in August 2003 killed more than 70,000 people across the continent. It was the hottest European summer on record since at least the year 1500 and apparently a harbinger of things to come. A December 2014 study in the journal Nature Climate Change concluded that Europe is now 10 times more likely to experience a similarly extreme heat wave than it was a decade ago because of human-made global warming.

France also will likely have to cope with more floods. A March 2014 study in Nature Climate Change projects that by mid-century the frequency of flooding across Europe could double and the annual average losses could jump fivefold. The study attributed two-thirds of those financial losses to development in flood-prone areas and the remaining third to climate change.

How did elected officials in France and Texas react to what amounts to just the latest in a steady parade of climate change-related, extreme weather disasters?

French President François Hollande unambiguously linked the rains and flooding to global warming. “When there are climatic phenomena of this seriousness,” he said, “we must all be aware that we must act globally.” Hollande’s perspective is representative of the view held by virtually all elected officials in France, regardless of party affiliation.

Texas Gov. Greg Abbott, meanwhile, was forced to declare a state of disaster in four dozen Texas counties or, as he put it, “literally from the Red River to the Rio Grande,” but made no mention of the role climate change likely played.

That’s not a surprise: Abbott is a climate science denier. He maintains it is an open question whether human activity is influencing the climate. “We must be good guardians of our Earth,” he told the San Antonio Express-News in 2014, “but we must base our decisions on peer-reviewed scientific inquiry, free from political demagogues using climate change as an excuse to remake the American economy.”

Never mind that peer-reviewed science is unequivocal about the threat carbon emissions pose to the climate.

What about U.S. Rep. Lamar Smith, who represents a Texas congressional district that includes San Antonio and Austin? Both cities just experienced intense rain and severe flooding and Smith is the chairman of the House Space, Science and Technology Committee. Surely the head of a science committee must be aware of the link between global warming and extreme weather.

Nope. Like Abbott, Smith is a confirmed climate science denier. Although he rejected that characterization during a meeting with constituents last November, claiming that he’s merely a “semi-skeptic,” he went on to dispute mainstream climate science.

“I think the human component may actually be a small fraction of the contributing forces on climate change,” Smith told the gathering. He then erroneously claimed “natural causes” and changes in the tilt of the Earth’s axis over time play a more significant role.

Likewise, Smith dismisses the climate change-severe weather connection. “Administration officials and the national media regularly use the impacts from hurricanes, tornadoes, droughts and floods to justify the need for costly climate change regulations,” he said in a December 2013 press release. “The fact is there is little evidence that climate change causes extreme weather events.”

Smith not only subscribes to specious theories about climate change, he also harasses climate scientists in the federal government and at nonprofit organizations with whom he disagrees. Last fall, for example, he subpoenaed the National Oceanic and Atmospheric Administration for its internal emails and research data because he believes the agency’s scientists are using “skewed” data. And just last month, he requested internal documents and emails from my organization, the Union of Concerned Scientists, because we have been openly encouraging state attorneys general to investigate ExxonMobil for failing to disclose to investors and the public what its scientists knew about climate change.

What could explain this stark divide between French and Texan politicians? There may be a number of reasons, but an obvious one to consider is the role of undue corporate influence. In France, corporations are not allowed to donate money or provide services to political candidates or political parties. In Texas, it’s a very different story.

Abbott, a former Texas attorney general, won the governorship in 2014. The $4.2 million he received in contributions from the oil and gas industry for his gubernatorial campaign was more than twice the amount he got from any other sector. Among his top benefactors were Nustar Energy ($90,000), Koch Industries ($57,500) and Valero Energy ($50,000). Other donors included ExxonMobil, which kicked in $15,000 and Chevron and ConocoPhillips, which each donated $12,500.

The oil and gas industry, meanwhile, has been Smith’s leading patron during his nearly 30 years in office. Over the last decade, his biggest contributors from that sector include Koch Industries, which gave him $87,000 and Valero Energy, which gave him more than $100,000.

So how well do French and Texan politicians reflect public opinion in their respective locales?

According to a November 2015 Pew Research Center survey, 56 percent of the French people consider climate change to be a “very serious problem” and 86 percent endorse an international agreement limiting carbon emissions. Presumably most French citizens supported President Hollande when he declared at the U.N. climate conference in Paris last December that the world “is entering the low-carbon era” and that “France will do everything it can not only to enforce the [international] agreement—that is our responsibility—but to accelerate the movement” to dramatically cut carbon emissions.

On the other hand, Abbott, Smith and the other climate science deniers in the Texas statehouse and congressional delegation are letting their constituents down. A September 2013 survey conducted by the Yale Project on Climate Change Communication found that 70 percent of Texans accept the fact that global warming is happening and more than 50 percent want local, state and federal officials to do more to address it.

So what is to be done?

There’s an old Texas saying that points to the fact that special interest money rules today’s politics—at least in the U.S. It goes like this: “You got to dance with them that brung you.” Given the likelihood Texans are in for a lot more drought and flooding, it’s about time they interrupted that two-step and cut in.