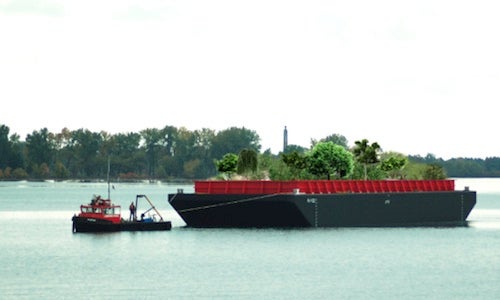 Swale, a floating garden of edible plants, is about to embark on New York City’s Hudson River this June.

The vessel consists of a 80-by-30-foot platform that sits atop recycled shipping containers. The garden will feature fruit trees and other plants such as scallions, rosemary, blueberries, wild leek, radicchio, ramps, sea kale and more, according to Curbed. Visitors will be able to pluck and keep their produce for free. 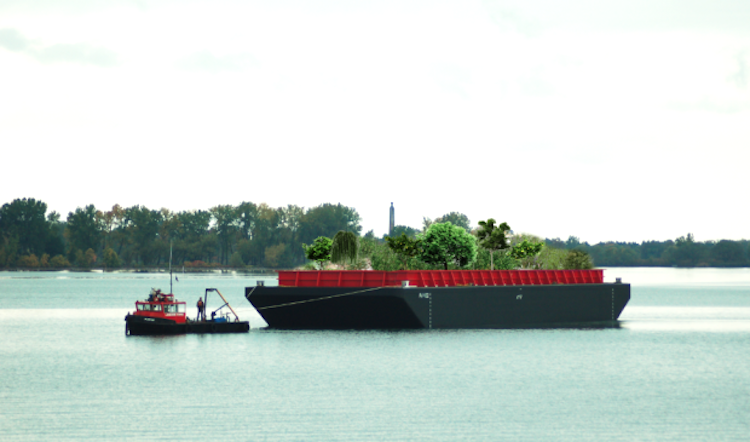 The Swale will dock at Brooklyn Bridge Park, Governors Island and the Bronx, Brooklyn Based reported.

Not only is it a floating urban farm, a pavilion erected on the structure will also serve as home-base for Eco_Hack 2016, “a large-scale eco/social/digital installation and performance series.” The free, month-long gathering will consist of performances, gallery shows and activist meetings, and is open to the public.

The Swale was developed by artist Mary Mattingly and a number of collaborators including the artists’ collective Biome Arts.

“Think more garden than forest,” Sally Bozzuto, a member of Biome Arts told Brokelyn. “Swale will not look exactly like a forest of tall trees but rather more like a garden with some small trees including alder, lime and Asian persimmon. All [the plants] are edible, including the small trees, bushes and shrubs such as gooseberry and huckleberry, and smaller plants like asparagus, cherry tomatoes, yams and greens.”

Local gardeners and students from New York City schools such as Stuyvesant High School, Dwight-Englewood and Fairfield University helped create a base layer of wetland plants that filters water from the river to nourish the plants, the Observer reported.

The idea behind the floating garden was to encourage public interaction with the waterways, Hyperallergic reported.

“It’s important for this project to function in public space,” Mattingly told the publication. “Public space in New York is very limited, so in this case we are working towards creating more access to a public space that has limited accessibility.”

Mattingly explained to Brooklyn Based that the appeal of food forests is that they require less care in the long term compared to traditional farming and gardening.

“They don’t have to be replanted each year, and once they are more established, they take care of themselves to a large extent,” Mattingly said.

According to Brooklyn Based, the project will cost about $50,000 by the time it is completed. Swale has secured funding from A Blade of Grass, an organization that provides resources to artists working on projects related to social change. An Indiegogo campaign has also been launched with the goal of raising $20,000 to execute Eco_Hack.

Learn more about the project and Eco_Hack 2016 in this video”