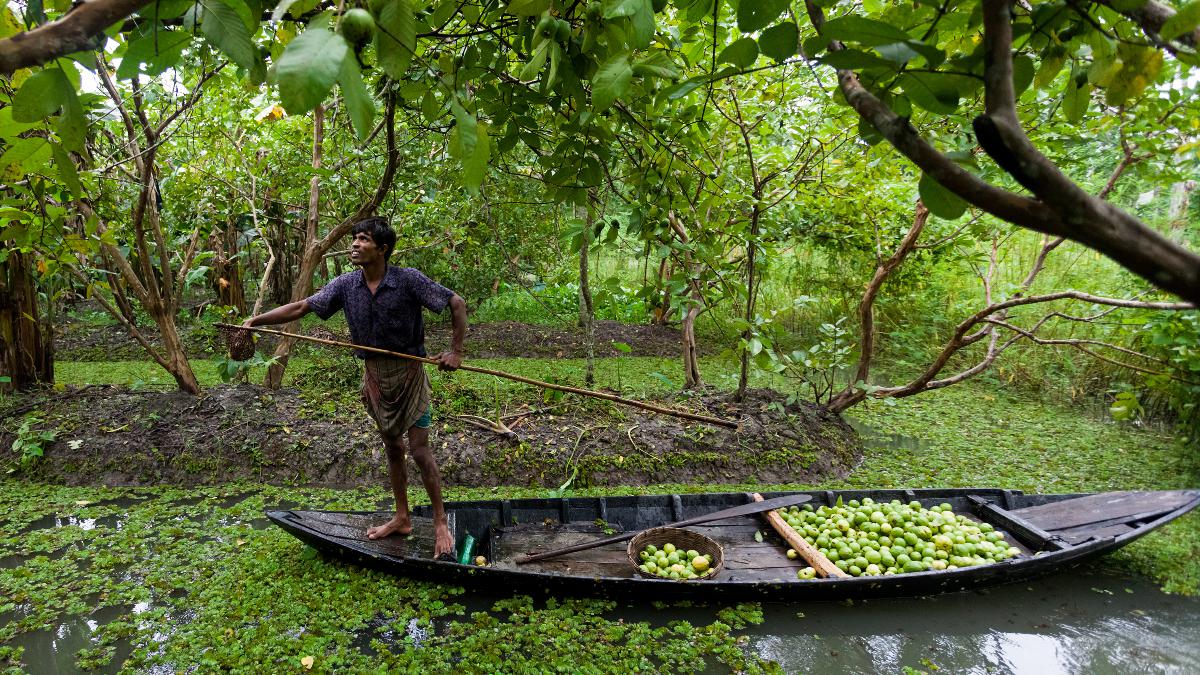 A farmer collects guava from his garden to sell in a local market in Pirojpur, Bangladesh. NurPhoto / NurPhoto via Getty Images

In flood-prone regions of Bangladesh, farmers and their families utilize a centuries-old tradition to reduce their vulnerability to climate change.

Floating gardens — known as dhap, or locally as baira — have been used in south-central Bangladesh for 300-400 years, BBC reported. Farmers build their own floating gardens out of plants, and like rafts, the gardens fall in and out with the moving water, according to Ohio State News.

In a study published recently in the Journal of Agriculture, Food and Environment, researchers interviewed families who use this farming method to determine how the gardens could provide food and income security, despite the impacts of a changing climate, like heavier rainfall and stronger cyclones, Ohio State News reported.

“We are focused here on adaptive change for people who are victims of climate change, but who did not cause climate change,” Craig Jenkins, a co-author of the study and academy professor emeritus of sociology at The Ohio State University, told Ohio State News. “There’s no ambiguity about it: Bangladesh didn’t cause the carbon problem, and yet it is already experiencing the effects of climate change.”

Two-thirds of Bangladesh is wetland and large parts of the land can be underwater for up to eight months a year, BBC reported. The country also suffers from poverty, where 48 percent of its population is landless. As climate change grows more severe, bringing stronger tropical storms to the region, it is estimated that one in seven people will be displaced by 2050, the Environmental Justice Foundation found, BBC reported.

But despite these challenges, farmers have implemented this sustainable, low-cost option as a means to survive. In their study, researchers suggest these floating gardens can provide both food security and income for rural households, Ohio State News reported.

“It is very environmentally friendly – all the necessary inputs and resources are natural, and it does not create any waste or byproduct which can impact the environment negatively,” Fahmida Akter, a senior research fellow at the James P Grant School of Public Health at Brac University in Dhaka, told BBC about the floating gardens, which rely on water hyacinth, an aquatic plant, for support. Once farmers layer these aquatic plants about three feet deep to mimic a raised-garden bed, they then plant vegetables, such as okra, some gourds, spinach and eggplant, according to Ohio State News.

The practice also contributes to local economies, giving middlemen a chance to buy and sell seedlings, villagers a chance to earn wages from building the beds and creates an income strategy for households, the researchers wrote.

“In Bangladesh, a lot of small farmers that had typically relied on rice crops are moving away from those because of the effects of climate change and better returns from alternative crops,” Jenkins added. One floating garden farmer told the researchers that he now earns four times the amount he did at the rice paddies, Ohio State News reported.

Floating gardens are not exclusive to Bangladesh. In southern Mexico, for example, farmers in the city of Xochimilco are reviving a similar practice that was first built by the Aztecs to meet food demand — a struggle ever since the beginning of the COVID-19 pandemic. “Now the virus is revealing the strength of this model in the midst of a crisis,” Atlas Obscura reported.

While the gardens provide a reliable source of food for farmers impacted by both the climate and covid crises, the floating gardens are still in need of improvement. According to Pravash Mandal, a farmer in the Barisal district of Bangladesh, the gardens cannot withstand waves or heavy currents, BBC reported.

Researchers call on NGOs and the government to provide support to help farmers develop floating gardens efficiently, noting their ability to create a “sustainable and lucrative income strategy for rural households,” in increasingly vulnerable, flood-prone communities in Bangladesh.