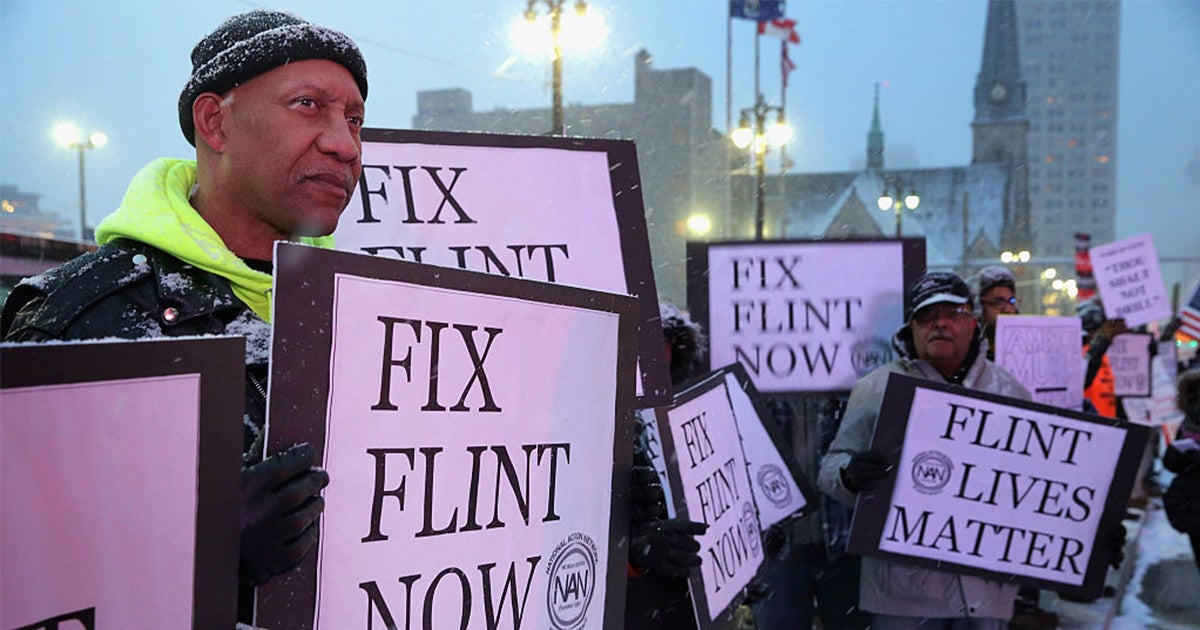 Demonstrators outside a Republican presidential debate in Detroit in 2016. Chip Somodevilla / Getty Images

Michigan prosecutors dropped all criminal charges against government officials involved in the Flint water crisis Thursday, citing concerns about the investigation they had inherited from the Office of Special Counsel (OSC) appointed by former Attorney General Bill Schuette, CNN reported.

“We cannot provide the citizens of Flint the investigation they rightly deserve by continuing to build on a flawed foundation,” Solicitor General Fadwa Hammoud and Wayne County Prosecutor Kym L. Worthy said in a statement. “Dismissing these cases allows us to move forward according to the non-negotiable requirements of a thorough, methodical and ethical investigation.”

The news comes a little more than three years after the first criminal charges were filed and a little more than five years since an emergency manager switched Flint’s water supply from the Detroit water system to the Flint River as a cost-saving measure. The highly corrosive water leached lead from the pipes, contaminating the drinking water with unsafe levels of the heavy metal. The new water was also linked to an outbreak of Legionnaires’ disease that killed at least 12, The New York Times reported.

“This is not justice,” Mays told The New York Times. “It just seems like a political ploy. The only thing it tells me is our lives don’t matter.”

But the prosecutors, who took over the case after the Michigan attorney general’s office passed from Republican to Democratic control earlier this year, argued in their statement that there had been major problems with the original investigation:

Legitimate criminal prosecutions require complete investigations. Upon assuming responsibility of this case, our team of career prosecutors and investigators had immediate and grave concerns about the investigative approach and legal theories embraced by the OSC, particularly regarding the pursuit of evidence. After a complete evaluation, our concerns were validated. Contrary to accepted standards of criminal investigation and prosecution, all the available evidence was not pursued. Instead, the OSC entered into agreements that gave private law firms — representing Michigan Department of Health and Human Services, Michigan Department of Environmental Quality, the Department of Treasury, and the Executive Office of former Governor Rick Snyder — a role in deciding what information would be turned over to law enforcement.

Hammoud and Worthy said they had already uncovered new information and pinpointed additional people who might be charged. They also said dropping the charges did not prevent them from filing new charges against the original defendants. The pair said they would not answer media inquiries until they spoke directly to Flint residents at a community meeting scheduled for June 28.

“I want to remind the people of Flint that justice delayed is not always justice denied and a fearless and dedicated team of career prosecutors and investigators are hard at work to ensure those who harmed you are held accountable,” she said in a statement.

“It is frustrating, but I’d rather be frustrated at this end and know that they’re going to do a deep dive into what happened,” Weaver told The New York Times. “I think this way, they may have the evidence they need to be able to hold them accountable and throw away the key.”

Schuette, meanwhile, took to Twitter to defend his team’s investigation. He noted that the OSC had brought 59 charges against 15 people and won five convictions.

“We had an experienced, aggressive and hard-driving team. Everything we did was for the people of Flint,” he wrote.

The news means that Michigan Department of Health and Human Services Director Nick Lyon and former Chief Medical Executive Eden Wells will no longer face trial for charges including involuntary manslaughter after they allegedly failed to warn residents of the Legionnaires’ outbreak in a timely manner, The Detroit News reported. Lyon was the highest-ranking official to be charged in the initial investigation. Charges against six other officials were also dropped Thursday. Seven of the original 15 charged had previously agreed to plea deals.

Chip Chamberlain, one of Lyon’s attorneys, told The Detroit News that his client “feels fantastic and grateful and vindicated.”

However, Lyon and the others could face new charges.

“If charges are dismissed, usually prosecutors have six months or so to refile charges and it won’t affect the statute of limitations,” Wayne State University law professor and former federal prosecutor Peter Henning told The Detroit News.