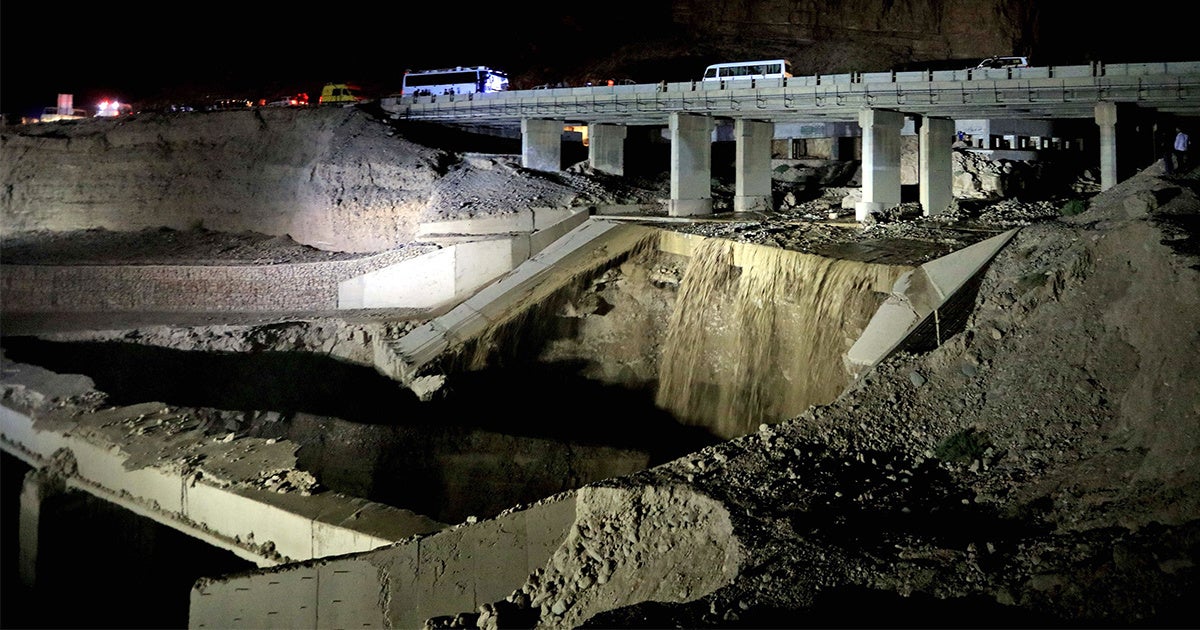 The site of an accident near Jordan's Dead Sea where flash flooding washed away a school bus. KHALIL MAZRAAWI / AFP / Getty Images

At least 20 people, mostly children, have died in a flash flooding in the Dead Sea area of Jordan following heavy rains on Thursday, Arab News reported.

Most of the deaths occurred when a school bus carrying 37 students and seven staff members was washed off the road on its way to the Zara Maeen hot springs area, BBC News reported.

“The children tried to escape the floods by going to the bus but its doors were closed,” the father of one of the survivors, Abu Yousef, told reporters, Reuters said. “The teachers tried to save the children but the flood’s intensity made it impossible.”

One video shared by Arab News showed the force of the flood waters sweeping through the valley.

Most of the victims were under 14 and also included families vacationing in the popular resort area. Rescuers and hospital workers told Reuters it was one of the worst natural disasters to impact Jordan in years.

So far, 37 people have been rescued, Arab News said, in an operation involving helicopters, divers and the army as rescuers searched the shores of the Dead Sea, which is the lowest point on earth. Israel assisted in the search efforts with helicopters and search-and-rescue teams.

One video showing what was reportedly the rescue of a child went viral on social media.

#VIDEO: A clip reportedly showing the dramatic rescue of a child during the #JordanFloods on Thursday has gone viral on social media. #Jordan

The Jordanian government said it would open an investigation into the incident, but that the school, Victoria College in Amman, had broken regulations by embarking on the trip despite the bad weather.

“It is clear that there is a violation; the school that organized the trip did not abide by public safety regulations which stipulate that students must not swim and must be kept away from waterways,” Minister of State for Media Affairs Jumana Ghunaimat told Arab News.

The school had approval for a different destination in the Easter desert region of Jordan, Ghunaimat said.

“Everyone who is proved to have committed a violation and did not do their part will be held to account,” she said.

Jordan’s King Abdullah II canceled a visit to Bahrain scheduled for Friday because of the tragedy. The Royal Hashemite Court flew Jordan’s flag at half-mast Friday to honor the victims.

The rains were the first to hit the area after the summer dry season, and also washed out a bridge on one of the Dead Sea cliffs.

Flash floods are common in the area when rain hits higher ground and causes torrents to pour down the valley’s steep cliffs, The Guardian reported. In April, similar floods killed nine Israeli teenagers hiking in the area.