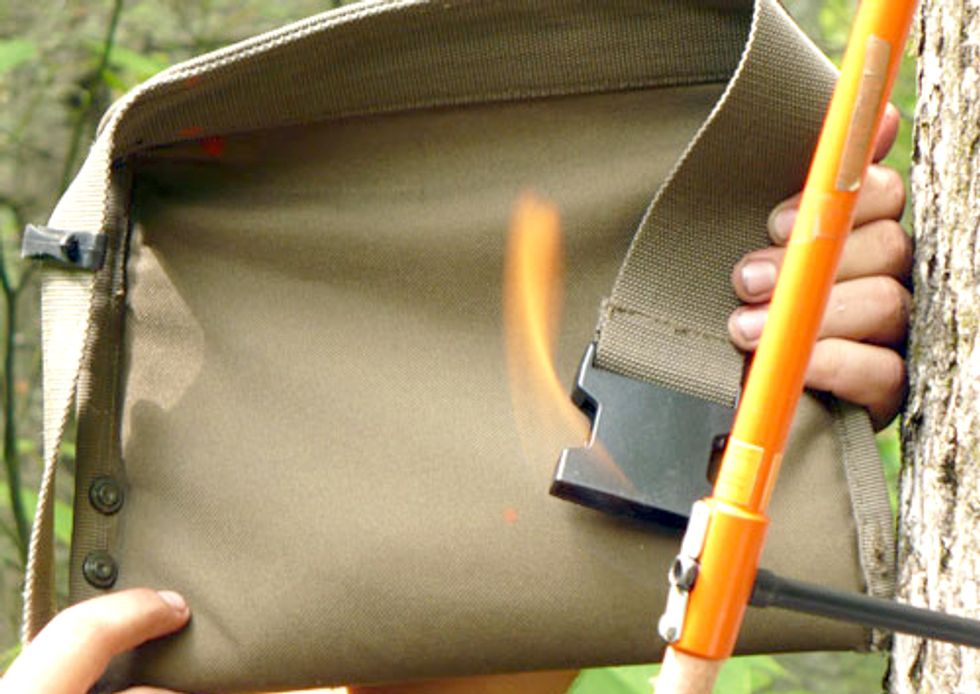 A flame fueled by methane shoots out of a cored oak tree. Photo by Yale School of Forestry & Environmental Studies.

Diseased trees in forests may be a significant new source of methane that causes climate change, according to researchers at the Yale School of Forestry & Environmental Studies in Geophysical Research Letters.

“These are flammable concentrations,” said Kristofer Covey, the study’s lead author and a PhD candidate at Yale. “Because the conditions thought to be driving this process are common throughout the world’s forests, we believe we have found a globally significant new source of this potent greenhouse gas.”

The estimated emission rate from an upland site at the Yale forest is roughly equivalent to burning 40 gallons of gasoline per hectare of forest per year. It also has a global warming potential equivalent to 18 percent of the carbon being sequestered by these forests, reducing their climate benefit of carbon sequestration by nearly one-fifth.

“If we extrapolate these findings to forests globally, the methane produced in trees represents 10 percent of global emissions,” said Xuhui Lee, a co-author of the study and Sara Shallenberger Brown professor of Meteorology at Yale. “We didn’t know this pathway existed.”

The trees producing methane are older—between 80 and 100 years old—and diseased. Although outwardly healthy, they are being hollowed out by a common fungal infection that slowly eats through the trunk, creating conditions favorable to methane-producing microorganisms called methanogens.

“No one until now has linked the idea that fungal rot of timber trees, a production problem in commercial forestry, might also present a problem for greenhouse gas and climate change mitigation,” said Mark Bradford, a co-author and assistant professor of Terrestrial Ecosystem Ecology at F&ES.

Red maple, an abundant species in North America, had the highest methane concentrations, but other common species, including oak, birch and pine were also producers of the gas. The rate of methane emissions was 3.1 times higher in the summer, suggesting that higher temperatures may lead to increasing levels of forest methane that, in turn, lead to ever-higher temperatures.

The other co-authors of the paper, Elevated Methane Concentrations in Trees of an Upland Forest, are Stephen Wood, a PhD student at Columbia University, and Robert Warren, former postdoctoral researcher at Yale and now an assistant professor at Buffalo State (SUNY).