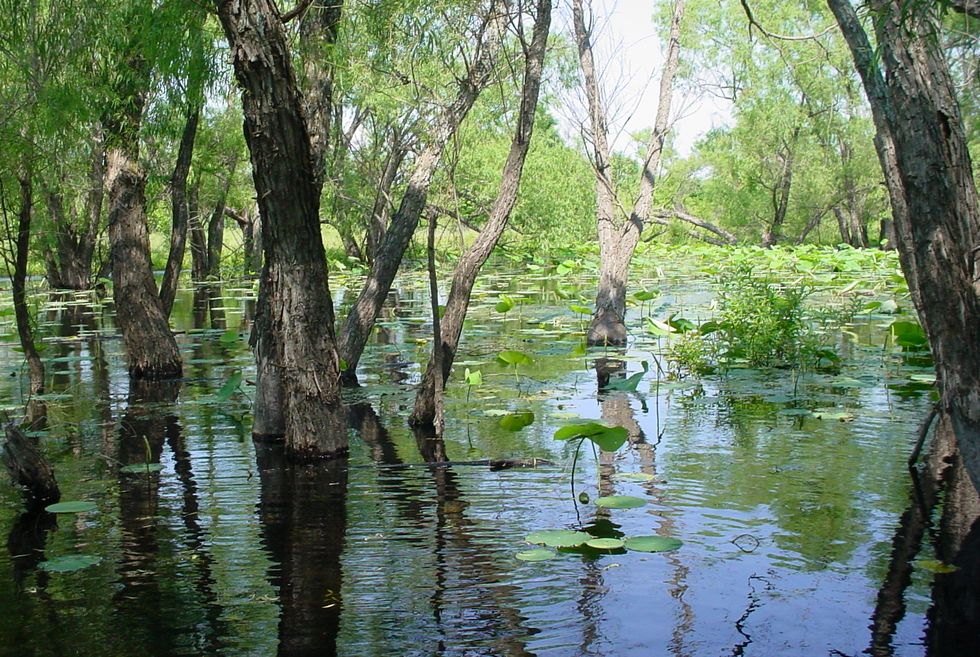 America’s wetlands declined slightly from 2004-2009, underscoring the need for continued conservation and restoration efforts, according to a report issued Oct. 6 by the Department of the Interior’s U.S. Fish and Wildlife Service. The findings are consistent with the service’s status and trends wetlands reports from previous decades that reflect a continuous but diminishing decline in wetlands habitat over time.

The report, which represents the most up-to-date, comprehensive assessment of wetland habitats in the U.S., documents substantial losses in forested wetlands and coastal wetlands that serve as storm buffers, absorb pollution that would otherwise find its way into the nation’s drinking water, and provide vital habitat for fish, wildlife and plants.

“Wetlands are at a tipping point,” said Secretary of the Interior Ken Salazar. “While we have made great strides in conserving and restoring wetlands since the 1950s when we were losing an area equal to half the size of Rhode Island each year, we remain on a downward trend that is alarming. This report, and the threats to places like the Mississippi River Delta, should serve as a call to action to renew our focus on conservation and restoration efforts hand in hand with states, tribes and other partners.”

“This report offers us a road map for stemming and reversing the decline,” said Fish and Wildlife Service Director Dan Ashe. “It documents a number of successes in wetlands conservation, protection and reestablishment, and will be used to help channel our resources to protect wetlands where they are most threatened and reduce further wetland losses.”

The net wetland loss was estimated to be 62,300 acres between 2004 and 2009, bringing the nation’s total wetlands acreage to just over 110 million acres in the continental U.S., excluding Alaska and Hawaii.

The rate of gains from reestablishment of wetlands increased by 17 percent from the previous study period (1998 to 2004), but the wetland loss rate increased 140 percent during the same time period. As a consequence, national wetland losses have outpaced gains.

The net loss includes a combination of gains in certain types of wetlands and losses in other types, especially forested wetlands.

“In a five year period, we lost over 630,000 acres of forested wetlands, mostly in the Southeast—an area equal to half a million football fields each year,” Ashe said. “We should all be concerned about the substantial loss of this diminishing resource, which helps ensure good water quality for local communities and provides vital habitat for a diversity of important wildlife species.”

The southeast U.S., primarily freshwater wetlands of the Atlantic and Gulf coastal plain, and the lower Mississippi River experienced the greatest losses. Losses were also observed in the Great Lakes states, the prairie pothole region, and in rapidly developing metropolitan areas nationwide. The reasons for wetland losses are complex and reflect a wide variety of factors, including changes in land use and economic conditions, the impacts of the 2005 hurricane season on the Gulf Coast and climate change impacts.

This report does not draw conclusions regarding the quality or condition of the nation’s wetlands. Rather, it provides data regarding trends in wetland extent and type, and it provides information to facilitate ongoing collaborative efforts to assess wetland condition. Further examination of wetland condition on a national level has been initiated by the Environmental Protection Agency in conjunction with the U.S. Fish and Wildlife Service and other federal, state and Tribal partners.

Wetlands provide a multitude of ecological, economic and social benefits. They provide habitat for fish, wildlife and a variety of plants. Wetlands are nurseries for many saltwater and freshwater fishes and shellfish of commercial and recreational importance. Wetlands are also important landscape features because they hold and slowly release flood water and snow melt, recharge groundwater, act as filters to cleanse water of impurities, recycle nutrients, and provide recreational opportunities for millions of people.

The report, Status and Trends of Wetlands in the Conterminous United States 2004-2009, is the most recent of the five reports to Congress reporting on the status and trends of wetlands across much of the U.S. since the mid-1950s.

The mission of the U.S. Fish and Wildlife Service is working with others to conserve, protect and enhance fish, wildlife, plants and their habitats for the continuing benefit of the American people. We are both a leader and trusted partner in fish and wildlife conservation, known for our scientific excellence, stewardship of lands and natural resources, dedicated professionals and commitment to public service. For more information on our work and the people who make it happen, visit www.fws.gov.