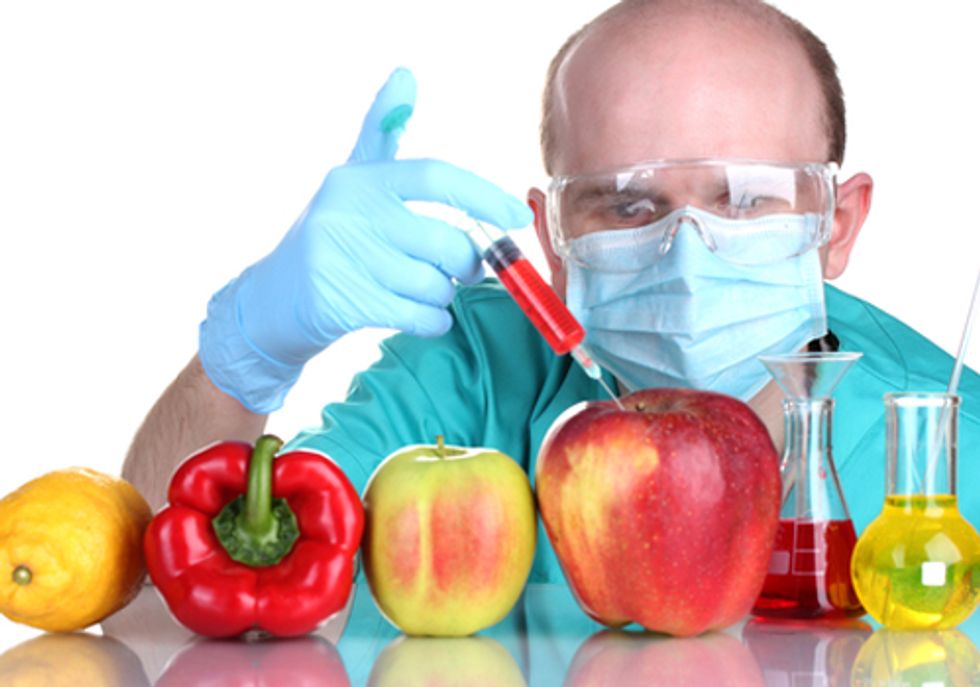 Genetically engineered (GE) foods have never been safety tested by the U.S. Food and Drug Administration (FDA), thanks to a 20-year-old policy that says it’s up to the biotech companies to determine the safety of genetically engineered (GE) foods. So while all other developed countries require safety testing for GE plants, the government agency in charge of protecting U.S. citizens lets biotech companies, who stand to make billions in profits from GE foods, conduct their own “voluntary safety consultations.”

GE foods have been linked to a number of health safety problems, including the introduction of new allergens or increased levels of naturally occurring allergens, of plant toxins and changes in nutrition, according to Michael Hansen, Ph.D. Hansen, a senior scientist for the Consumers Union, who has studied genetically modified organisms (GMOs) for more than 20 years.

Meanwhile, a growing body of peer-reviewed studies in the scientific literature suggests genetic engineering is linked to allergies and other adverse effects and increased pesticide use. The United Nations/World Health Organization food standards ... and the American Medical Association have called for mandatory safety testing of genetically engineered foods. The U.S. FDA continues to fail to meet that standard.

If the FDA isn’t going to test GE foods for safety, the least it could do is require labeling, so people can choose to avoid GMOs if they want. But so far, the FDA has rejected labeling under the controversial argument that GE foods are “substantially equivalent” to their non-genetically engineered counterparts.

More than 60 countries already label genetically engineered (GE) foods, including all of Europe, Australia, Japan, China and Russia. The U.S. and Canada stand alone as the only two industrialized countries yet to provide citizens the fundamental, democratic right to know what’s in the food they eat and feed their children.

The FDA’s refusal to support this basic right stands in direct defiance of the overwhelming will of the American people. The FDA has received more than a million petitions from concerned citizens demanding that GMOs be labeled—the most received on any issue in the Agency’s history. The most recent poll shows that the overwhelming majority—82 percent—of Americans want mandatory labeling laws. But our calls for transparency continue to fall on deaf ears.

Failure to label GMOs forces consumers to serve as test subjects for a massive GMO experiment, and makes it nearly impossible to trace health issues back to their source. It also prevents small farmers, the organics industry, and truly natural food producers from competing on an equal playing field.

Is it any wonder the FDA gives the biotech industry free rein, when it allows Monsanto employees to revolve in and out of its doors?

Michael Taylor, the FDA’s Deputy Commissioner of Food since January 2013, is the architect of the FDA’s substantial equivalence policy, used to justify no safety testing and no labeling of GMOs. One look at Taylor’s career trajectory and it’s clear how he arrived at such a policy.

Taylor’s first job out of law school, in 1976, was staff attorney for the FDA. In 1981, he left the FDA to work as an attorney in the food and drug practice of King & Spalding, a private law firm representing Monsanto. In 1991, it was back to the FDA, in the newly created post of Deputy Commissioner for Policy. Between 1996 and 2000, after briefly returning to King & Spalding, Taylor became vice president for public policy at Monsanto.

Dizzy yet? There’s more. In 2009, Taylor once again returned to the FDA as senior advisor to the FDA Commissioner. Then, in January 2010, President Obama appointed Taylor to yet another newly created post at the FDA: Deputy Commissioner for Foods.

GMO safety testing doesn’t stand a chance, as long as Taylor bounces between the FDA and Monsanto—despite the fact that numerous FDA scientists, before and after creation of the FDA’s substantial equivalence policy, had expressed concerns that genetic modification of the food supply was a potential threat to human health requiring more study before being approved for public consumption.

The FDA did its best to sneak GE salmon by consumers in late December, when it quietly announced it was launching a 60-day public comment period. The announcement followed the release of the FDA’s Environmental Assessment of GE salmon, which Michael Hansen, PhD, senior scientist with the Consumers Union, described as "flawed and inadequate."

An outraged public inundated the agency with thousands of comments. The FDA responded by extending the public comment period an additional 60 days. But given the agency’s propensity to fast track GE crops, do we really think it will put the kibosh on what could become the first GE animal to enter the U.S. food supply?

The FDA claims “Frankenfish” won’t harm the environment, endanger human health, or harm natural populations of salmon. This accepted narrative conflicts with the FDA’s own data—derived from AquaBounty’s internal research—which shows the GE fish increases the potential for allergies. And do we really want to eat a fish that contains elevated levels of the growth hormone, IGF-1, linked to prostate, breast and colon cancers?

More than 40 Congress members have urged the FDA to conduct a more rigorous review of environmental and health safety concerns of GE salmon before approving it. So far, the FDA has failed to comply.

The FDA’s love affair with Monsanto has led to the privatization, and patenting, of the very source of life: seeds. Monsanto is allowed to sell its patented GE "Roundup Ready" soybean seeds, and other patented seeds, to farmers under a contract that prohibits the farmers from saving the next-generation seeds and replanting them. Farmers who buy Monsanto’s GE seeds are required to buy new seeds every year. Monsanto then sells the same farmers its proprietary pesticides, like Roundup, that can be sprayed in huge amounts on Monsanto’s patented Roundup Ready crops, killing everything except the GE plants.

It’s a win-win for Monsanto. But everybody else loses.

Monsanto promised farmers that the company’s Roundup Ready scheme would increase yields and profits. Not true. Since 1995, the average cost to plant one acre of Monsanto’s soybeans has risen 325 percent, according to the Center for Food Safety. Corn seed prices are up by 259 percent. Those increases don’t include the cost of the lawsuits Monsanto has aggressively filed against farmers the company claims have violated patent agreements. By the end of 2012, Center for Food Safety calculates that Monsanto had received over $23.5 million from patent infringement lawsuits against farmers and farm businesses.

Monsanto promised that its GE crops would help the environment by reducing the need for pesticides. But according to the U.S. Department of Agriculture, farmers used up to 26 percent more chemicals per acre on herbicide-resistant crops than on non-GE crops. And as several dozen aggressive "superweeds" have become resistant to glyphosate, the primary herbicide used on GE crops, the biotech industry is ramping up its war on weeds with a new generation of GE crops that can surviving spraying with 2,4 D, paraquat and other super-toxic herbicides.

And what about Monsanto’s promise that GE seeds would feed the world’s hungry? Debunked. In 2010, the Food and Agriculture Organization of the United Nations warned that the loss of biodiversity will have “major impact on the ability of humankind to feed itself in the future.”

Who is the FDA really looking out for? Hard to believe it’s the U.S. consumer.