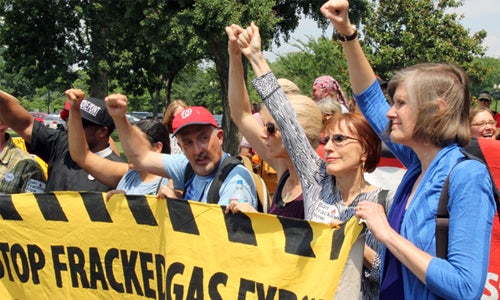 On Sept. 21, we join tens of thousands of people from across the country in the historic People’s Climate March in New York City. We’re thrilled to be marching alongside a diverse spectrum of Americans to demand meaningful action on climate change—the pivotal issue of our time and one on which millions of lives and future generations hinge.

People will be marching with a wide range of views and agendas, but as we prepare for this momentous and powerful event, here are five reasons the two of us will hit the streets of New York on Sunday. 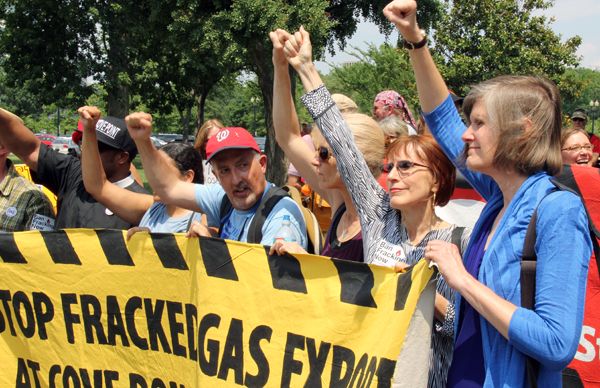 Sandra Steingraber and Wenonah Hauter at a Cove Point rally in July.

Studies indicate we are now fast approaching climate tipping points, after which extreme changes in global temperatures will no longer be preventable, setting us on a collision course with disaster. Temperature increases, for example, trigger dust storms and sooty Arctic wildfires that are darkening the snowfields of Greenland. In turn, darker snow absorbs more heat, and further increases air temperatures, triggering even more dust storms and wildfires. The result is a feedback loop of runaway warming. We can still intervene and avoid many such tipping points, which lie just ahead, but we can’t do so via delays, half-hearted efforts, or individual lifestyle changes alone. Current climate science warns that to have a “good” chance—that is, somewhat better than 50-50 odds—of keeping warming below 2 degrees Celsius requires a very rapid, system-wide transition off all fossil fuels, leaving most coal, oil, and gas underground. On Sunday we’ll be marching to call on our elected leaders—at all levels of government—to take bold and decisive action in line with the science before it is too late.

We appreciate President Obama’s recent decision to use executive action to address climate change, but the initiative he recently proposed—a set of U.S. Environmental Protection Agency (EPA) rules to regulate power plants—are not nearly ambitious enough to solve the problem. Because these rules promote a switch from coal to fracked natural gas, they may even be counterproductive. Studies show that drilling and fracking operations leak methane, a super-charged greenhouse gas. So do pipelines and all the other pieces of infrastructure that process and carry the fracked gas. At best, only 40 percent of these leaks are fixable. A rapid build-out of fracking means an exponential increase in methane leaks, making natural gas at least as bad for the climate as coal—and maybe even worse, particularly in the critical short term. Further, the proposed rules also are overly modest in the goals they set for carbon dioxide reduction. These small cuts aren’t enough to make any substantial progress. On Sunday, we’ll be taking that message to New York City. We have also launched a petition with actor and activist Mark Ruffalo telling President Obama that any climate change solution cannot include fracking.