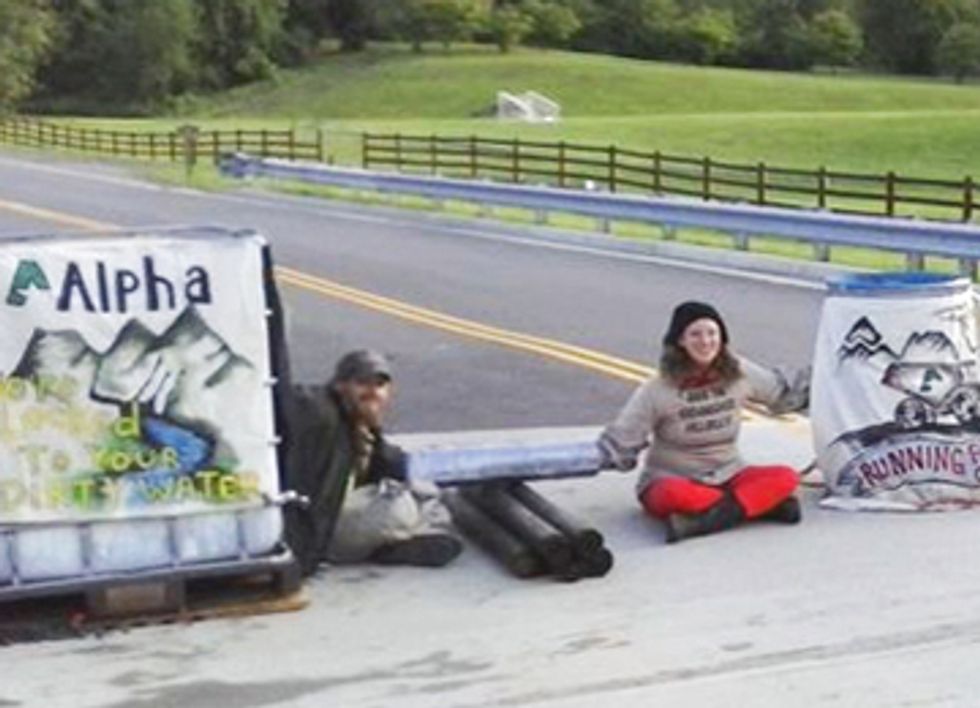 This morning, three residents of Central Appalachia and two supporters with Mountain Justice chained themselves to an industrial tank of black water in front of Alpha Natural Resources’ headquarters in Bristol, VA, to protest Alpha’s mountaintop removal strip mining and coal slurry operations across the region. All five blockaders have been arrested.

“I’m risking arrest today because mountaintop removal has to end now for the future viability of Appalachia,” said Emily Gillespie of Roanoke, VA, whose work with the Mountain Justice movement is inspired by Appalachian women’s history of non-violent resistance. The tank of water represents coal contamination from affected communities across the Appalachian region.

“I live downstream from Alpha’s Brushy Fork coal slurry impoundment on Coal River. If that impoundment breaks, my whole family would be killed,” Walk said. “Even if it doesn’t, we’re still being poisoned by Alpha’s mining wastes everyday. I’m here to bring the reality of that destruction to the corporate authorities who are causing it, but who don’t have to suffer its consequences.”

More than 20 peer-reviewed studies since 2010 demonstrate a connection between mountaintop removal coal mining operations and increased cases of kidney, lung and heart diseases, as well as increased birth defects and early mortality. The Appalachian Community Health Emergency Act, currently in subcommittee in Washington, D.C., calls for a moratorium on new mountaintop removal operations until a definitive, non-partisan study can demonstrate the reason for these community health emergency levels of health impacts.

The impoundment at Brushy Fork holds back almost 5 billion gallons of toxic sludge and is considered the largest earthen dam in the Western hemisphere. Recently leaked records show that coal slurry impoundments in Appalachia failed 59 out of 73 total structural tests performed by the Office of Surface Mining. “Alpha is only profitable because they’re allowed to gamble with our lives—and we’re the ones who pay the cost of their negligence and toxic pollution,” Walk said.

Alpha has lost numerous lawsuits relating to pollution from mining wastes in recent years, but they continue to violate safety regulations and expand their hazardous operations. After refusing to take responsibility for the massive floods caused by the King Coal Highway and their destructive mountaintop removal mining practices, Alpha continues to push forward similar projects, such as the controversial Coalfields Expressway in Virginia.