Fishing for Fun? It Has a Bigger Environmental Impact Than We Thought 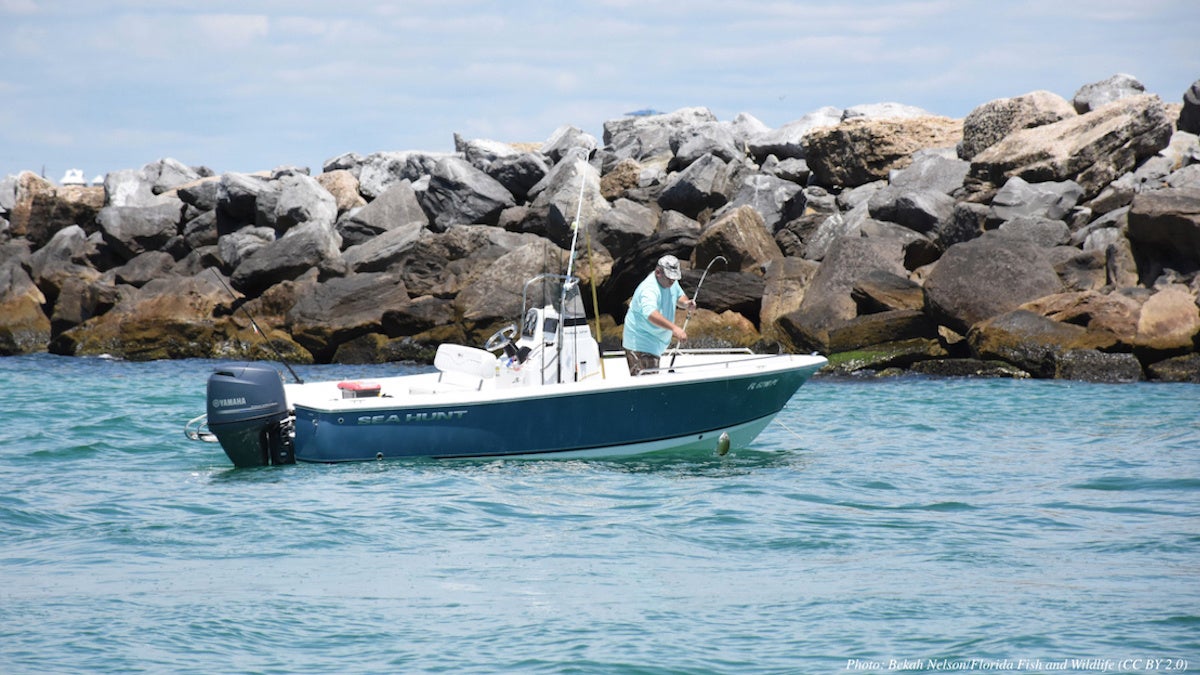 Let’s go fishin’! After all, a lone angler fishing from a dock or a few friends going out to sea can’t have all that much of an effect on fish populations … right?

“When you’re floating in the open ocean, it can be hard to imagine that your hobby will have an impact on the overall health of a fishery,” said Sepp Haukebo, who works on recreational fisheries conservation issues for the Environmental Defense Fund. “But multiply the number of fish a single angler catches and discards in a day by millions of anglers and you have a significant harvest on your hands.”

Haukebo echoes points made in two new studies, published in the journals Fish and Fisheries and Frontiers in Marine Science, that show recreational fishing has a much bigger collective effect on oceanic species than previously realized, with nearly one million tons of fish caught every year.

Far from being an insignificant drop in the proverbial ocean, this is a massive amount of fish — about 1% of total global marine fisheries catch, a much higher number than many scientists and managers used to believe.

So how is it that the actions of individuals can have such a far-reaching effect? Recreational anglers usually catch just a few ocean fish in a whole day, while industrial-scale commercial fishing often uses miles-long gear and catches tons of marine life at a time.

Part of the answer is scale: Previous research has shown that there are a lot more recreational anglers than there are commercial fishing vessels — at least 220 million people go fishing for fun every year all around the world.

The marina in Valencia, Spain. Mark Chinnick (CC BY 2.0)

That number is expected to grow as people and countries become more affluent, said Jessica Meeuwig, a professor at the University of Western Australia and a coauthor on the Frontiers in Marine Science paper.

Another part of the answer involves economics: For people and companies trying to make a profit from fishing — like with commercial fisheries — there’s an incentive to stop fishing when populations get low.

But if you’re fishing for fun, you’re paying for the experience, and the experience of catching a relatively rare fish is often considered worth paying extra.

Indeed there are many threatened populations of fish where commercial fisheries are banned but recreational angling continues.

Additionally, a subset of recreational anglers called trophy anglers intentionally target the biggest individuals in a population, often with the goal of getting a perceived-as-prestigious certificate that says they hold a record for catching the biggest fish of that species.

“Recreational fisheries targeting larger fish means they are taking the most fit individuals, the big breeders, out of the population,” she said. Bigger fish tend to reproduce more often and have a greater number of young at a time. This culling preference is different from commercial or subsistence fishing, which aim to catch as many fish as possible, but not necessarily the largest individual member of a species.

There are other factors are play, although those aren’t always as clear.

“Recreational catch of threatened species is an issue that’s poorly understood,” said Peter Kyne, a senior research fellow at Australia’s Charles Darwin University who was not affiliated with either of the new papers. “In Australia, this is a significant issue for the grey nurse shark on the east coast,” he said. “Their habitat is close to major cities where recreational fishing levels are high. Even in remote areas of northern Australia, catches of river sharks are an issue — although they are protected, they’re similar in appearance to a number of common non-threatened species and anglers may not recognize them.”

The research also found that most nations don’t do a very good job managing their recreational fisheries — especially when compared to their commercial fisheries.

“Governments fail to recognize that recreational fisheries can decimate populations” or that they can be as important to monitor as commercial fisheries, said Warren Potts, a professor of fisheries science at Rhodes University and lead author of the Fish and Fisheries paper. “This ignores or underappreciates recreational fishing’s economic and ecological effects and causes governments to fail to prioritize regulating the practice.”

More than half of experts surveyed for the paper raised significant concerns about their nation’s recreational-fisheries management. No experts from developing nations, where the popularity of recreational fisheries has exploded as international tourists seek out “exotic” places to fish, believed that their countries effectively manage those fisheries.

But Robert Arlinghaus, a professor of fisheries management at Humboldt University in Germany who was not involved with either paper, pointed out that many countries do employ a basic fisheries-management regulation called a minimum size limit — in other words, you can’t land a fish if it’s below a certain size and hasn’t had the chance to reproduce yet. This isn’t exactly the cutting edge of adaptive science-based management, but it’s a lot better than nothing.

Arlinghaus feels that characterizing the majority of the world’s recreational fisheries as ineffectively managed may be taking things a little too far.

Another major issue with recreational fisheries management boils down to numbers — or lack of them. In most places nobody knows exactly how many fish are caught.

That’s another difference from commercial fisheries — it’s just easier to gather data when you’re dealing with a limited number of fishing vessels than with hundreds of millions of individual people. 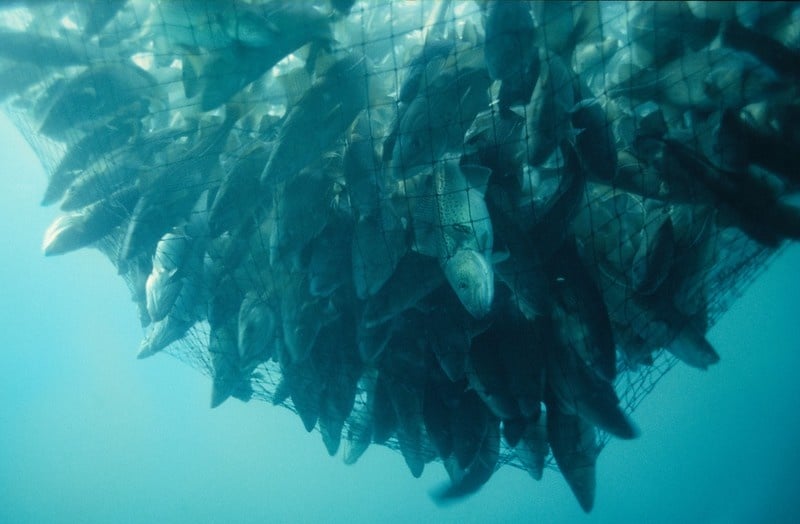 “Some countries keep detailed data on their recreational fisheries catch, but others don’t,” said Daniel Pauly, principal investigator of the Sea Around Us project at the University of British Columbia and a coauthor on the Frontiers in Marine Science paper. He added that some countries use different agencies to collect data from recreational and commercial fisheries, and those groups don’t always speak with each other or consolidate their findings.

“If you know there are recreational fisheries in a country, but there’s no data, you have to be creative,” said Pauly. “You can’t say ‘there’s no data, so we’ll assume nothing has been caught.'”

To resolve this data gap and estimate the global catch of marine recreational fisheries, the paper used a method called “catch reconstruction” — a mix of computer analysis and good, old-fashioned detective work.

Catch reconstruction, he explained, assumes that fishing doesn’t happen in a vacuum. Even if you don’t have data on how many fish are caught or brought to shore, there’s often other information showing things like how many boats used a marina, how much fuel they used, and how much seafood was for sale in local markets.

That’s where Pauly and his team came in. They consolidated information from a variety of sources and built a bigger picture.

Pauly provided an example of how they accomplished this.

“In West Africa, many people thought there weren’t any substantial recreational fisheries, because there’s no catch data available,” he told me. “But there are fishing lodges there for tourism, and those lodges post images of what people catch on social media and websites. We know how many people go to those lodges, because tourists entering the country are reported and they fill in where they’re staying. If we know how many people visit, how long they stay and what’s usually caught, we can estimate catch even with an absence of official statistics.”

This isn’t foolproof. Potts pointed out that this kind of formulation can cause complications. He noted that the paper estimated the catch from one fishing lodge and extrapolated it to two others, including one lodge that exists on paper but hasn’t actually been built yet. Pauly responded to this concern by pointing out that “we were able to generate first estimates of the catch of West African recreational fisheries … but the fact these these estimates can be improved goes without saying.”

Even though the results are estimates, they suggest two potentially troubling trends. First, all recreational fisheries catch is significantly increasing in developing-world nations, especially in Africa and South America. For example, the number of recreational fishing licenses in Brazil jumped from 276,500 in 2011 to more than 400,000 just two years later. 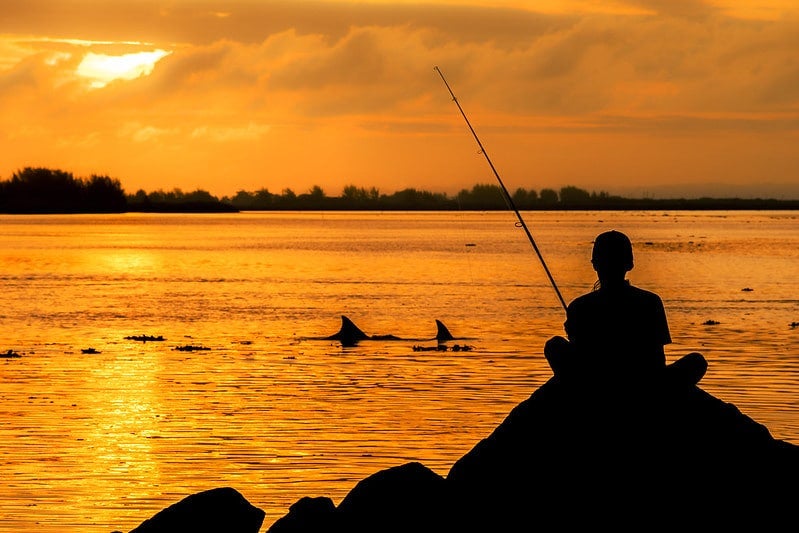 Fishing off the coast of Brazil, with dolphins swimming nearby. Felipe Vaduga (CC BY 2.0)

Second, recreational fisheries targeting sharks and rays are on the upswing worldwide. Sharks and rays represented less than 1% of total recreational catch in the 1950s, but about 6% today, and are especially increasing in South America, the Indo-Pacific and West Africa.

“This is a cause for concern given the threatened status of many species of sharks and rays,” Meeuwig said. Previous research has shown that about 24% of sharks and related species are threatened or endangered. “The capture of large sharks is particularly worrisome,” she adds, because of their importance as breeders.

It’s also an opportunity to shift our attention to a previously invisible or ignored problem. Increasingly, as scientists and environmentalists have been raising the alarm about commercial and industrial overfishing, they’ve implicitly or explicitly sent the message that fishing for fun has so little environmental impact that it wasn’t worth considering.

And Arlinghaus cautioned that the papers’ recommendations about recreational fishing have already been misinterpreted in some circles. A widely shared Nature News article about this paper claimed “hobbyists’ harvest of sharks and rays have soared, and catch and release is no solution,”— despite the fact that the paper did not address catch and release. Additionally, some on social media claimed that this paper was proof that all recreational angling needed to be shut down, which was not a recommendation issued by the paper.

Arlinghaus warned against making those leaps in logic based solely on the data from these papers. “We can’t learn much about the conservation concerns associated with a fishery just by looking at landings,” he pointed out.

But the Fish and Fisheries paper did contain some recommendations for improvement.

“There are some basic guidelines for improving governance that can be followed and should improve the quality of a governance of a country’s recreational fisheries,” Potts said. These include clearly defining recreational angling in national legislation and stressing how its management differs from commercial fisheries. The paper also calls for increased cooperation with stakeholders to gather more effective data and ensure compliance with rules, and scientific monitoring of populations of fishes targeted by recreational fisheries — all things that are currently done relatively well in the U.S. and Australia, but done relatively poorly in large parts of the developing world.

“I want to commend these authors for their recommendations,” Haukebo said. “This framework is a great reference for any nation that is aspiring to improve, or even just establish, responsible management of their recreational fishery.”

While Haukebo and other experts say you don’t have to feel bad about “goin’ fishin'” with family and friends just yet, the science presented in these papers makes it clear that in some places individual actions can collectively pose a significant threat to marine species — and that’s something governments and conservationists around the world, not to mention anglers, need to start to address.

David Shiffman is a marine biologist specializing in the ecology and conservation of sharks.