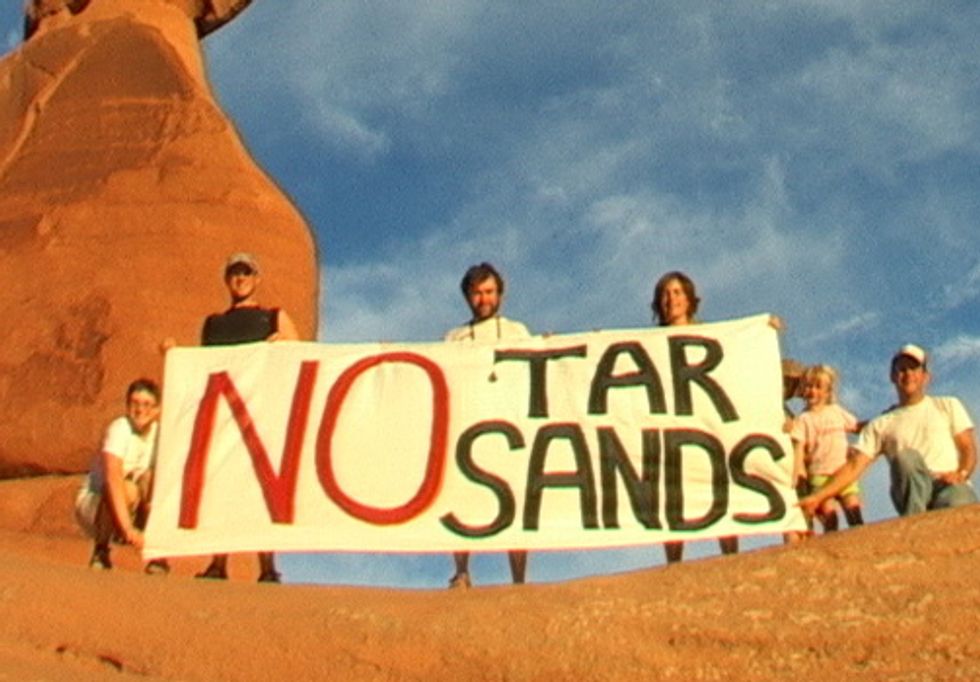 A group of about 10 people hiked to Delicate Arch in Utah on July 17 as part of an international protest to stop tar sands developments across the globe. On Oct. 24, the Utah Water Quality Board approved the first tar sands mine on U.S. soil, handing a permit to U.S. Oil Sands.

The race is on for the up-and-coming U.S. tar sands industry. To date, the tar sands industry is most well-known for the havoc it continues to wreak in Alberta, Canada—but its neighbor and fellow petrostate to the south may soon join in on the fun.

On Oct. 24, the Utah Water Quality Board (UWQB) approved the first tar sands mine on U.S. soil, handing a permit to U.S. Oil Sands, a company whose headquarters are based in Alberta, despite it's name.

In a 9-2 vote, the UWQB gave U.S. Oil Sands the green light to begin extracting bitumen from its PR Spring Oil Sands Project, located in the Uinta Basin in eastern Utah. The UWQB concluded that there's no risk of groundwater pollution from tar sands extraction for the prospective mining project.

Members of the public were allowed to attend the hearing but "were not permitted to provide input," according to The Salt Lake Tribune.

"The PR Spring project remains on track for commercial startup late in 2013, and the decision ultimately illustrates the merits that our responsible approach to oil sands development has for the environment and local communities," Cameron Todd, CEO of U.S. Oil Sands stated in a press release in response to the decision.

Living Rivers, the Moab, Utah-based offshoot of Colorado Riverkeeper says it will likely appeal the decision to the state's court system, "arguing that tar sands mining will contaminate groundwater in a largely undeveloped area of Utah's Book Cliffs region that drains into the Colorado River," explained the Associated Press.

In an Oct. 9 interview on Democracy Now!, John Weisheit, conservation director of Living Rivers said the harms associated with looming tar sands extraction in the Uinta Basin aren't merely limited to groundwater contamination. Rather, the entire surrounding ecosystem would be endangered. He told Amy Goodman:

Well, we’re concerned because this particular locality is in a high-elevation place called the Tavaputs Plateau, and it’s one of the last wild places in Utah. It’s a huge refuge for elk and deer. It’s also a beautiful watershed. It not only would affect the Colorado River, but it also—at this particular site, it’s at the top of the drainage, so it would also affect the White River and the Green River.

The PR Spring mining site is 5,930 contiguous acres with a "land position totaling 32,005 acres of bitumen extraction rights on leases in the State of Utah," according to U.S. Oil Sands' financial statement for the first half of 2012. AP explained that U.S. Oil Sands plans to extract 2,000 barrels of tar sands crude in Utah in 2012, "in the start of what could grow into a much larger operation."

Two main grassroots activist groups are currently battling Utah's upstart tar sands industry: Utah Tar Sands Resistance and Before It Starts. "The Utah Water Quality Board is an entirely inappropriate authority for determining the safety of both water safety and water availability for the 30 million people who depend on the Colorado River, most of which do not live in Utah," Kate Finneran, co-director of Before It Starts told DeSmogBlog in an interview.

Though Living Rivers will appeal the decision, U.S. Oil Sands isn't wasting any time in forging ahead, and according to the AP is already "looking to take on a partner, ordering equipment, hiring Utah contractors and preparing the site" for extraction.

According to a Sept. 2012 story by Inside Climate News, 5,900+ acres is a drop in the bucket for an industry sitting on some 232,065 acres of land open for tar sands extraction in the state of Utah.

The U.S. tar sands are deemed a "strategically important domestic resource that should be developed to reduce the growing dependence of the U.S. on politically and economically unstable sources of foreign oil imports" in Sec. 369 of the Energy Policy Act of 2005.

Most well-known for the "Halliburton Loophole," the Energy Policy Act of 2005 exempts oil and gas corporations from complying with the dictates of the Clean Water Act and the Safe Drinking Water Act, making the chemicals injected into the ground (and into groundwater) while hydraulic fractruing for unconventional gas a "trade secret." The law was written with the helping hand of oil and gas executives via then Vice President Dick Cheney's Energy Task Force in 2001.

By legal mandate, it appears, the race to extract bitumen from "Tar Sands South" has just begun. It's a race that, like the one being run by its Canadian neighbor to the north, can't possibly end well for the ecosystem, public health, water quality and the global climate.