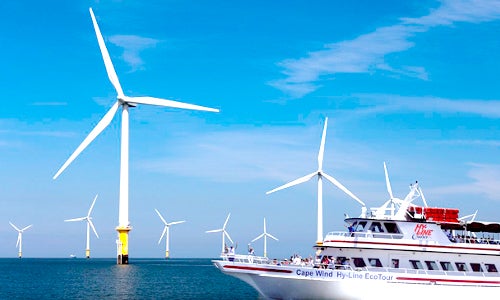 It’s been an active week in court for what could eventually be the nation’s first offshore wind farm.

First, the U.S. Court of Appeals District of Columbia Circuit upheld the Federal Aviation Administration’s (FAA) approval of a wind farm to be constructed off the shores of Cape Cod. The FAA in 2012 approved the $2.6 billion Cape Wind farm, ruling that it would not present a hazard to air traffic.

Wednesday’s decision marked the 12th victory for developers Cape Wind and NSTAR against opponents in court.

The farm’s biggest rivals are The Alliance to Protect Nantucket Sound and a group of residents from Barnstable, MA. Billionaire Bill Koch—who once referred to the project as “visual pollution”—told Commonwealth Magazine last year that he has given $5 million to the Alliance as part of a strategy to delay Cape Wind. 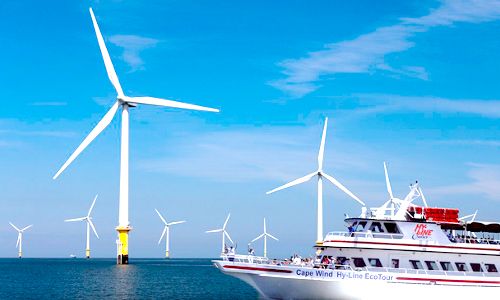 An artist’s rendering of the Cape Wind Farm and a boat tour of the farm. Photo credit: Cape Wind

“The Alliance to Protect Nantucket Sound, the Town of Barnstable and their financial backer—coal billionaire Bill Koch—have failed yet again in their continuing campaign to use the courts to delay the financing of Cape Wind,” Cape Wind Communications Director Mark Rodgers said. “The court’s definitive decision is an important legal victory that brings America that much closer to launching its offshore wind industry, a keystone in America’s renewable energy future.”

However, officials at Cape Wind and NSTAR knew they were faced with yet another Koch-backed lawsuit before they celebrated Wednesday’s decision. According to The Associated Press, the Alliance to Protect Nantucket Sound, Barnstable and several Cape Cod businesses filed a federal lawsuit Tuesday against project developers and Massachusetts regulators alleging that the state discriminated against out-of-state power companies by brokering the deal between utility NSTAR and Cape Wind. The plaintiffs say that deal will drive up electricity costs.

Cape Wind is slated to host 130 turbines for a potential output of 468 megawatts (MW). That amount is enough to power 75 percent of Cape Cod and the Islands.

Cape Wind reached power purchase agreements with National Grid and NSTAR between 2010 and 2012. The lawsuit alleges that state regulators violated the Federal Power Act and Supremacy Clause of the U.S. Constitution by setting wholesale rates for the contracts. That act is typically reserved for the Federal Energy Regulatory Commission.

Rodgers said the complaint was “frivolous and without merit.”

“We understand the need for green sources of energy, but it is unfair to be forced to pay three times the cost of other green energy for Cape Wind,” Joe Keller, an Alliance to Protect Nantucket Sound fundraiser and real estate broker whose company is listed on the lawsuit, said in a statement from the Alliance.

During the 2008 election, 87 percent of the voters in 11 towns voiced approval of the project. However, Keller told a very different story in a 2013 Letter to the Editor of Commonwealth, saying wind turbines would negatively impact the quality of life and real estate values.

“Ten years ago, I told my wife, Devonia, that if Cape Wind gets built, it signals the end of the dream of Cape Cod living which originally brought us here,” Keller wrote. “We feel very strongly that, although alternative energy is hugely important, this is the wrong place for it!

“When we stand on the tee of hole 15 at Hyannisport or pull out of Osterville Harbor on a beautiful day, the last vision we will want to see and hear are 130 turbine towers.”

A joint report released Jan. 9 by the University of Connecticut and Lawrence Berkeley National Laboratory states that the entities found “no evidence that wind turbines affect property values.” They used Massachusetts as the subject of the study.