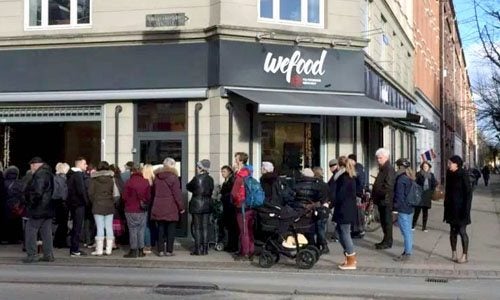 In an effort to stamp down on food waste, Denmark has opened a supermarket that exclusively sells food that’s usually meant for the dumpster.

WeFood, in Amager, Copenhagen, sells bread, fruits, vegetables, dairy, meats, frozen goods and dry foods that are past its official expiration date as well as household goods with slight imperfections or damaged packaging, according to The Local Denmark. Prices at the store are 30 to 50 percent cheaper compared to any other supermarket in the city.

The new venture came out of successful crowdfunding as well as partnerships with large and small Danish grocers and manufacturers who help stock WeFood’s shelves with their perfectly edible but rejected food.

“WeFood is the first supermarket of its kind in Denmark and perhaps the world as it is not just aimed at low-income shoppers but anyone who is concerned about the amount of food waste produced in this country,” Per Bjerre from DanChurch Aid, the NGO behind the market, said at the store’s Feb. 22 grand opening.

“Many people see this as a positive and politically correct way to approach the issue.” 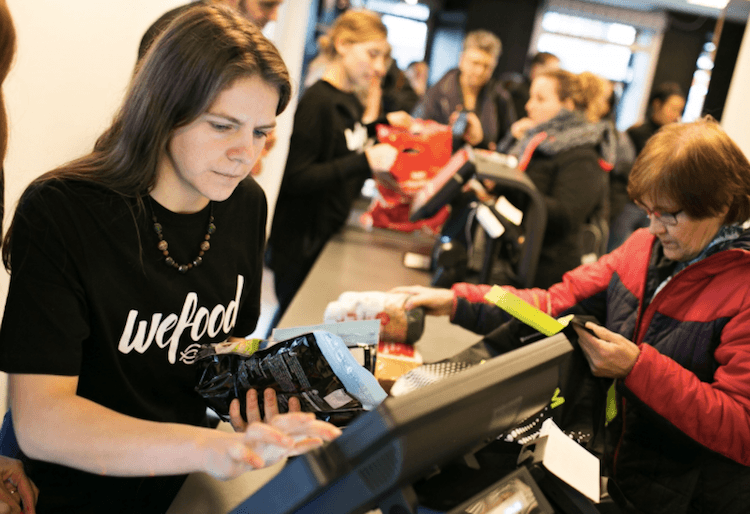 Customers of all socio-economic backgrounds have filed into WeFood since its grand opening last month. Photo credit: WeFood

The supermarket is run by volunteers and profits will go to the charity’s projects in developing countries such as South Sudan and Bangladesh, the Huffington Post reported.

The store has been a hit, as NPR reported, with folks lining the store’s sidewalk since doors opened. 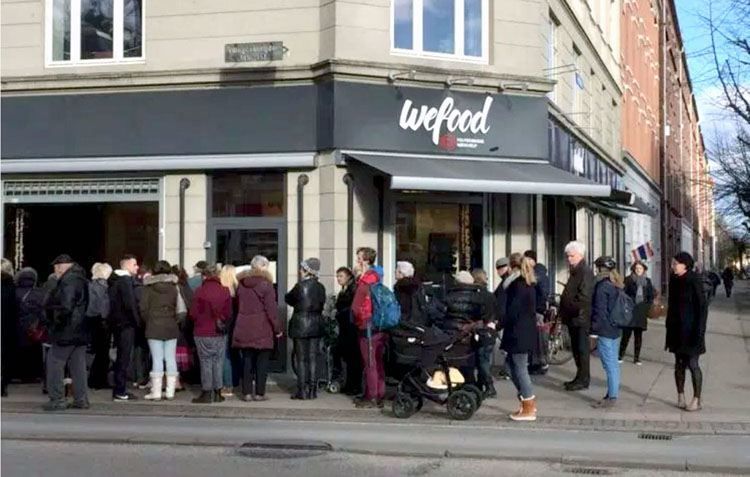 Bjerre explained to NPR that while some of WeFood’s customers are low-income people looking for a deal, most customers frequent the store for more political reasons. It so happens that Danes are in the midst of a country-wide anti-food waste movement and shop for surplus food like a national pastime, as NPR noted in a separate report.

"A supermarket like WeFood makes so much sense and is an important step in the battle to… https://t.co/QqUrKkwrRf pic.twitter.com/EvTCOHYnMv

“It’s ridiculous that food is just thrown out or goes to waste. It is bad for the environment and it is money spent on absolutely nothing. A supermarket like WeFood makes so much sense and is an important step in the battle to combat food waste,” Hansen said at the store’s opening.

Denmark has already made impressive strides in cutting food waste, reducing its volume by 25 percent over the past five years. For comparison’s sake, the average Danish person throws out 104 pounds of food per year whereas the average American throws out more than double the amount at 273 pounds per year.

Still, an estimated 700,000 tonnes of food is thrown out in Denmark every year costing the country 11.6 billion kroner (roughly $1.7 billion) per year, WeFood points out on its website.

“The new supermarket with surplus food is a good start in the fight against food and resource waste. But there are still barriers and rules that do nothing for food safety but make it difficult to give surplus food away,” Hansen said, adding that she plans to have further discussions about European Union food rules with her European colleagues.