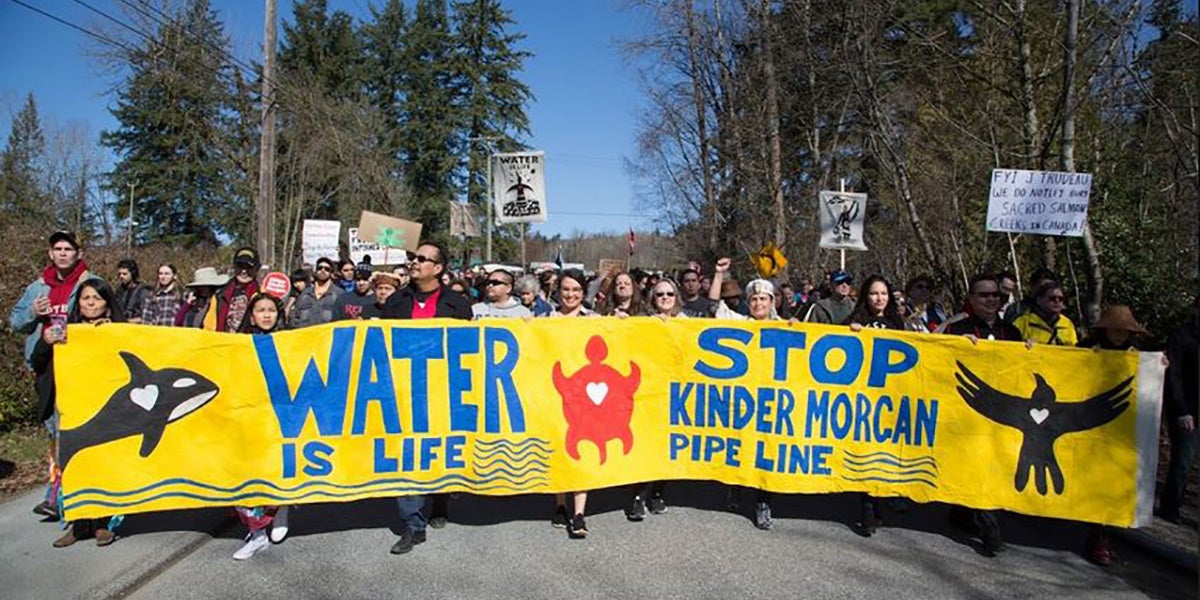 The campaign against the controversial Kinder Morgan pipeline escalated Saturday when Indigenous leaders from across Canada and the U.S. came together to inaugurate Kwekwecnewtxw—“the place to watch from”—whilst others started building a traditional Coast Salish “Watch House” near the pipeline route.

Although the Watch House stands on the line of exclusion zone surrounding the pipeline, the local community have vowed to not move from the tower until Kinder Morgan is defeated.

Building of the Watch House is expected to finish Monday. It will then become a focal point for resistance to the pipeline, which if completed, is expected to bring some 400 tankers a year to the ecologically and culturally sensitive coastline.

The highly controversial $7.4-billion project was approved by Canadian Prime Minister Justin Trudeau’s government in November 2016. It has subsequently been challenged in court by First Nations, the City of Burnaby, the City of Vancouver and the BC government.

And Saturday the local community was out in force. Some 10,000 local supporters marched to the site in solidarity. Speaker after speaker then condemned the pipeline, criticizing Canadian Prime Minister Justin Trudeau’s approval of the pipeline “a major step backwards” in both their relations with the Federal Government and also for the climate.

Grand Chief Stewart Phillip told the crowd: “We are gathering today to send a clear message to Kinder Morgan and Justin Trudeau that indigenous peoples across North America and British Columbians will never let this pipeline be built. I call on everyone in the crowd today and watching from home to join us in escalating action to stop Kinder Morgan in the coming days. Rachel Notley, we are not in the least bit intimidated by your desperate threats and we will not stop!”

Will George, a Tsleil-Waututh member also addressed the assembled protesters, who included members of the Mohawk Council of Kanesatake, Athabaska Chipewyan Nation and Ihanktonwan Dakota and Chickasaw Nations.

George said: “My ancestors built Kwekwecnewtxw—’a place to watch from’—when danger threatened our people. Danger threatens our people now, as Kinder Morgan tries to send hazardous diluted bitumen through our territory. Today we build our own watch house to protect the Salish Sea and the people who depend on it.”

George finished by stating that he will be staying in the Watch House “as long as it takes.”

Autumn Peltier, a 13-year old internationally recognized water ambassador from Wikwemikong First Nation in northern Ontario, spoke on behalf of the 150 First Nations and U.S. Tribes that have signed the Treaty Alliance Against Tar Sands Expansion in opposition to the Kinder Morgan pipeline, as well as Keystone XL and Enbridge’s Line 3 pipeline.

“Prime Minister Justin Trudeau has said we can protect the water, the coasts, and the climate while still building new tar sands pipelines like Kinder Morgan. But I came here to join with other water protectors to say that he’s wrong,” she said.

Not only is Trudeau tripping up on Canada’s climate commitments, but also on commitments he gave to communities back in 2013, when he said: “Governments might grant permits, but only communities can grant permission.”

As the Other98 has pointed out, this is a protest that could go global. “There are clear echoes of Standing Rock in the fight, which has been indigenous-led from the start.”

And if Kinder Morgan turns into Standing Rock 2, then Trudeau has a huge problem on his hands.