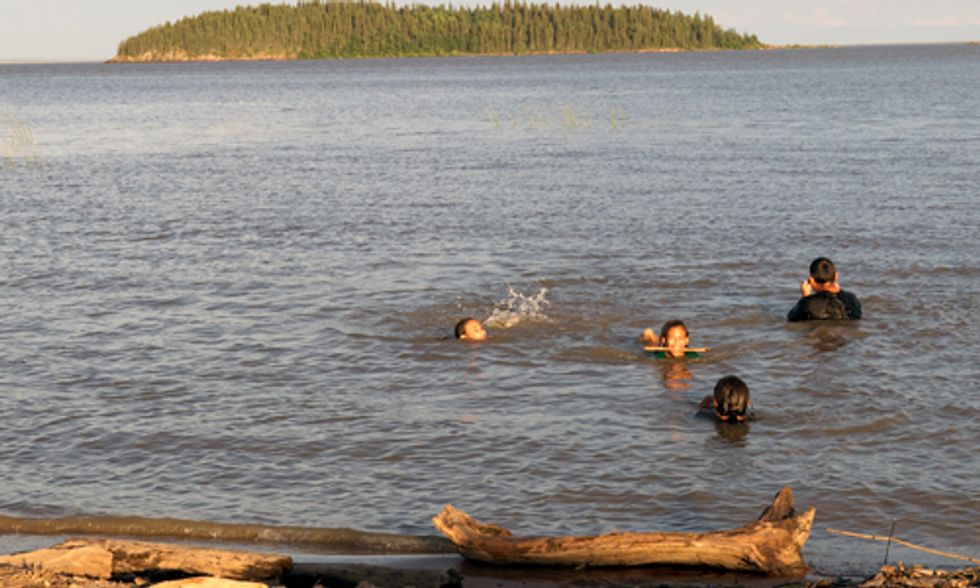 Imagine for a minute that for generations, you and your family lived on ancestral lands abundant with wildlife and a beautiful river running through it. Like every youngster born in your family, one of your elders took you out to the river and patiently taught you how to swim and fish in the warm summer sun. As a teenager you escaped to the river with your friends to eat junk food, drink your first beer and do cannonballs off the dock. When you met that someone special you took them to the overlook with the full moon shining on the gently rippling water to propose. Then when your youngsters were old enough, you took them to the river and the cycle started all over again. Until finally you grew old and spent your last years in a misty fog reliving the happy memories from a lifetime of experiences spent with friends, family and the river.

Then imagine a big international coal company hundreds of kilometers away ruined the possibility of those traditions being continued by your grandchildren. They took away the very heritage and customs that united your family through eons because they let one of their giant coal slurry dams full of arsenic, cadmium, lead, mercury and selenium fail. Instead of stopping the dam from breaking, they allowed a 1 billion liter toxic tidal wave of black slurry to poison your ancestral river. Then imagine that your government failed to tell you about the disaster and compounded that failure by waiting 19 days before they ordered the coal company to clean it up.

Unfortunately, this is not an imaginary nightmare for the Athabasca Chipewyan First Nation. This is now the devastating reality they face in the wake of Canada’s largest coal slurry spill at the hands of Sherritt International. It should come as no surprise to anyone that the First Nation is rightfully furious. The loss they are facing as Sherritt’s toxic coal plume moves inexorably to Fort Chipewyan is much more than the loss of the ability to fish or swim with their children. It is the loss of their heritage. How can anyone put a value on that or mitigate it? Yesterday they issued this press release calling for Minister McQueen and Gerry Protti to be fired for failing to do their job:

That Athabasca Chipewyan First Nation (ACFN) are seriously concerned with government inaction regarding the Sheritt Coal slurry spill that occurred on Oct. 31 resulting in close to a billion litres of contaminant entering tributaries of the Athabasca River and eventually the Athabasca River itself. The Alberta government and the Alberta Energy Regulator waited three weeks to issue a clean up order and release information about the contents of the spill.

“We are furious with the Alberta Energy Regulator and governments for the lack of response for the largest spill in Canadian history. We are asking for the resignation of Minister McQueen and Gerry Protti for failing to do their job. For three weeks we have been living in uncertainty about the safety and level of contamination of our water systems. For us, it’s not just about our drinking water, it’s about our rights and culture,” stated Chief Allan Adam of the Athabasca Chipewyan First Nation.

The Wood Buffalo Regional Municipality in Fort Chipewyan decided only yesterday they would shut down the water intake at the water treatment facility and work with Sheritt to deliver clean, safe potable water to members of communities along the path of the plume.

Bruce Maclean from Maclean Environmental Consulting, a company that works with local First Nations, raised some serious concerns and stated, “Water quality data from the first days of the spill indicate many contaminants of concern to be above CCME guidelines, some 70 times above the guidelines. This includes PAHs, cadmium, arsenic, lead, selenium, silver, thallium and even uranium. These numbers and contaminants represent real danger to human health and associated drinking water.”

Maclean also commented on the long term impacts of the settling of this sediment load and associated contaminants on fall spawning fish. “It will be difficult to assess without some serious sampling efforts, some of which may need to take place in the spring. We can assume that survival of fish eggs in the path of the plume will be compromised.”

“Government and industry continually ignore that our rights, our culture and our people rely on safe, clean eco-systems and waterways to continue our way of life,” stated Lorraine Hoffman, councillor for the Athabasca Chipewyan First Nation. “We can’t keep the moose, caribou, bison and fish from the contaminated plume as it travels downstream. This spill is just another example of both Alberta and Canada’s failure to protect the interests of not only First Nations, but the interests of all Canadians. Water is life, no matter who you are or where you are.”

Last year the federal government made sweeping changes to numerous environmental protection acts, however the Athabasca River was one of few rivers, lakes and oceans that maintained federal protected under the Navigable Protection Act. The ACFN is now questioning why the federal and provincial governments are allowing the continued abuse of this river system. To date there has been no contact with federal agencies about the implications of this spill.

“We have been raising concerns about the lack of safety and protection of the river and environment for years. This summer Dr. Timoney released a report Environmental Incidents in Northeastern Alberta’s Bitumen Sands Region outlining 9,262 industry incidents on the Athabasca river and how the government is failing to enforce environmental regulations. Now, the Athabasca is subject to the largest coal mine spill in Canadian history and it has taken governments three weeks to show any concern. Where is the federal protection? Something is seriously wrong with this picture,” stated Chief Adam.

In light of the new data, the Nation feels that a formal review of the official communication protocols around environmental disasters is needed. The huge lag time in reporting and overall lack of transparency and leadership has led the ACFN to take matters into their own hands. The ACFN will be launching their own sampling before, during and after the plume passes through their community.

If you stand in solidarity with the Athabasca Chipewyan First Nation, you can join their call to action by contacting Alberta Premier Alison Redford at premier@gov.ab.ca via email. Or by phone: