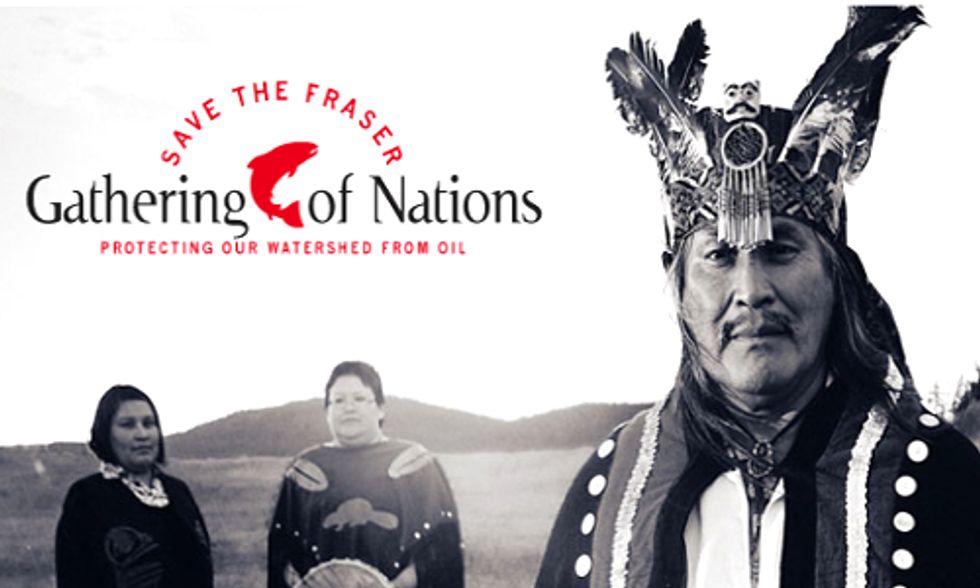 Today marks the third anniversary of the Save the Fraser Declaration, a declaration signed by more than 130 First Nations, which states:

We will not allow the proposed Enbridge Northern Gateway Pipelines, or similar tar sands projects, to cross our lands, territories and watersheds, or the ocean migration routes of Fraser River salmon.

The proposed 525,000 barrel per day Enbridge Northern Gateway tar sands pipeline would run 731 miles (1,177 km) from Alberta, traversing dangerous, hard to access mountains, and crossing sensitive river ecosystems that First Nations in the region rely on for the salmon that thrive there, on its way to the Spirit Bear Coast.

The pipeline would terminate in Kitimat, British Columbia, where giant oil supertankers, aiming to take tar sands to Asia or elsewhere in the world, would put coastal areas at risk of tar sands spills, a significant threat given the narrow channels as well as the large waves and strong winds often experienced in the region.

The Joint Review Panel, the joint Canadian Federal and British Columbia Provincial body that has been reviewing the Northern Gateway Pipeline, is expected to release its recommendation report about the impacts of the project and whether it should be built, by the end of the year, a significant step (though by no means the final step) in making a decision about this risky project.

Today, on the third anniversary, the Yinka Dene Alliance, a group of six First Nations strongly committed to stopping the Enbridge Northern Gateway tar sands pipeline, hosted a Save the Fraser Declaration press conference in Vancouver, BC, which recommitted the existing 130 signatories and where the Stellat'en First Nation added its voice.

The event also served to launch a Solidarity Accord for non-First Nations citizens to support the unbroken wall of opposition by First Nations to stop tar sands pipelines through British Columbia. Natural Resources Defense Council is standing in solidarity with and prepared to continue fighting beside our First Nation colleagues in this unbroken wall of opposition, as the ramifications of the tar sands extraction that the pipeline would cause and the potential for catastrophic pipeline and tanker spills are too grave to sit idle.

Chief Archie Patrick of the Stellat'en First Nation, signing on to the Save the Fraser Declaration, with the Yinka Dene Alliance chiefs behind him. Photo credit: Jen Lash

The event featured major speakers including Gavin McGarrigle, the B.C. Area Director of Unifor, Canada's largest private sector union, which represents tar sands workers; Jim DeHart, the president of the B.C. Wilderness Tourism Association and Peter Robinson, the CEO of the David Suzuki Foundation, along with other speakers, videos and letters of support from prominent individuals and organizations.

The Solidarity accord reads:

WHEREAS: Representatives of more than 130 First Nations have signed the Save the Fraser Declaration.
AND WHEREAS: The future of Aboriginal and non-Aboriginal people is bound together by our shared reliance on the lands and waters that sustain us.
AND WHEREAS: Mutual respect and cooperation is essential to ensuring that our collective future is a just and healthy one.
AND WHEREAS: Enbridge's Northern Gateway proposal would threaten thousands of existing jobs and expose communities to unacceptable risks.
NOW THEREFORE, IN RECOGNITION AND SUPPORT OF THE SAVE THE FRASER DECLARATION: We, the undersigned, say to our First Nations brothers and sisters, and to the world, that we are prepared to stand with you to protect the land, the water and our communities from the Enbridge pipelines and tankers project and similar projects to transport tar sands oil.

Some U.S. officials and media have tried to disingenuously argue that the climate impacts of Keystone XL are negligible because if the U.S. doesn't take the tar sands, it will be extracted anyways and sent through other pipelines like the Northern Gateway. Given the tremendous and growing wall of opposition, these arguments could not be more false; the Northern Gateway pipeline is far from a done deal.

As the deadline for the recommendation from the Northern Gateway Joint Review Panel draws close, First Nations' opposition to Enbridge is strong and growing and those Nations enjoy broad-based support from across the spectrum of Canadian and U.S. society, but have reached a critical moment when the chorus must grow louder—you can add your voice by signing Solidarity Accord.