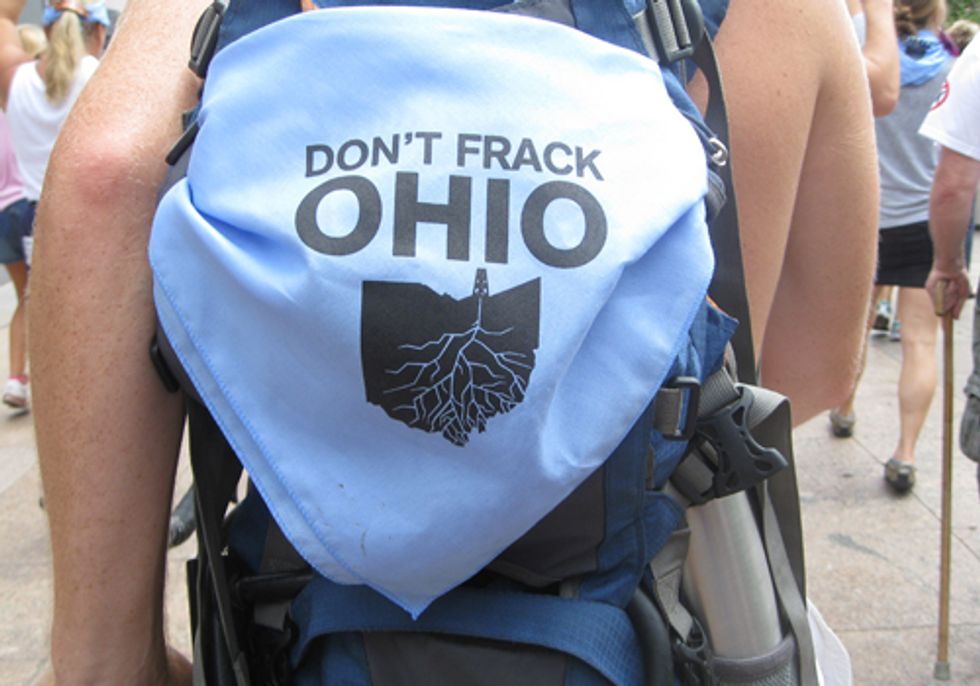 Athens County landowner Madeline ffitch (center) was arrested June 26 for blockading the Ginsburg Hazel well in protest of the ODNR’s failure to test brine. ffitch was one of several speakers at the Statehouse in Columbus today.

Results from a sample of brine from hydraulic fracturing operations have revealed numerous hazardous materials, leaving many residents increasingly frustrated at the inaction of Ohio’s Division of Natural Resources (ODNR), the agency responsible for regulation of the state’s shale development.

The lab results indicate high levels of alpha particles, arsenic, barium and toluene, among other contaminants, and are cause for the brine to be classified as “hazardous,” according to Ben Stout, professor of biology at Wheeling Jesuit University who interpreted the results. Stout labeled the results as “eerily similar” to brine samples taken by West Virginia’s Department of Environmental Protection. He describes heavy metals found in the sample as “grossly above standard,” citing skyrocketing arsenic and barium levels that exceed the primary standard for acceptable drinking water concentrations by 370 and 145 times, respectively.

Alpha particles indicate elevated levels of radioactivity and have been linked to lung cancer. High levels of barium are associated with organ failure, and both toluene and arsenic are highly carcinogenic. A partial review of ODNR inspection records on 116 injection wells from 2000-2011 reveals a legacy of brine spillage in at least twelve Ohio counties. In many cases, no remediation has occurred because the ODNR does not classify brine as hazardous waste.

“Ohioans have been asking ODNR to test the fracking wastewater coming into our state from Pennsylvania and West Virginia for a long time,” said Madeline ffitch, a 31-year-old landowner from Athens County who was arrested for blocking access to the Hazel-Ginsburg injection well on June 26. The Ginsburg well contains an open pit storage site from which the hazardous material analyzed by Professor Stout was obtained. ffitch recalls how a worker who oversees the Ginsburg injection well assured her that “just water” is stored in the pit. “ODNR is failing in their responsibility to this Ohio worker," ffitch said. “Why haven’t they tested this frack waste and made the results public?”

Upon reviewing Stout’s analysis of the brine sample earlier this week, Ohio State Rep. Bob Hagan (D-Youngstown) sent a letter to Gov. John Kasich and ODNR Director Jim Zehringer on June 27, stating, “I am writing to express serious concern that the safety and health of Ohio citizens is in jeopardy from the chemical contents of fracking wastewater ... When was the last time ODNR tested the make-up of brine and other fracking waste?” As of July 2, he has received no reply.

The ODNR has authority to order testing of brine before it is injected under section 1509.06 of the Ohio Revised Code. Rick Simmers, ODNR’s Oil & Gas Division chief, and other ODNR officials have received numerous written and oral requests from Ohio residents to order testing of brine, dating back to as early as Jan. 3. In an email dated Feb. 17, ODNR Records Coordinator Beth Wilson admitted that ODNR had "not completed any sampling on the out-of-district fluids injected to date." In response to a public records request filed in June asking ODNR to release all testing relevant to fracking brine, ODNR Geologist Tom Tomastik provided no test results taken after 1989, nearly two decades before Ohio began to accept massive quantities of waste from high volume hydraulic fracturing operations in Pennsylvania, West Virginia and as far away as Texas.

A recent scientific review by ProPublica entitled Injection Wells: The Poison Beneath Us, states: "Records from disparate corners of the United States show that wells drilled to bury this waste beneath the ground have repeatedly leaked, sending dangerous chemicals and waste gurgling to the surface or, on occasion, seeping into shallow aquifers that store a significant portion of the nation's drinking water."

Last week, New Jersey’s legislature banned the processing of fracking waste by a margin of 30-5, citing health and environmental concerns.

While neighboring states are taking steps to minimize brine injection, ODNR collects a fee of 20 cents on each barrel of brine injected from fracking operations out of state. Last year, 95 percent of Pennsylvania’s fracking brine was disposed of in Ohio. The injection program has secured the ODNR more than one million dollars in brine fees between last January and September 2011 alone, causing some residents to criticize this apparent conflict of interest.

“Keeping their jobs and creating new ones is totally dependent on keeping the waste flowing,” said Elisa Young, a resident of Athens, Ohio. “Refusing to analyze the waste when they have the authority to do it while allowing these out-of-state companies to dump unknown toxins in volumes of waste sufficient to induce earthquakes is tantamount to poisoning us for their paychecks."

ffitch added that Ohio residents taking action to test brine “are putting their health and safety at great risk to do the job that should rightfully fall to our state regulators. The burden should not be on residents to defend the legitimacy of work that the ODNR has failed to do all along. Anyone with doubt about the accuracy of these results needs to demand that ODNR immediately sample brine for independent testing.”

Speakers at today's press conference at the Statehouse included: