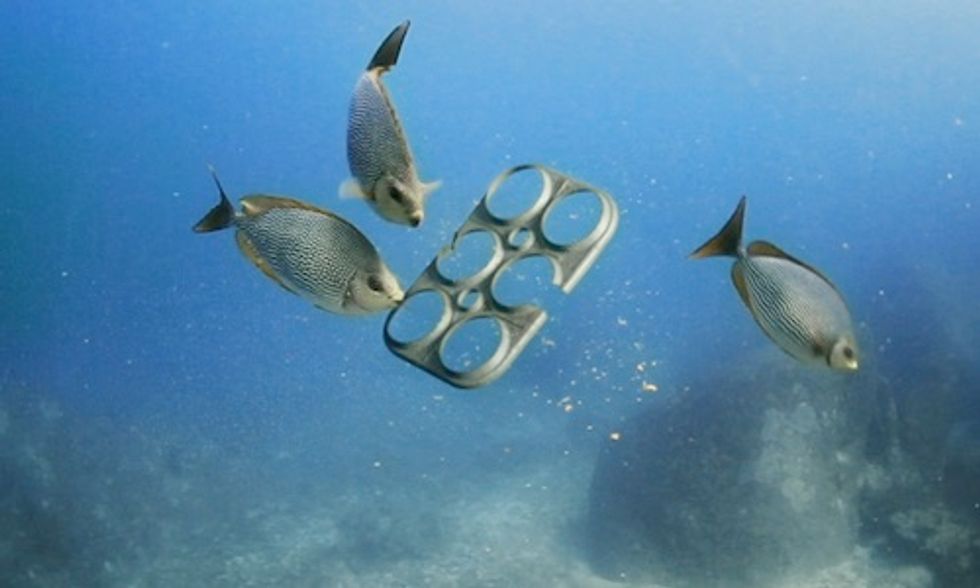 Drinking beer to save ocean life? Cheers to that. Saltwater Brewery in Florida has partnered with the New York-based ad agency We Believers to create a plastic-free six-pack ring that feeds marine life, rather than choking or ensnarling them.

Edible six-pack rings were created by fisherman, surfers and people who love the sea, according to Peter Agardy of Saltwater Brewery.

The Edible Six Pack Ring is made from byproducts of the brewing process such as wheat and barley, making it the first 100 percent biodegradable, compostable and edible packaging implemented in the beer industry.

Creativity reported that 3D-printers were used to manufacture the first batch of 500 edible and biodegradable six-pack rings for Saltwater Brewery's main brand IPA.

The plan is to produce 400,000 edible six-pack rings per month, enough for the current monthly production of Saltwater Brewery.

The rings are 100 percent biodegradable, made with byproducts of the beer making process such as barley or wheat.

The product, designed with a team of engineers at a small startup in Mexico, is as resistant and efficient as the current plastic six-pack ring option, according to We Believers co-founders Marco Vega and Gustavo Lauria.

The first mass-produced batch will cost between 10 and 15 cents per unit, for craft beer that costs more than $10 for a six-pack, Lauria said.

The developers admit that the price of their product is currently a downside. The hope is that if more brands or investors hop onboard the prices will fall.

“We hope to influence the big guys and hopefully inspire them to get on board,” said Saltwater Brewery president Chris Goves.

Americans drank 6.3 billion gallons of beer in 2015, with 50 percent of that volume sold in cans that often come in those pesky plastic rings. The material either ends up in landfills or in the ocean, and can end up in a bird's stomach or around a sea turtle's body.

Plastic trash and marine debris is a growing crisis in our oceans.

The six-pack ring problem is not as bad as it used to be—many of us already instinctually cut them apart before throwing them away. In fact, the Plastics Industry Trade Association calls it an environmental urban "myth" that six-pack rings are hazardous to wildlife, pointing to federal regulations that have required six-pack rings to be 100 percent photodegradable since 1989.

However, while it's true that these rings are designed to "photodegrade," or disintegrate into small pieces within 60 to 120 days, that's still plenty of time for a bird or turtle to get trapped in one or choke on a piece of it. Also, something that's "photodegradable" doesn't mean biodegradable, so no matter how small it breaks down it will always be plastic. You may have heard of our oceans' microplastic crisis, where massive clouds of microplastics are emanating out of the five subtropical gyres.

The plastics industry also says that the onus is on us to recycle the six-pack rings, saying "concerns about beverage binders and wildlife could be eliminated if humans would dispose of the rings properly." However, not all curbside recycling programs accept them and let's not forget that Americans, as a whole, are pretty terrible at recycling, with a 34.3 percent recycling rate.

Plastic pollution is devastating our ocean ecosystems, with 8 millions tons leaked into the oceans every year. The waste is routinely found inside the stomachs of many species of aquatic life, from the tiniest plankton to giant whales, and that's not the mention the dangerous, hormone-disrupting chemicals leaching from the plastics.

"If most craft breweries and big beer companies implement this technology, the manufacturing cost will drop and be very competitive compared with the current plastic solution, while saving hundreds of thousands of marine lives," Lauria said.

Watch the video to learn more.