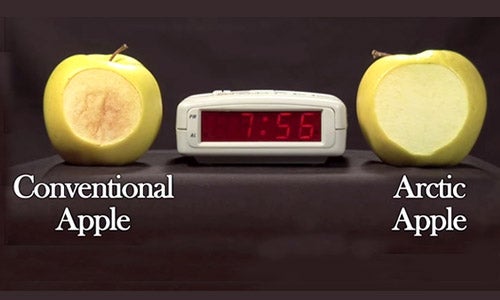 The first commercial crop of Arctic Apples—genetically modified (GMO) apples that won’t turn brown when sliced—are about to hit the market.

Visiting our Washington field trial today, and the Arctic Fujis are certainly a good-looking bunch this year! pic.twitter.com/VeE09TsJlq

The apples stirred up major controversy in February 2015 when the U.S. Department of Agriculture (USDA) deemed both the Arctic Golden Delicious and Arctic Granny varieties safe for human consumption. It was the first time the federal agency approved an aesthetically-improved genetically engineered food.

According to Good Fruit Grower, a publication from the Washington State Fruit Commission, after 20 years of development, Okanogan Specialty Fruits is expecting to harvest its first commercial crop of about 50 bins of Arctic Golden Delicious in Washington this year.

The Canadian company will also plant its first Arctic Granny Smiths this year and is awaiting approval from the USDA for a third variety, the Arctic Fuji. On Dec. 31, 2015, the company formally submitted a petition to the USDA requesting the deregulation of its GMO Fuji, and announced plans for its fourth variety, the Arctic Gala.

Neal Carter, company president and founder, told Good Fruit Grower that his company has planted roughly 15 acres of Goldens in Washington, which will yield a small crop this fall.

The blossoming venture plans to add more acreage mostly in Washington this year for its Arctic Golden and Arctic Granny varieties, with even more in other states and Canada in the following few years.

.@Fruits_Veggies A4: Apples! Harvest isn't 'til Sept, but we have nonbrowning dried slices in the meantime! pic.twitter.com/K0BrDpaxhX

Carter said that the first apples will be test marketed in select stores this year. As production ramps up, more apples will by distributed to locations in the U.S. and Canada. Carter declined to name which growers, packers or retailers will be working with Arctic Apples.

Good Fruit Grower reported that once regulatory agencies have approved the apple varieties, the company may promote its flagship product like any other apple you see in the market.

“What that approval means is it’s treated like any other apple variety,” Carter said.

The 1st Arctic apples of the season were picked last week! Looking good next to conventional, as always: pic.twitter.com/r2w71x5Acl

So why doesn’t an Arctic Apple turn brown? As NPR explained:

The non-browning trait was created by inserting extra copies of genes that the apple already possessed. These genes normally create an enzyme called polyphenol oxidase, which is responsible for the chemical reaction that causes browning.

Yet when extra copies of the gene are added, the apple reacts by shutting down all of them, stopping production of the enzyme and preventing the browning reaction. (Like any apple, these apples eventually will go brown from normal rotting. It’s the immediate “enzymatic browning” that’s blocked.)

However, Wenonah Hauter, the executive director of Food & Water Watch, warned that this method of genetic engineering, known as RNA interference, could have “unintended effects” to the apple and to the people who consume it:

This technology uses RNA to silence a target gene, but mounting evidence has shown that meddling with the genes could have unintended effects within the plant and also on organisms that eat the plant. The particular gene targeted by this technology allows the apples to be sliced without turning brown, which could mislead consumers into thinking they are eating fresh apples when they might be eating apples on the verge of rotting. Browning is an important indicator to consumers in determining the freshness of an apple or apple slice. The silenced gene is also heavily involved in a plant’s natural defense against pests and pathogens, which could lead to trees that are less healthy than non-GMO apples and rely on more chemical treatments to ward off pests and disease.

Environmental organizations and concerned consumers have also criticized the USDA’s stamp of approval. The USDA’s environmental review received 73,000 comments that vehemently opposed the commercialization of the apples. In an article, Friends of the Earth warned that people who buy the apples won’t even know they are eating it: “Like other genetically modified organisms, the Arctic apple will not be required to be labeled as genetically engineered.”

Following intense consumer backlash, a number of major food companies such as Wendy’s, McDonald’s and Gerber expressed that they had no plans to source or sell the GMO apple.

Okanogen Specialty Fruits is owned by Intrexon, which has a major stake in the similarly controversial GMO salmon company, AquaBounty.