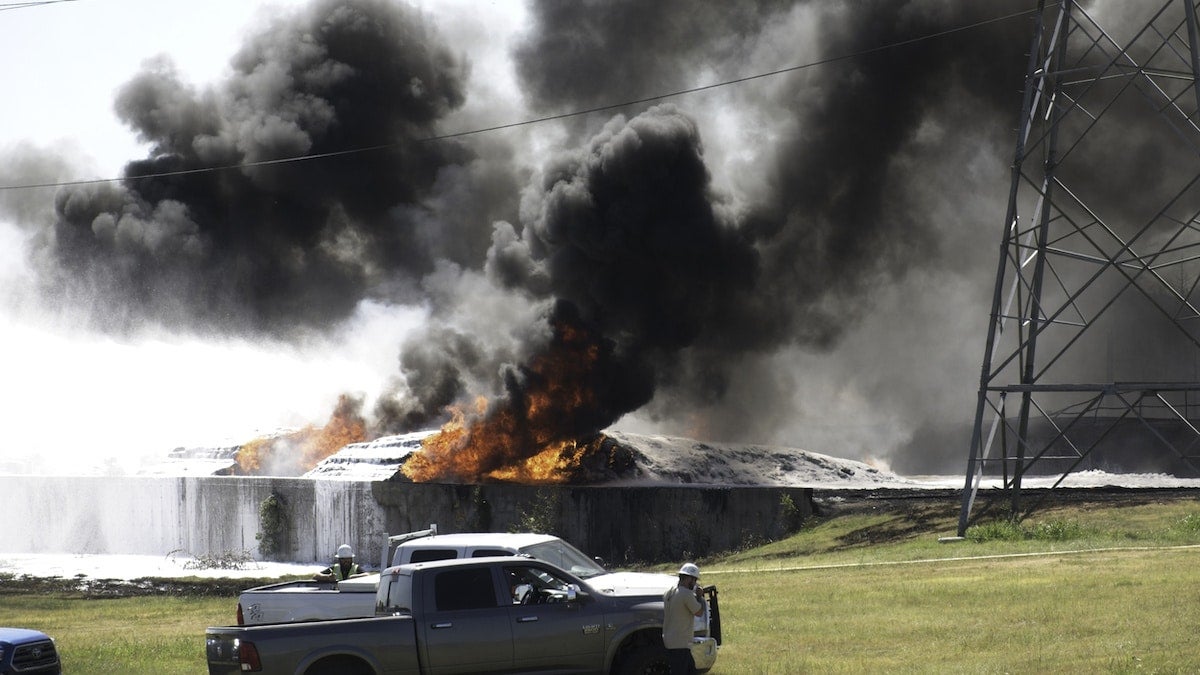 Fire and smoke at a plastics plant in Grand Prairie, Texas, on Aug. 19, 2020. The massive fire that broke out overnight is likely to burn for days, officials said. Xinhua / Dan Tian via Getty Images

The smoke could be seen for miles and was picked up on a weather camera in Denton, about 40 miles away, WFAA reported. No injuries were reported and no evacuations were ordered, but people with underlying medical conditions were warned to avoid the smoke and self-evacuate if needed.

“Anybody with any breathing problems, any asthmatics, I mean it is the combustion from plastic so it’s not good to breathe,” Grand Prairie Assistant Fire Chief Bill Murphy told CBS Dallas-Fort Worth.

The fire broke out at Poly-America factory in Grand Prairie, which manufactures polyethylene and petroleum-based products such as trash bags, drop cloths, plastic sheeting and vapor barrier film.

Firefighters think the blaze started when a powerline fell on an area where plastic rolls were being stored.

“All of their storage there at Poly-America, for their rolled plastic, is underneath those towers so it ignited the plastic rolls. It just spread to all the inventory that they have back there,” Murphy told CBS Dallas-Fort Worth.

Because of the nature of the plastic fuel, firefighters initially thought the fire would burn through Thursday, but they managed to contain it by 4 p.m. Wednesday, The Associated Press reported.

“Plastic is hard to put out and it’s just gonna burn,” Murphy said.

Another difficulty was train tracks that ran between the firefighters and the factory building, WFAA reported. One train car filled with paint caught fire.

“It was a solid wall of 15-foot flames all night long,” Murphy said.

The factory building itself was removed from the fire and not expected to be damaged.

The Texas Commission on Environmental Quality and Grand Prairie officials said they would continue to monitor air quality, The Associated Press reported.

“The State of Texas is monitoring the industrial fire in Grand Prairie and working closely with local officials and first responders to address safety concerns in the community,” Texas Gov. Greg Abbott said in a statement reported by WFAA. “The Texas Commission on Environmental Quality and Grand Prairie officials are continually checking air quality conditions and the State will provide any necessary resources to the area. I ask Texans in the Grand Prairie community to heed the guidance of local officials and pray for the safety of the first responders combating the fire.”

This isn’t the first time Poly-America has caught fire. Another blaze 32 years ago took a day to put out.

“This is a dramatic and frightening example of why we must reduce our dependence on toxic plastics,” Texas Campaign for the Environment senior strategy director Corey Troiani told Green Source DFW. “The plastics industry has targeted Texas to expand dangerous facilities like this one to produce more unsustainable single-use products. Incidents like this remind us that we must transition to a cleaner economy and protect our health and environment from plastics. Our hearts go out to the residents of Grand Prairie and neighboring cities who live near this fire.”