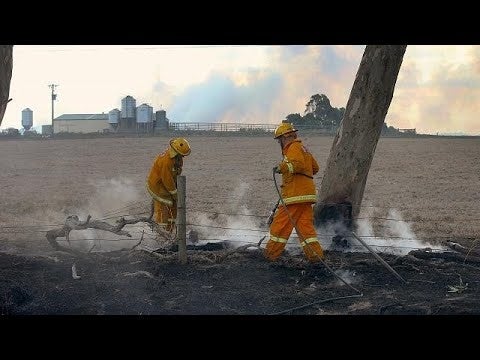 “March is not traditionally seen as a time when the bushfire danger escalates, but as the fires in Tartha NSW, and south west Victoria show, bushfires do not respect summer boundaries,” said Richard Thornton, the CEO of the Bushfire and Natural Hazards Cooperative Research Centre.

“When conditions are right, with high temperatures, low humidity and strong winds, bushfires will occur. We will see more fires outside of the traditional summer danger period as our climate changes,” Thornton added.

While firefighters and residents have saved many homes in #Tathra, a number have been destroyed. The exact number won't be known for some time when Building Impact Assessment teams can get into the area. The fire has burnt right to the coast under strong winds. #nswrfs #nswfires pic.twitter.com/CARce7Ok2m

Extreme fires have increased since the 1970s in eastern and southern Australia, with the fire season length extending from October to March.

David Bowman, a professor of environmental change biology at the University of Tasmania, said fire seasons are lengthening globally in response to global warming.

“Joining the dots, this is consistent with climate change,” he told the Australian Associated Press. “This is the new normal now—we need to get our heads around this.”

“This has some really significant implications for people living in flammable environments because it means you can’t put your guard down,” he continued. “You can’t think summer has ended and say, ‘Phew we dodged a bullet.'”

“Sadly, fires like this well into autumn are an increasing part of the southern Australian experience, as we move further towards climate disruption associated with continued increases in human-associated carbon dioxide (and equivalent) emissions,” said Grant Wardell-Johnson, president of the Australian Council of Environmental Dean and Directors.

“Given our weak efforts to reduce emissions globally—and especially in Australia, we will increasingly need to plan for catastrophic events and pick up the pieces following such events,” he noted. “A great start would be an acknowledgement of the seriousness of issues we face in climate disruption. A move from burying heads in the sand towards adaptation to climate disruption is well overdue.”

The fires in Victoria and New South Wales are believed to have been sparked by lightning.

Australia’s Prime Minister Malcolm Turnbull criticized those who have linked climate change to the blazes.

“You can’t attribute any particular event, whether it’s a flood or fire or a drought … to climate change. We are the land of droughts and flooding rains, we’re the land of bushfires,” Turnbull said at recent press conference at the fire-ravaged town of Tathra in New South Wales.

“Nature hurls her worst at Australians—it always has and always will. We have an environment which has extremes.”