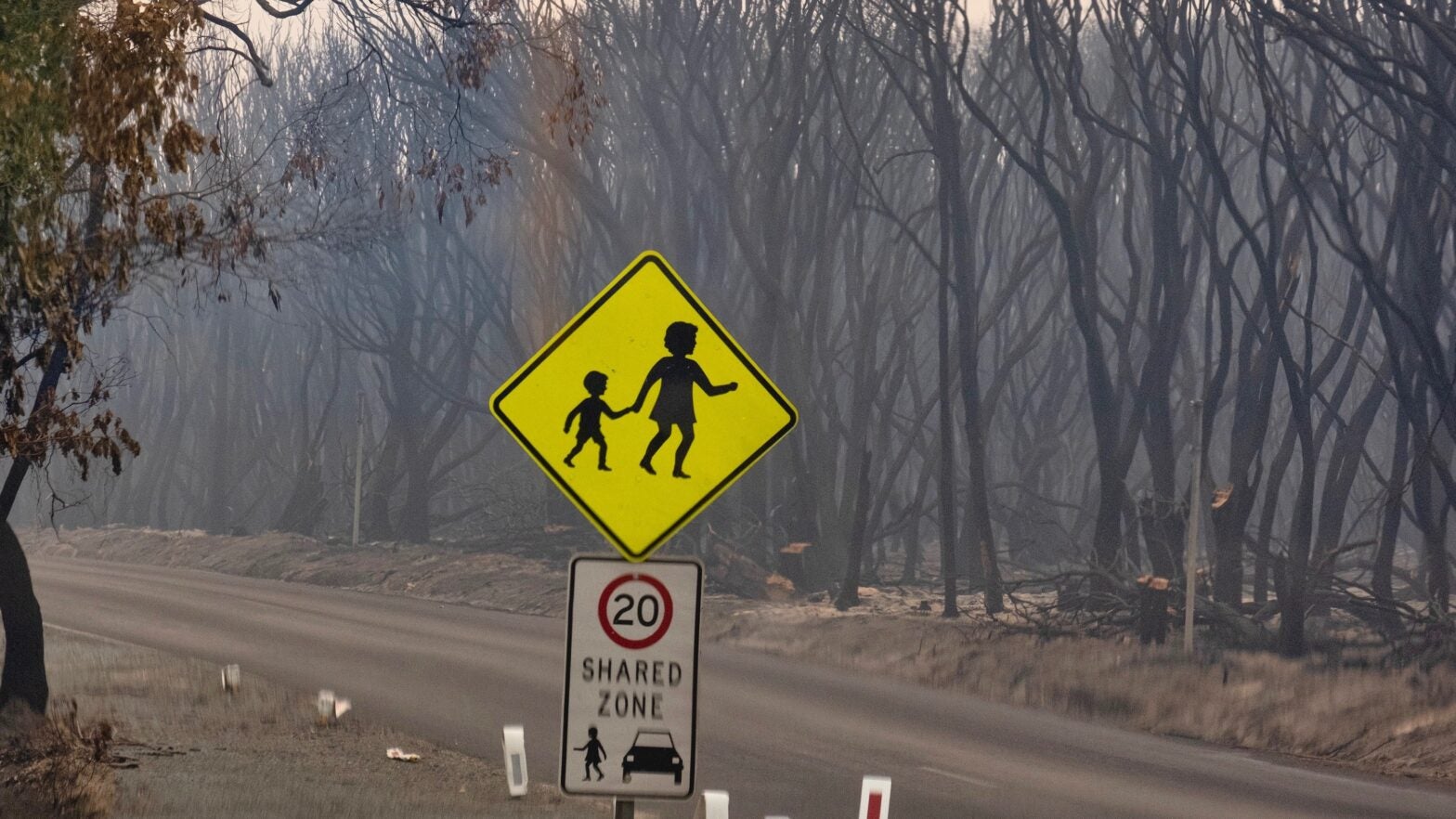 A children school sign crossing is seen in front of burned trees in Mallacoota, Australia on Jan. 15. A logging project west of this area has been temporarily stopped to assess the health of native species. Luis Ascui / Getty Images

The Australian Supreme Court has stepped in to put an immediate halt to a logging project in east Victoria while it waits for cases about the health of native species to be heard in court, according the Brisbane Times.

The state’s logging agency VicForests must immediately stop logging several areas that were earmarked for clear-cutting. Environmentalists had argued that that devastation from the fires in East Gippsland had put an inordinate amount of strain on native species in Victoria. They argued that areas that were left unscathed must not be logged while surviving animals try to find a new habitat, as the Australian Broadcasting Company reported.

Justice Kate McMillan said there was “a real threat of a serious or irreversible damage to threatened species and their habitat should harvesting operations continue in the coupes,” according to the Australian Broadcasting Company. “The recent bushfires have caused extensive environmental damage, the severity of which is only beginning to be understood.”

Wildlife of the Central Highlands filed the case against VicForests. It is looking to stop 10 areas that are scheduled for clear-cutting. The current injunction stops three of them from continuing. They will seek an injunction for the other seven forests when the issue is before a court again in a few weeks, as The Guardian reported.

Wildlife of the Central Highlands claimed the areas targeted for logging are habitat for the greater glider, the smoky mouse, the sooty owl, and the powerful owl — all have been identified by the Victorian government as being of immediate concern because of the bushfires, according to The Guardian. The plaintiffs say that logging the areas where these animals have been spotted is illegal until the government creates a plan to protect the wildlife.

Environmental Justice Australia, which represented Wildlife of the Central Highlands in court, told the justices that the animals had seen their habitats destroyed in the fires so the unscathed areas will now take on a larger role in conservation. Considering that, the trees should remain standing for the short term, according to the Brisbane Times.

Danya Jacobs, a senior lawyer with Environmental Justice Australia, said it was a good result for threatened species “who suffered a huge blow after the catastrophic bushfires,” as The Guardian reported. She added, “important unburnt habitat is now safe from logging, while this case moves to the next stage.”

“This case is an important test for whether laws designed to protect threatened species are able to do so in the aftermath of this summer’s catastrophic bushfires,” said Jacobs, as the Brisbane Times reported.

Victoria’s Premier, Daniel Andrews, said the fires destroyed 40 percent of the area in East Gippsland that had been slated for logging, as the Australian Broadcasting Company reported. In 2019, Andrews announced that logging in Victoria would be phased out by 2030 because of dwindling sustainable supplies.

“I don’t think we yet know exactly what the impact is on the current timber release plan or our timber transition plan in terms of whether the volumes we thought would be available will be,” said Andrews, as the Australian Broadcasting Company reported.”There has been impact from these fires, and we will have to assess what that impact is.”