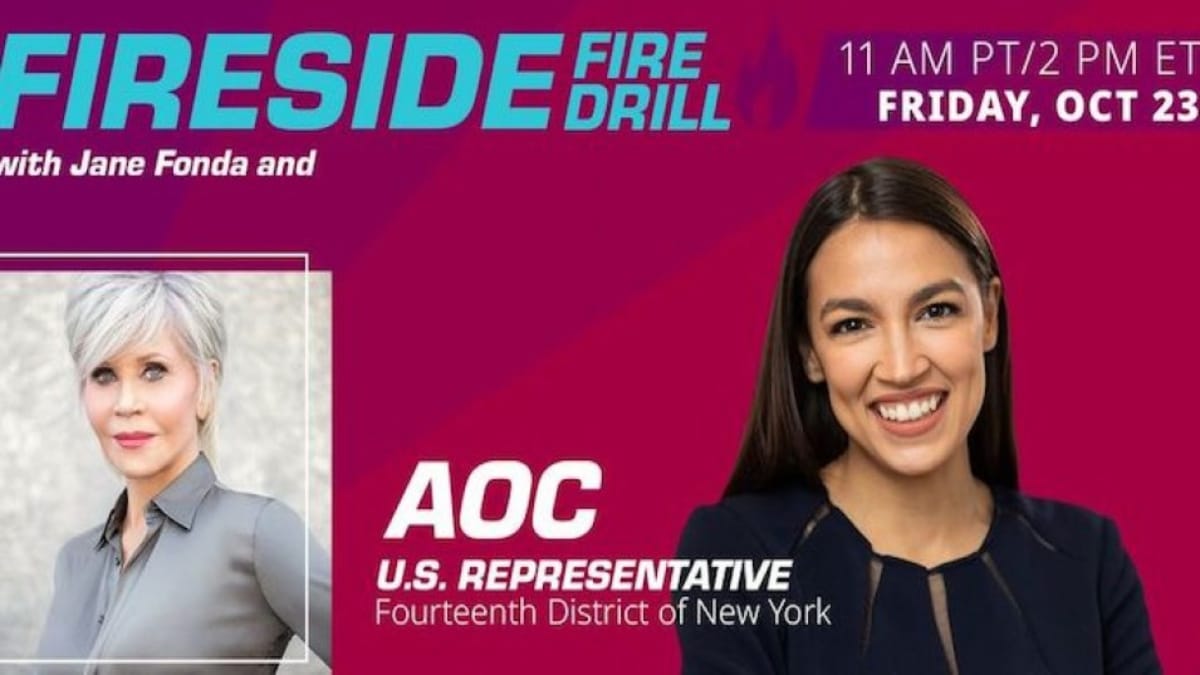 Rep. Alexandria Ocasio-Cortez on Friday will be the latest “fireside” chat guest to join actor and activist Jane Fonda, whose Fire Drill Fridays campaign—which has resulted in the arrests of fellow notable actors—has boosted demands for urgent action to rein in the climate emergency.

The team behind Friday Drill Fridays sent an email to supporters on Thursday promoting the conversation, describing the New York Democrat as “clearly prepared to fight for and stand with working people no matter what” and saying she’d provide “insightful perspective” during the chat.

“This is one of our most important calls in the lead-up to Election Day, and we want to come out on the other side of November 3 celebrating—and with no regrets,” the email, signed by Fonda and the Fire Drill Fridays team at Greenpeace, said. “We know this election is absolutely critical for the political fight ahead for a Green New Deal and just recovery from Covid-19, and we’re ready to fight for this win.”

🔥FRIDAY🔥 @JaneFonda, @GreenpeaceUSA, and @FireDrillFriday are thrilled to be joined by Rep. @AOC for a critical conversation about early voting, the Green New Deal, and real climate leadership!

The conversation is scheduled to take place Friday, October 23 at 2 pm ET.

Eighty-two year old Fonda, a longtime environmentalist and veteran activist, kicked off Fire Drill Fridays in October last year with a focus on three demands: a Green New Deal, an end to fossil fuels, and a just transition to a renewable energy-based economy.

The weekly campaign featured Thursday night teach-ins—each with a different climate focus and speaker or speakers—ahead of Friday rallies and protests on the steps of the Capitol building in Washington, D.C.—a place organizers framed as “the epicenter of the fight for our climate.” The acts of civil disobedience resulted in multiple arrests, including of Fonda herself and her “Frankie and Grace” co-star Lily Tomlin.

Now forced to a largely digital format in light of the coronavirus pandemic, Fire Drill Fridays has kept up the momentum, with recent fireside Fire Drill guests including Juan Parras, founder and director of TEJAS, and youth climate leader Jamie Margolin, also founder and co-executive director of Zero Hour.

Fonda is also out with a new memoir, What Can I Do?: My Path from Climate Despair to Action.