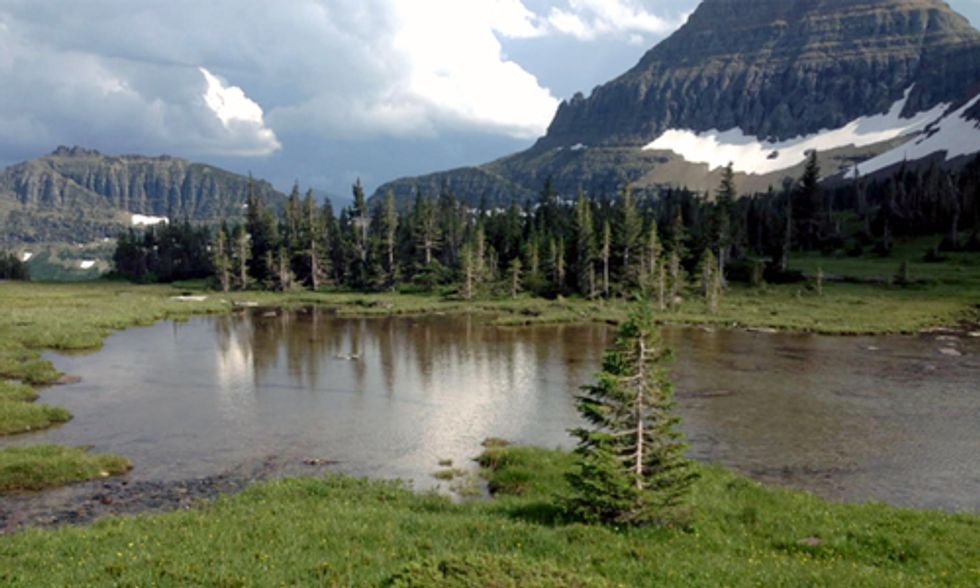 I did my best to get away from work last week while my family and I were on vacation visiting friends who live in Kalispell, the gateway to Montana’s Glacier National Park. But it wasn’t quite possible. You see, I’m a climate scientist. And the spectre of climate change stares you in the face as you tour the park.

The once great mountain glaciers in Montana’s Glacier National Park that gave the park its name have retreated dramatically in recent decades. Photo credit: Michael Mann

The once great mountain glaciers that gave the park its name have retreated dramatically in recent decades. Of the roughly 150 glaciers that existed in the park when it was established in 1910, only 25 remain today. You can’t help but notice their tenuous appearance as you approach the continental divide heading up Going-to-the-Sun road toward Logan Pass, and as you hike the nearby trails watching Pika nervously scurry about as if they somehow sense a looming threat. Climate model projections indicate that Glacier National Park might lose all of its glaciers by 2030 as human-caused global warming proceeds. Perhaps it will be renamed “The Park formerly known as Glacier.”

Goodbye to Glaciers: Of the roughly 150 glaciers that existed in the park when it was established in 1910, only 25 remain today. Photo credit: Michael Mann

But that’s just one of climate change impacts you see and feel. As you enter the park, you’re warned that the current fire threat is “high.” Fuel load is at peak levels due to pine forests weakened by warmth-loving pests such as “Pine Bark Beetle” that have moved as far north as northern Montana in recent years. The high fuel load has combined with extreme heat and drought in recent years to pose a wildfire triple threat, a threat that can be linked to climate change.

There were no active wildfires in the park that I was aware of during my visit. But according to The Hill, there are roughly 30 major wildfires raging across three West Coast states with California battling over a dozen large fires during the worst drought in the state's history, forcing Gov. Jerry Brown to declare a state of emergency last weekend. The smoke plume from the west coast wildfires is so massive that smoke is being transported all the way to Montana. This smoke was visible as we explored Glacier National Park, obscuring our view of some of the more distant peaks. Another reminder, as if we needed one, that climate change is already having a very intimate impact on our world.

Almost as if to comment on my experience, the White House released a video yesterday linking America's increasingly more frequent and widespread wildfires to climate change.

“Climate change has been making the fire season in the U.S. longer and on average more intense,” President Obama's Science Advisor Dr. John Holdren says in the video. He explains that wildfires have “increased several-fold in the last decade” and the eight worst years on record for “area burned” by wildfires “have all occurred since 2000.”

"The influence of climate change on the wildfire regime comes not just from the higher summer temperatures and reduced summer soil moisture that go with global warming, but climate change is also bringing us more dead trees—kindling in effect—killed by a combination of heat stress, water stress and attacks by pests and pathogens that multiply faster in a warmer world," Holdren added.

He warns, "Longer, hotter, dryer summers are projected to continue to increase the frequency and intensity of large wildfires in the United States."