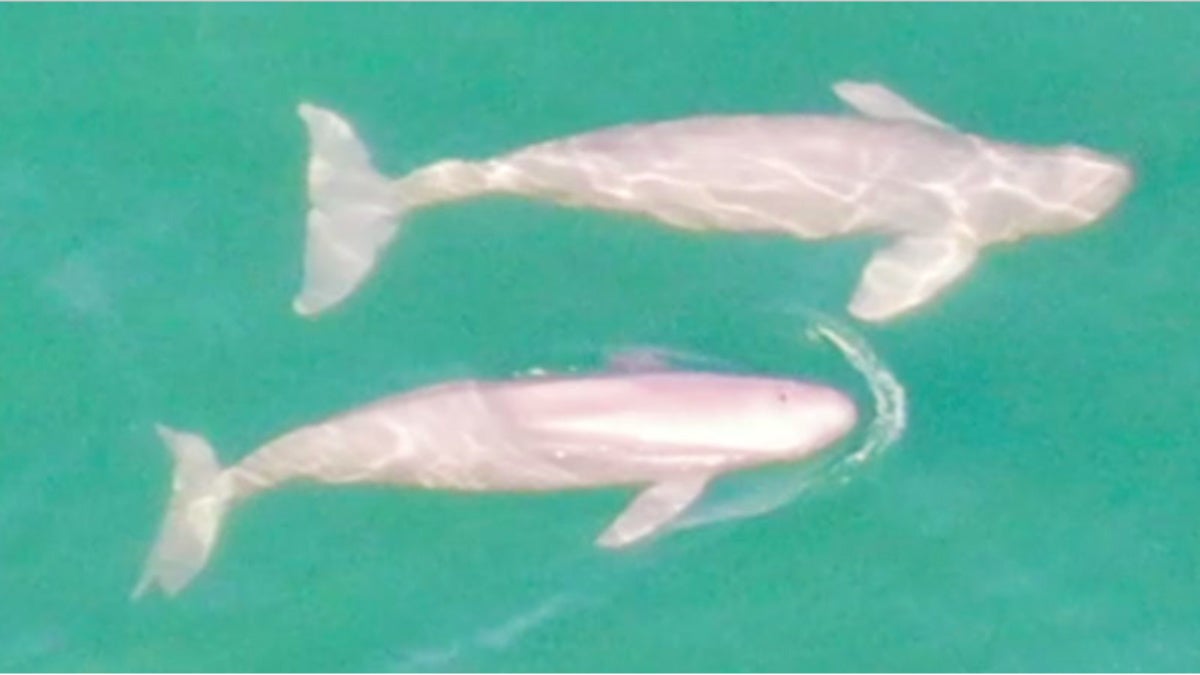 Two silvery-white porpoises glide through the ocean, captured in the lens of a drone camera. The pair swim side by side, occasionally surfacing for a quick breath of air. After a few minutes, they’re joined by several other porpoises, and the group travels together before disappearing into deeper waters.

Rare footage of the finless porpoise of Hong Kong released

“I made it my personal holy grail to get footage of these porpoise as they are so hard to document and no one has anything decent,” Stokes told Mongabay. “Everyone I spoke with working on them in Hong Kong has little to no images. The best pictures resemble a ‘floating tire,’ which is as best as you can really get if you are really lucky.”

But Stokes said he got extremely lucky when he went out on his boat to search for them off the coast of South Lantau Island on May 2. “At one point I had 9 to 10 animals, which is said to be about as large a pod as they get, and very uncommon in Hong Kong,” he said.

The finless porpoise is a small, bathtub-sized creature with a distinctive attribute: unlike many other cetaceans, it only has a small dorsal ridge on its back, rather than a proper dorsal fin. This trait gives the finless porpoise its name, and makes it very difficult to detect in the water.

A pair of finless porpoises off the coast of Hong Kong. Gary Stokes / OceansAsia

But there aren’t many finless porpoises left in Hong Kong waters. In 2002, a group of researchers published a report that estimated there to be about 152 finless porpoises in the springtime, Hong Kong’s peak season, and a total of 220 porpoises year round. A more recent report, published by the Agriculture, Fisheries and Conservation Department (AFCD) in Hong Kong, said there was a total of 269 finless porpoises in Hong Kong waters between 2018 and 2019, a slightly higher number. Thomas Jefferson, an author of the 2002 report, told Mongabay that he and a team of researchers would also be publishing a new report in a scientific journal later this year, estimating there to be 176 porpoises during the spring of 2019, which was “a very slight increase” from previous estimates.

The population may have risen moderately, but Teale Phelps Bondaroff, director of research at OceansAsia, says there are still serious concerns about the finless porpoise in Hong Kong based on the number of strandings, which seem to be increasing each year. In the last 14 years, at least 319 finless porpoises were stranded, according to data collected by the AFCD and Ocean Park Conservation Foundation Hong Kong (OPCFHK), which was published in a new report by OceansAsia. Last year is thought to be the deadliest year for the species, with 42 officially recorded strandings, although the report notes that at least one or two additional strandings weren’t officially recorded. In 2020, there have already been 15 strandings as of May 16, according to OceansAsia.

“It’s really alarming,” Phelps Bondaroff, author of the new report, told Mongabay. “Biologists will say that if the annual mortality for a species is between 4 to 5%, that’s unsustainable. Well, 42 or 43 porpoise is definitely much more than four to five percent of 220.”

But these strandings are just the ones that are reported. Finless porpoises are frequently trapped and killed in fishing nets as bycatch, and fishermen may not disclose these casualties to the authorities, Phelps Bondaroff said.

“The law basically says that it’s illegal to be in possession of a protected animal … and these porpoises are protected animals in Hong Kong,” he said. “But the problem is that if you accidentally get one entangled in your net, you have the burden to prove that you didn’t intentionally catch it. And that’s very difficult for fishers to do. It’s a lot of paperwork, there’s bureaucracy involved, and it’s sometimes, much easier to simply dump the porpoise over and continue on.”

Besides fishing net entanglement, finless porpoises are also threatened by ship strikes, noise pollution, and plastic pollution. However, when a porpoise is found stranded, the cause of death isn’t always clear based on the necropsies conducted by the OPCFHK, Phelps Bondaroff said.

“Not all necropsies are as detailed as they could be,” he said. “Some of them are comprehensive with a CT scan … but others are cursory and done in the field, and the problem is that you don’t have consistent data.”

OceansAsia makes several recommendations in its report to help conserve the species. First, it suggests that another comprehensive finless porpoise survey be conducted, which will help determine how vulnerable the population is. Second, it proposes making the southwest coast of Lamma Island in Hong Kong, which is prime habitat for finless porpoises, a marine park. Third, it recommends a better system for stranding reporting and comprehensive analysis, a fisheries observation program, and a revision of the Wild Animals Protection Ordinance so fishermen are more likely to report accidental strandings.

The finless porpoise doesn’t just live in the coastal waters of Hong Kong, but ranges across Southeast Asia, India, and even the Middle East. Like Hong Kong, some local populations are evaluated to be quite low. For instance, one study estimates that about 135 finless porpoises live off the coast of Sarawak, Malaysia. However, John Wang, co-author of the Red List assessments for the IUCN, says that other areas may boast “pretty decent densities [of the finless purpose] relative to other species.”

“Most of the time, the ‘rareness’ is a misconception because most people won’t see finless porpoises even if they swim right by them,” Wang told Mongabay in an email. “So, no doubt they are dying in probably high numbers wherever gillnet fishing also occur, they are also probably reproducing quite quickly (being a porpoise) but we have no idea how many there are out there.”

The finless porpoise is currently listed as vulnerable by the IUCN, which means the species faces a high threat of extinction but is not considered endangered. Yet, there would be variances across the species’ distribution, according to Randall Reeves, who also acts as chair of the IUCN Species Survival Commission’s Cetacean Specialist Group.

“[I]t’s important to bear in mind that an assessment of the species, and especially when the species’ distribution is as extensive (and under-surveyed) as is the case for Neophocaena phocaenoides, must not be interpreted to mean that some, even many, local populations are not Endangered, Critically Endangered, or even Extirpated,” Reeves told Mongabay in an email. “In fact, we tried to make this point explicitly in the Justification portion of the assessment.”

CORRECTION (06/09/2020): A previous version of this article stated that John Wang was a co-chair of the IUCN Species Survival Commission’s Cetacean Specialist Group, but this was corrected to say that he is a co-author of the Red List assessments for the IUCN.