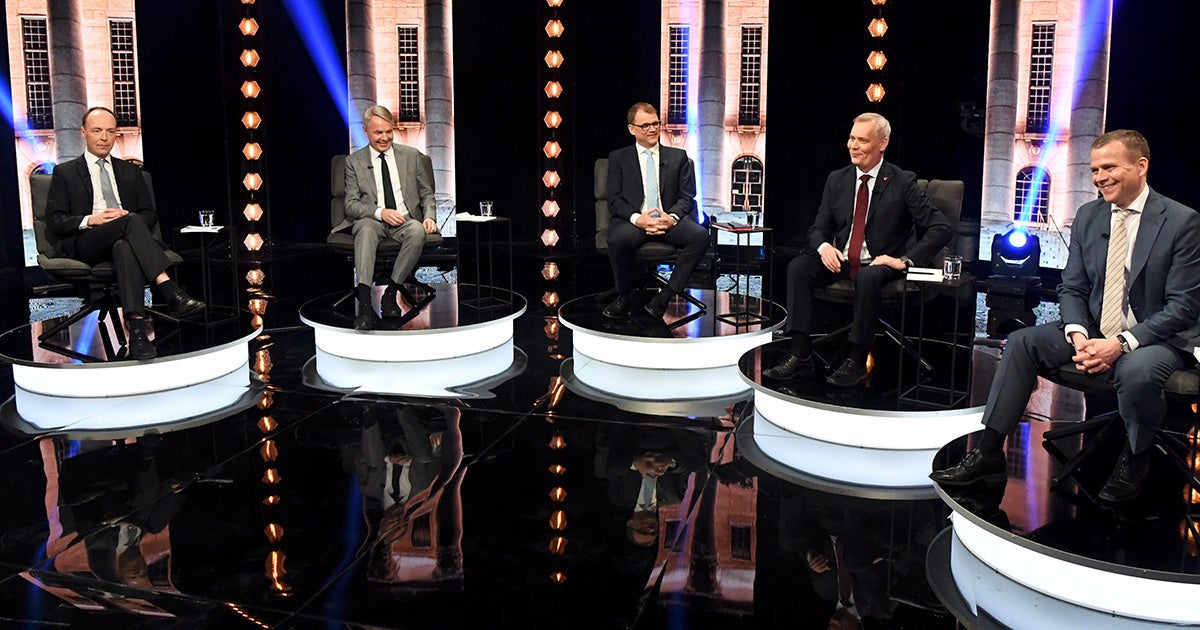 A televised debate ahead of Finland's general election, which took place Sunday; the leader of the winning Social Democratic party Antti Rinne is second from the right, and the leader of the second-place-winning Finns Party Jussi Halla-aho is first on the left. JUSSI NUKARI / AFP / Getty Images

The center left Social Democrats secured a narrow victory Sunday in a Finnish election dominated by the question of climate change.

In Finland, one-third of which sits above the Arctic Circle, most parties campaigned on taking greater climate action, while the nationalist Finns party argued against climate policy that it said required sacrifices from the populace.

“Never before has climate and the limits of planet Earth been discussed with such seriousness in Finland,” Greenpeace Finland said, as the Associated Press reported. The group called it “the climate election.”

However, that climate focus could have helped the Finns Party come in a close second, some analysts said.

“Well-meaning people wanted to make these elections climate elections, but they only set the table for an election victory for the Finns Party,” Helsingin Sanomat columnist Saska Saarikoski tweeted ahead of the election, as The New York Times reported. “Could we learn something from this?”

In the final tally, the winning Social Democrats took 17.7 percent of the votes, while the Finns Party won 17.5 percent. The center-right National Coalition won 17 percent and the current Prime Minister’s Centre Party took 13.8 percent, making this the first Finnish general election in one-hundred years in which no party has claimed more than 20 percent of the vote, Reuters reported.

During the election, eight of the nine parties offered plans to keep global warming to 1.5 degrees Celsius above pre-industrial levels, such as taxing meat or airfare or limiting logging. The Finns Party, meanwhile, presented these proposals as sacrifices imposed on ordinary voters by an urban elite.

“Climate hysteria wrecks the Finnish economy and industry, and it destroys the fruits of decades of work by citizens,” Finns Party chairman Jussi Halla-aho said in a video blog reported by The New York Times.

“They use identity-laden frames, such as national independence, the homeland, our nature and environment,” Schaller said. “They make it an emotional issue by fueling fears of rising energy prices and higher consumer costs. The way they communicate about this is dramatic and personal.”

However, many other voters in Finland want more ambitious climate policy.

“For everybody, it’s about the climate. It’s kind of a climate election. Everybody’s feeling some kind of a depression about it,” Helsinki interior architect Sofia Frantsi, 27, said, according to the Associated Press.

Young people have been inspired by protests led by Swedish teenager Greta Thunberg. University of Helsinki political science lecturer Tuomas Yla-Anttila said only a minority were swayed by Finn’s positions, though that minority could still make a difference given that the vote was divided between nine parties, according to The New York Times.

Despite the nationalists’ close second, it is Social Democratic Party Chairman Antti Rinne who will have the first chance to form a government, which means he could be the first left-wing prime minister in the country since 2003, CNN reported.

“For the first time since 1999 we are the largest party in Finland,” he told supporters in Helsinki, according to Reuters.