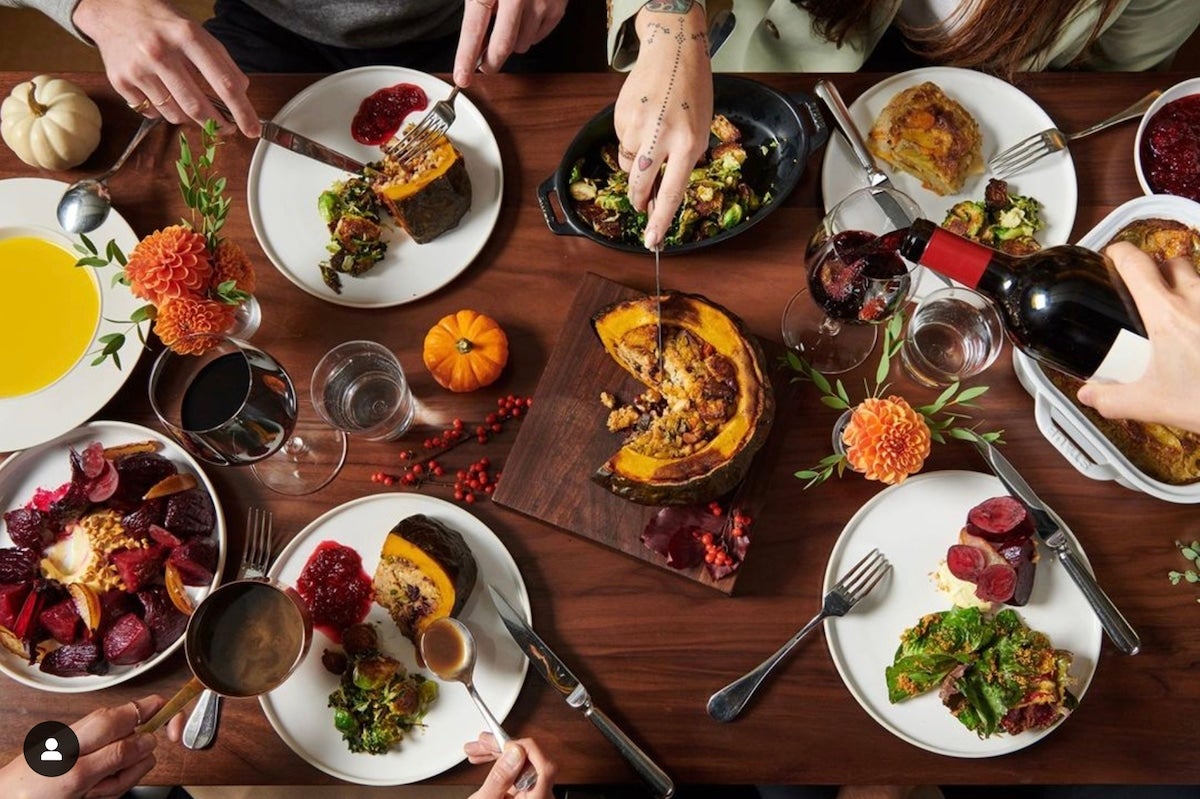 The upscale restaurant and fine-dining scene is undergoing a major change.

Over the past several years, a wave of well-known, upscale restaurants have announced transitions to plant-based menus. Many vegan and vegetarian restaurants — like Pietro Leemann’s Joia in Milan Italy, the first vegetarian restaurant to earn a Michelin star in Europe, or King’s Joy in Beijing, awarded three stars and the Michelin Green Star for gastronomy and sustainability — have boasted plant-based menus for years, but some big names are beginning to reckon with the environment impact of the animal products that dominate the industry and our plates.

In 2021, New York City’s Eleven Madison Park — which ranked number one on the World’s 50 Best Restaurants list in 2017 — announced that their menu would be going entirely plant-based, shocking the fine-dining world.

After COVID-19 shut the restaurant’s doors in 2020, Chef Daniel Humm redesigned the entire menu of the well-regarded, decades-old institution. The popular honey lavender duck and maple syrup-soaked foie gras were replaced by summer squash with marinated tofu, and eggplant paired with tomato and coriander. “It became very clear to me that our idea of what luxury is had to change,” Humm told The New York Times shortly after announcing his decision in 2021. “We couldn’t go back to doing what we did before.”

While many critics balked at the $335 price tag on a meal without meat — and the miso-glazed sunflower butter beside their bread — Humm made a case for these alternative dishes. “We celebrate caviar as a luxury ingredient,” he said at the 50 Best award ceremony last year. “But there’s nothing luxurious about caviar any more. It’s the opposite. It’s farm-raised, it’s flown in from far, it’s not rare at all, and it doesn’t taste good like it once did. It’s an old idea we’re holding on to.”

Land animals are off the menu at Atelier Crenn. In 2017, Chef Dominique Crenn announced that the upscale San Francisco restaurant would no longer be serving meat — and, two years later, all restaurants in the Crenn Dining Group followed suit. Diners can still enjoy seafood at Atelier Crenn, sourced from local, sustainable fisheries.

Crenn cited the climate crisis as a major influence on her decision. “Meat is insanely complicated — both within the food system and the environment as a whole — and, honestly, it felt easier to just remove it from the menus all together,” she announced in a statement. “Local and sustainable fish and vegetables are just as, if not more, versatile — and delicious.” After the restaurant’s award of three Michelin stars in 2019 and a Michelin Green Star for sustainable gastronomy in 2020, Crenn proved that plant-based eating has a place in the fine-dining world.

In partnership with UPSIDE Foods, Atelier Crenn is preparing for another new menu item too. The UPSIDE uses small amounts of animal muscle cells to grow chicken in a bioreactor, and diners will soon be able to enjoy their lab-grown chicken in the restaurant.

ONA has been serving exclusively vegan fare since they opened their doors in 2016 in Arès, France, but their recent award of a Michelin star — the first ever given to a vegan restaurant in France — has elevated this plant-based restaurant to the top of the fine dining scene. They also received a Michelin Green Star for their commitment to sustainability.

Chef Claire Vallée of ONA — which stands for “Origine Non-Animale” — wants to reshape how people view fine dining, especially in France, where meat still dominates the culinary scene. Her unique dishes have included combinations of boletus mushrooms and sake, fir, and tonka, and all ingredients are seasonal, organic, and often grown within close range of the restaurant. Even the furnishings are vegan: no fur or leather in sight.

“I trained in restaurants as a chef where meat and fish had to be predominant in the dishes,” said Vallée. “I had some opportunities to create vegan dishes but not enough and that’s why I created ONA, to express myself fully in what I had to say.”

ONA is temporarily closed due to the COVID-19 pandemic.

Ranked #2 on the World’s 50 Best Restaurants list, Copenhagen-based Geranium announced in 2021 that they would no longer serve meat from land animals. Instead, the restaurant began focusing on local seafood and vegetables grown on organic and biodynamic farms in Denmark and Scandinavia. Forest mushrooms with beer and smoked egg yolk, and butter beans with toasted pumpkin seeds have replaced typical meat dishes.

Chef Rasmus Kofoed has eaten a plant-based diet at home for five years, so he says the transition was a natural next step for the restaurant. “My kitchen at Geranium has long been focused on vegetables, fish and shellfish as the star on the plate, with small quantities of meat,” he said in an Instagram post. “The menu is a reflection of me, of who I am and how I am evolving as a chef and as a human being. I haven’t been eating meat for the last five years at home, so to no longer use meat on the new menu was a logical decision and a natural progression for Geranium.”

Founded in London in 2010, Gauthier Soho has taken a surprising shift away from classic, popular dishes like foie gras — of which the restaurant once sold 20kg a week —  to plant-based inventions. Gauthier told Business Insider that he used the restaurant’s closure during the pandemic to redesign the menu and transition to exclusively plant-based foods, adding dishes like Golden Fennel Boulangere, Summer Truffle Tortellini, and caviar made with kelp. He emphasizes that, while getting creative with his menu, he’s still “remaining 100% French, the flavors, all the tralala you think about when you go to a French restaurant.” Half of the menu is devoted to vegan versions of traditional French foods — like the infamous foie gras — and the other half features more experimental dishes.