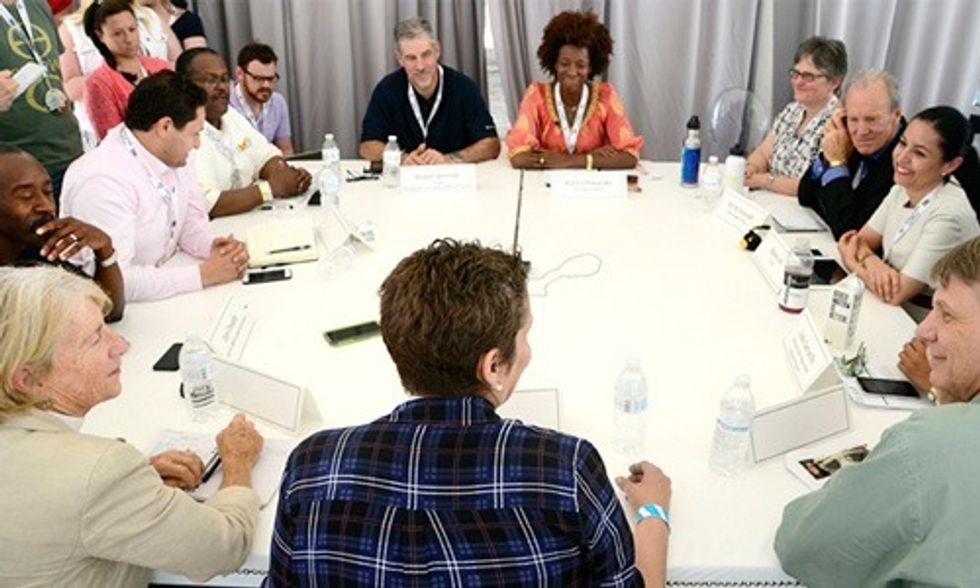 During the Global Citizen 2015 Earth Day event on the Washington Monument Grounds in Washington, DC on Saturday, Connect4Climate and Earth Day Network organized a roundtable to engage world leaders and influencers in a candid conversation on climate communication. The discussion provided new approaches to messaging and framing climate science and solutions to increase awareness and catalyze action on climate change.

The roundtable brought together a diverse group of business and nonprofit leaders, including:

The roundtable discussed the following questions:

Lydia Camarillo of Southwest Voter Registration Education Project began the conversation talking about how their efforts have registered more than 2.6 million Latinos. But about 15 years ago her organization realized they can't just fight for civil rights but also need to fight for our planet and make sure Latinos understand the impacts that climate change has on their communities.

She said, "What difference does it make if we fight to have an empowered community if we don't have a planet."

In the discussion on crafting the climate change message, Connect4Climate's Lucia Grenna said, "The greatest revolution of social media is not that we can communicate to millions of people, but rather millions of people can communicate to us. We hear stories from around the world and understand that climate change is not a scientific issue, it's very very real and it's about walking two extra hours to get water in Somalia or the floods in Bangladesh or drought in Sub-Saharan Africa."

Rev. Bingham of The Regeneration Project shared her thoughts. "Every social movement in this country has had the backing and the foundation of religious leaders ... We have people within the faith community that are calling climate change a civil rights movement, that it is the next civil rights movement that everybody is entitled to clean air and clean water."

Don Cheadle, an award-winning actor who participated in many of the days activities, visited the Alcantara Magic Garden-Connect4Climate pavilion, which was powered 100 percent by solar energy thanks to Building Energy. It was the first solar array ever installed on DC's National Mall.

"I think we are all in agreement that what we are dealing with is real and we need to make moves to address it," said Cheadle during the roundtable. "But if we can't bring everyone under the big tent, if we can't find ways to get the message out to those who are not in our camp, I think we're losing, we're missing. I'm interested in all the issues, but really I'm interested in how to communicate those issues more effectively. When we start to drill down and get out of policy and start getting into people, we start getting more nodding heads instead of folded arms."