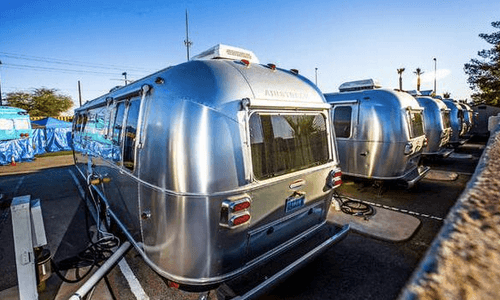 Tony Hsieh is proof that bigger isn’t always better. The CEO of online shoe company Zappos lives the simple life in a Las Vegas trailer park with his pet chickens and an alpaca named Marley.

Despite a reported net worth of $820 million, he calls a 240 square foot Airstream trailer home.

“It’s definitely a unique experience,” he told Las Vegas Weekly about his small space. “It allows me to be more creative, in a way, because it helps me concentrate on what’s important.”

Even though he could pick from any number of shoes on his website, Hsieh only owns four pairs: flip-flops, slippers for the home and a pair of Donald Pliner’s for when he’s not wearing sneakers, he told ABC News.

Sure, he lives in a trailer park but one wouldn’t say that Hsieh’s living standards are all too shabby. According to Las Vegas Weekly, the Airstreams (which retail for around $48,000) are tricked out with wood paneling, stainless-steel appliances, a Bluetooth stereo and two TVs.

Hsieh also owns the entire East Fremont lot he lives in, which is home to 20 other Airstream trailers and 10 tiny Tumbleweed houses for friends, family, colleagues and visitors. Rent goes for about $950 a month.

Tony Hsieh has $820 mil net worth but lives in an #Airstream in a trailer park w/ an alpaca! http://t.co/1bPFyg1BHx pic.twitter.com/iji5A7XsXl

The tiny living community, affectionately known as Llamalopolis, was designed to foster “communal nature and randomness” and was inspired by the Burning Man festival, according to Las Vegas Weekly. There’s a bonfire and a movie projected on a blow-up screen every night, as well as a shared kitchen, living room and other common areas to encourage interactions.