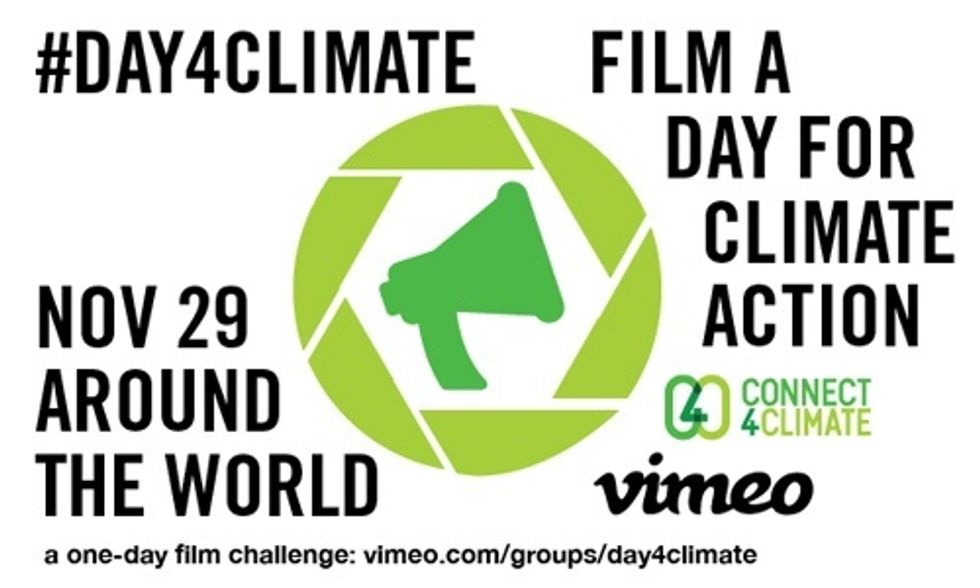 Connect4Climate, the global partnership program of the World Bank Group, the online platform Vimeo and partners have joined forces to challenge citizens around the world to film Climate Action on one day, Nov. 29.

Dedicated to driving climate action around the world, the 24-hour Film a #Day4Climate Action challenge asks aspiring filmmakers and citizens worldwide to document climate actions, solutions and conversations happening on a day dedicated to global climate mobilization. On Nov. 29, a day before the UN Framework Convention on Climate Change (UNFCCC) COP21 meeting starts in Paris with a gathering of global leaders, citizens all around the world will get out and call for an ambitious outcome in Paris. The 21st Conference of the Parties of the UNFCCC is expected to adopt a binding agreement on the long-term reduction of greenhouse gas emissions.

As part of Connect4Climate’s Film4Climate Initiative, Film a #Day4Climate Action invites people globally to share their story from Nov. 29 on what we should do to prevent dangerous climate change and save our planet. The stories all need to be filmed and edited down to no more than three minutes in 24 hour and submitted on the Vimeo’s group channel: Film a #Day4Climate Action—November 29, by the next day.

Submitted video messages will be featured during the Youth Day at COP21 and at events across the city. The videos will also be brought together in a documentary telling the story of how citizens around the world showed their support for climate action. A highly celebrated editor and filmmaker will lead this effort and the outcome will be then launched at the World Bank Group in 2016.

“Telling stories in a way which allows others to experience a world, which they never would have otherwise seen, changes people," said Lucia Grenna, program manager at Connect4Climate. "It has the power to change their perspectives, opinions and hearts. This is why film is such a powerful tool to encourage climate action.”

Just one day before the crucial climate negotiations in Paris begin, coinciding with the Global Climate March—a decisive call for bold actions on climate change—this challenge represents an opportunity for people to come together through the power of video and share their messages, pledges and solutions for climate change. Everyone, everywhere, united to build a resilient clean future!