Fighting the Legacy of Enrico Fermi 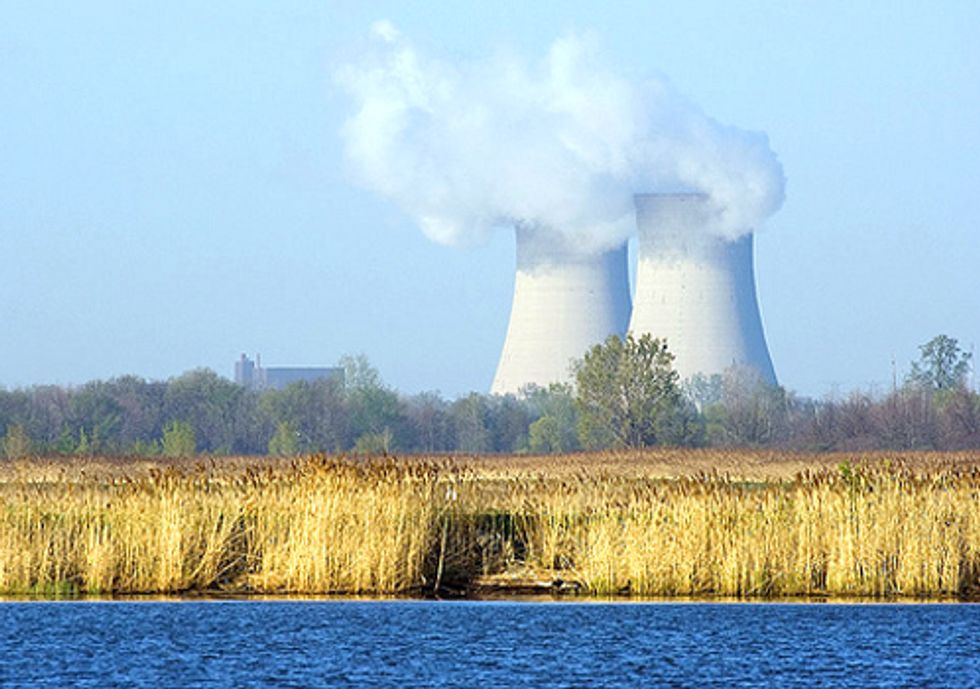 In 1942, Enrico Fermi led a team of scientists at the University of Chicago in creating the world’s first man made nuclear reactor, Chicago Pile 1, and first self-sustaining nuclear chain reaction—nuclear fission. This experiment took place on a squash court underneath the bleachers of the original Alonzo Stagg Field Stadium at the University of Chicago. Heralded as one of the world’s foremost scientific achievements, this scientific breakthrough lead to the Manhattan project and the unleashing of a nuclear age of weaponry married to the production of nuclear energy that has defined man’s most threatening and destructive scientific discovery to date. From Hiroshima to Nagasaki and the numerous nuclear detonations around the world, and on to Three Mile Island,  Chernobyl and Fukushima, Fermi’s breakthrough has lead to a wanton assault on humanity and the planet through the use of nuclear weapons and the profit driven production of nuclear energy with its fatal releases of poisonous radioactivity into the land, air and water.

The promise of “Atom’s for Peace” has proven to be a false one as the reemerging anti-nuclear movement in the U.S. struggles to avert more death and killing in Enrico Fermi’s name outside of Monroe, Michigan—on the shores of Lake Erie. Here sits a legacy of narrowly averted nuclear catastrophes and others waiting to happen. The Enrico Fermi Nuclear Generating Station is home to Fermi 1, that suffered a partial fuel meltdown in 1966  inspiring a book by John Fuller and song by Gil Scot Heron called “We Almost lost Detroit” and was officially decommissioned in 1975. The Nuclear Regulatory Commission (NRC) reported at the time that there were no significant radioactive releases, but we have come to learn that this is what the NRC always says when it comes to protecting the nuclear industry’s profit margins. As has been  the consensus of the scientific community for decades and thoroughly documented by Harvey Wasserman in this March, 2011 Counterpunch article, there is no safe dose of radiation.

The Enrico Fermi Nuclear Generating Station is also home to Fermi 2, our Fukushima on the Great Lakes. As Kevin Kamps of Beyond Nuclear recently stated, “Fermi 2 in Monroe, Michigan is the largest Fukushima Daiichi identical twin reactor in the world, and without electricity the storage pool will begin boiling away within four hours and twelve minutes, according to Detroit Edison documents. The potentially catastrophic reactor and radioactive waste risks at Fermi 2 could harm the entire Great Lakes and beyond,” he added. This GE Mark 1 reactor was built with design flaws documented by whistleblowers back in the early 1970s and the construction of the Fermi 2 reactor itself leaves grave questions as to how its spent radioactive fuel rods are being and will be monitored and contained safely. In 1976 Gregory C. Minor, Richard B. Hubbard and Dale G. Bridenbaugh blew the whistle on safety problems with  nuclear reactors designed by General Electric. The three resigned from their jobs after becoming increasingly convinced that the nuclear reactor design they were reviewing—the Mark 1—was so flawed it could lead to a devastating accident.

The concerns that these whistle blowers brought up have been brought to catastrophic light over the past year with the ongoing crisis at the Fukushima reactors in Japan. "The problems we identified in 1975 were that, in doing the design of the containment, they did not take into account the dynamic loads that could be experienced with a loss of coolant," Bridenbaugh told ABC News in an interview. "The impact loads the containment would receive by this very rapid release of energy could tear the containment apart and create an uncontrolled release."

Long time antinuclear watchdog and observer of the Fermi 2 reactor Michael  Keegan points out several current areas of concern with this Fukushima clone. Foremost of his concerns is the situation with the spent fuel pool. “Because Fermi 2 has done several re-racks and by 2015 the spent fuel pool will contain twice the rods it was designed for (4,600 vs 2,300 design), at that time a loss of spent fuel pool circulation would lead to a boil off beginning in 4.2 hours. Detroit Edison contends that they have water that could be pumped at a faster rate than the boil off. How long that could last if the station was in a black out, with loss of emergency diesel generators? Spent fuel pool boil off can lead to the spontaneous combustion of the zirconium casing of fuel rods and a catastrophic release of radioactivity.”

Keegan’s thorough evaluation of NRC documents pertaining to the Fermi 2 reactor details numerous mishaps and safety issues that have occurred with the plants operation since it went on line in 1988. In the summer of 2010, a tornado damaged the facility and forced the plant to shut down. The building housing the plant’s safety equipment was damaged and there was a loss of power at the plant. The plant had to depend on its emergency diesel generators at this time.

With 500 tons of spent fuel in a spent fuel pool located five floors above the ground at Fermi 2, there is another inconceivable and highly concerning problem facing the safe operation of the facility. Welds in the original blueprints from 1970 that were supposed to be built in to bolster vertical beams connecting the walls to the floors were never built in. According to Keegan, “So in 2010 discovery of missing welds that appeared on 1970 blue prints prevented the procedure of lifting the 125 tons of spent fuel bundles from the 5th floor down to ground with the crane. The floors and ceilings could not bare the load of the crane because welds were missing on the vertical beams. The crane is rated at 125 tons.”

Fermi 2’s most notable mishap occurred on Christmas Day of 1993. The results of this accident was the dumping of hundreds of thousands of gallons of radioactive water directly into Lake Erie.

The catastrophic failure of the main turbine at Fermi 2, Christmas Day 1993

The main turbine automatically tripped due to an erroneous mechanical overspeed signal caused by high vibrations. The reactor, which was operating at 93 percent power, received an automatic scram signal triggered by the turbine trip. The high vibration was caused by catastrophic failure of the turbine blades. Ejected blade parts ripped through the turbine casing and severed condenser tubes and other piping. The rupture of piping supplying hydrogen gas to the generator for cooling caused a large fire. The plant’s fire brigade took 37 minutes to muster, dress and enter the turbine building to fight the fire. Their efforts were hindered by numerous communication problems, including malfunctions of personnel motion detectors (e.g., “man down” alarms).

About 500,000 gallons of water from broken general service water piping and turbine building closed cooling water piping flooded the radwaste building basement to a depth of approximately six feet. Workers were slow to isolate the systems with broken piping to terminate the flooding, due to the total lack of procedures for a turbine building internal flood. The severed condenser tubes permitted water from Lake Erie to flow into the condenser hotwell, from where it was pumped to the condensate storage tank. The standby feedwater system pumped water from the condensate storage tank to the reactor vessel. The lake water caused conductivity and chloride levels of the reactor vessel water to significantly exceed specifications. (Fermi 2 Outage report Dec. 25, 1993 to Jan. 18, 1995 (1.1 years)).

Now Detroit Edison, the full owner of the Enrico Fermi Nuclear Generating Station, is proposing the construction of Fermi 3. With utterly false projections of energy usage in the state of Michigan that do not reflect the reality that electricity usage is actually shrinking due to conservation and deindustrialization. Detroit Energy claims that nuclear power is the cheapest means to meet its customers demands. The projected cost to construct the Fermi 3 Economic Simplified Boiling Water Reactor is $10 billion. Citizens groups are challenging the construction of Fermi 3 on a myriad of grounds ranging from the impact it will have on endangered species in the area to its contributing to the growing problem of toxic algae blooms on Lake Erie. The criminals at the Nuclear Regulatory Commission perceive that the construction and operation of a new nuclear reactor on the Enrico Fermi site in Newport, Michigan will have no significant environmental impact.

Detroit Edison and its Enrico Fermi Nuclear complex are now in the cross hairs of a growing grassroots mobilization against this continued nuclear psychosis emanating from the energy corporations and their corporate sponsored political mouthpieces from Obama on down through the bureaucracies of the criminal Nuclear Regulatory Commission and Environmental Protection Agency. Teaming up with national nuclear watchdog Beyond Nuclear, a grassroots coalition of citizens groups and Occupiers are joining forces in the Freeze Our Fukushima’s Campaign calling for the immediate closure of the 23 GE Mark 1 reactors, the largest of which is the Fermi 2 reactor. Coming actions include a protest of the GE shareholder’s meeting on the April 25 and the Detroit Edison shareholder’s meeting on the May 3, both taking place in Detroit. Pat Birnie of the GE Shareholders alliance an activist group of shareholders within GE have worked with Kevin Kamps at Beyond Nuclear to prepare the following documents and resolution that will be presented at the shareholder’s meeting in Detroit. As documented in this December, 2011 article called Occupy the NRC, both Detroit Edison and the rest of the nuclear power industry will not build another nuclear reactor in the U.S. with out a major fight.

Michael Leonardi is a writer and activist with Occupy Toledo. He currently lives with his family, 25 miles from Fermi 2 and 25 miles from Davis Besse.