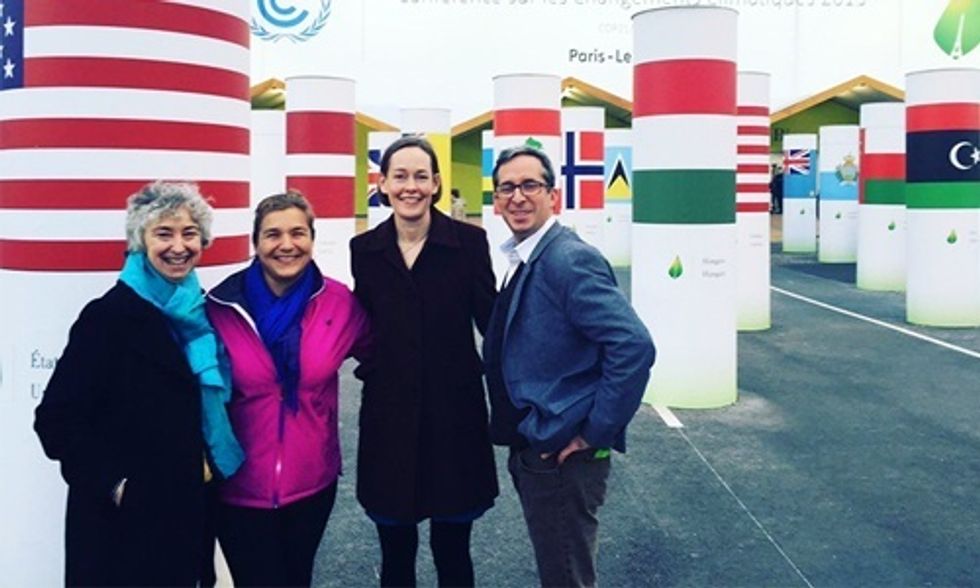 This week I’m in Paris for events around the international climate summit. It’s an honor to be here at all, but it’s even better to be here representing the powerhouse grassroots movement that’s moving America beyond coal.

Here in Paris, there’s a lot of buzz about coal, which is the number one source of the carbon pollution that’s throwing our planet into chaos, both in the U.S. and internationally. As the New Yorker pointed out this week, everyone knows the coal industry is on the ropes, but we’re still digging up and burning a lot of the stuff. The New York Times reported on a study finding the coal industry is in a permanent decline. Another report released in Paris this week found if all planned coal plants are built around the world, it will truly be game over for the climate. But the good news is that, thanks to clean air safeguards, the transition to a clean energy economy and grassroots activism all around the world, that coal pipeline is going bust.

Mary Ann Hitt arrives at the COP21 site at Le Bourget in Paris.

The bottom line is no matter what path you take to a safe climate, all roads lead to much bigger reductions in coal use as an essential part of the solution. Can we do enough in time to leave a safe world for our kids?

I’m here to answer that question with a resounding yes. Based on a decade of working with one of the most effective and tenacious campaigns in the history of the environmental movement, I know that we can—and will—prevail in the push to clean energy, even in unlikely places. For proof of that, you can look at the 184 new U.S. coal plants stopped by this movement or the 206 plants that have announced retirement since 2010.

But for a more recent example, look no further that Oklahoma, home to Climate-Denier-in-Chief James Inhofe, where we just won an epic round in an epic campaign.

Earlier this year, Michael Grunwald at POLITICO wrote about our work in Oklahoma as part of his feature story on the Beyond Coal Campaign. He profiled a year-long proceeding and trial before the state utility commission, where Oklahoma Gas & Electric (OG&E) was seeking to saddle it’s customers with a $1 billion rate increase that included $500 million to retrofit and prop up an aging coal plant.

Well this week, the utility commissioners voted 2-1 to deny the request by OG&E for approval and cost recovery for their so-called "environmental compliance plan." The utility said it was “stunned” by the rejection.

With this vote, OG&E has no approval to move forward with its plan or to raise the rates of Oklahoma families and businesses to pay for propping up the 35-year-old Sooner coal plant. That means we saved ordinary Oklahoma families $500M in rate increases going to an aging coal plant that spends another half billion per year to import coal from Wyoming. It also means we persuaded an elected board of utility commissioners in Oklahoma to reject life extension plans for aging coal plants on the grounds of economic risk. Oklahoma and its neighboring states of Texas, Kansas and Colorado are home to world-class wind energy resources that provide jobs to tens of thousands families and generate zero carbon electricity for millions of homes.

This is a game changing victory and it should send a signal of hope all the way to Paris. It's because of this momentum and our nation's commitment to cut carbon emissions through the Clean Power Plan, that the U.S. is positioned as a leader in the Paris negotiations.

As world leaders debate and discuss the path forward to a safe climate, this grassroots victory is one of many that should give them confidence—the people are leading, the wind is at our back, the economics are on the side of clean energy and even in the most challenging of places, we can win. If we can be bold, so can they. As UN climate envoy Mike Bloomberg and Sierra Club executive director Michael Brune put it in a recent op-ed for CNN, “the decline in coal use ... stems in large measure from citizens demanding cleaner air and action on climate change.”

They’re standing up to protect our climate and also to defend the health of their families. A new study released this week found that coal pollution is one of the most dangerous threats to our hearts. As the Washington Post reported:

"Exposure to emissions from coal-fired power plants over a long period of time is significantly more harmful to the heart than other forms of carbon pollution, a new study says.

"The risk of death from heart disease, including heart attacks, was five times higher for people who breathed pollution from coal emissions over 20 years than for those who were exposed to other types of air pollution, according to the study’s findings. The burning of coal releases fine particles with a potent mix of toxins, including arsenic and selenium."

In fighting for the health of their kids and the future of our planet, these regular Americans are taking on one of the most powerful industries in the history of the planet and winning. We just did it again and we’re just getting started. I’m proud to be carrying that message to Paris and I’m so grateful to every advocate and supporter out there who made it possible.