Fighting for Climate Justice: 29 of the Arctic 30 Released From Russian Jail 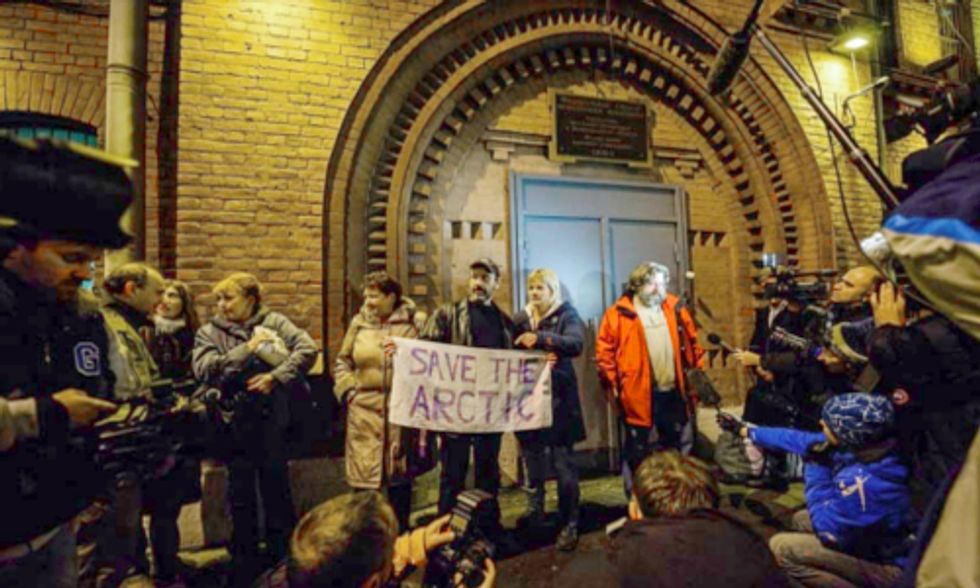 Today, Phil Ball from Oxford, England, became the second to last detainee of the Arctic 30 to be released from detention in St. Petersburg, according to Greenpeace. Colin Russell is the lone activist remaining in jail, where his lawyers are lodging appeals against his continued detention. They expect a hearing this week.

All but one member of the Arctic 30 team has been released from prison, where they were detained for more than two months for a peaceful action against Arctic oil drilling. Photo credit: Vladimir Baryshev /Greenpeace

The Arctic 30—made up of 28 Greenpeace International campaigners and two freelance journalists—were arrested nearly ten weeks ago following a peaceful protest against Arctic oil drilling in the Pechora Sea.

On Friday, in a case brought by the Netherlands against Russia, the International Tribunal for the Law of the Sea ordered Russia to release the Arctic 30 and their ship, the Arctic Sunrise, upon the posting of a 3.6 million euro bond, said Greenpeace. Russia is now under an obligation to comply with the order. The Russian Constitution itself states that international law forms an integral part of the Russian legal system and Russian courts are under an obligation to implement the order.

“Now that the Tribunal has ordered their release, I would remind you that President Putin recently said in a letter to the American people: ‘The law is still the law, and we must follow it whether we like it or not,’" said Greenpeace International Executive Director, Kumi Naidoo. “Greenpeace would not disagree—the law is the law and this ruling goes a long way towards rectifying the great injustice against the Arctic 30 and we welcome it with open hearts."

Peter Willcox, the captain of the Arctic Sunrise was released on bail Friday and spoke to reporters on Saturday. He described the trying ordeal in The New York Times, “The way we were arrested was quite scary,” he said. “They made the crew kneel on deck and took over the ship as quickly as possible. They had machine guns out.”

“The first thing they did was search everybody’s cabins and steal everybody’s liquor, and then they proceeded to drink it,” Willcox told the Times of the capture, saying the Russians staggered on the deck and were “quite drunk.”

Willcox has been involved in Greenpeace for more than 30 years. He was the captain on the first Rainbow Warrior vessel that was bombed in New Zealand by the French secret service in 1985, but had never spent more than a night in jail for Greenpeace activism.

“I have just come from the UN climate talks in Warsaw where governments again have failed to take action against climate change," Naidoo said. "The Arctic 30 took action and it is time that governments acted with them. It is time for the Arctic 30 to come home to their loved ones. It is time for the Arctic to be protected. Thirty people stood up for seven billion people—we must stand with them.”

Willcox, Ball and the other activists face charges of hooliganism, punishable by up to seven years in prison in Russia. Below is a compilation video featuring emotional moments experienced by the released Arctic 30.