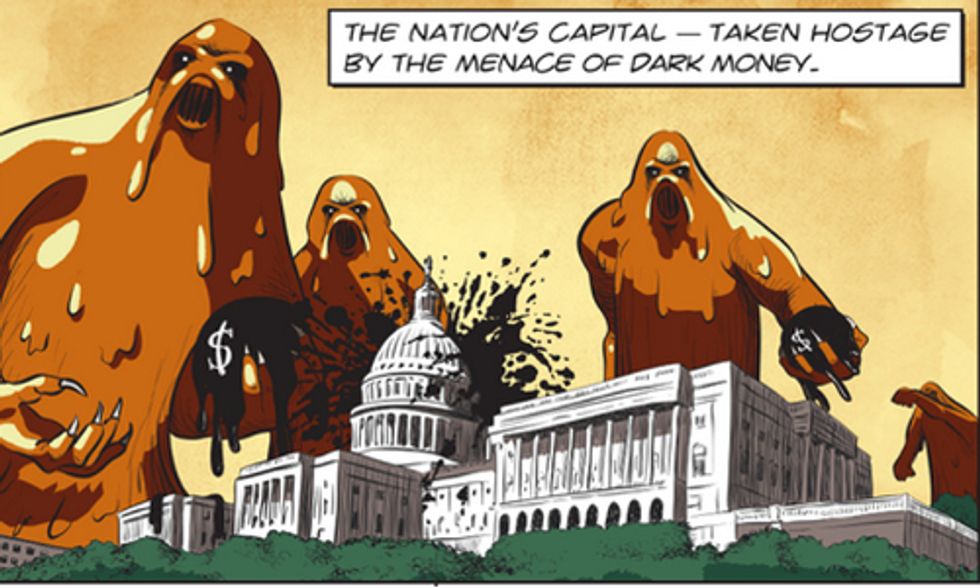 It's no secret that since the U.S. Supreme Court's 2010 Citizens United decision approved unrestricted campaign spending by corporations, elections have been drowning in a flood of what's referred as "dark money." Much of it has been passed through so-called social advocacy groups, such as the Koch Brothers-founded Americans for Prosperity, which don't have to reveal the source of the money they spend electing climate deniers to office. So we don't really know how much corporate money is being poured into such groups and where it's coming from. Even the shareholders who technically own these companies aren't privy to this information.

While groups like Move to Amend work to pass a constitutional amendment to end the money avalanche, there's a more direct and immediate route to holding corporations accountable. U.S. Securities and Exchange Commission (SEC) chair Mary Jo White has the power to curb corporate election spending. So a coalition of groups that includes Avaaz, Public Citizen, Common Cause, U.S. PIRG, Greenpeace, International Brotherhood of Teamsters and Communications Workers of America has pooled its money under the auspices of the Corporate Reform Coalition to launch a month-long campaign called "Where Is Mary Jo White?" urging her to do so.

"Publicly traded corporations, including many in the fossil fuel industry, are getting away with hiding their political spending from shareholders and the public, polluting not only our climate, but our democracy," said Greenpeace democracy campaigner Rachel Rye Butler. "The public deserves to know how corporations are spending investor cash to influence elections. More than a million people have asked the Securities and Exchange Commission to take action, so the question is, 'Where is Mary Jo White?’”

To spur White to take action, the comic strip-style ads will be plastered around Washington D.C.'s Union Station, a major transportation hub near SEC's offices. They depict White as a superhero who can save terrified investors and citizens from the "dark money monster." The ads will be promoted through social media with the hashtag #WhereIsMJW and an animated video that shows panicked citizens calling out for White to take action as towering monsters splatter the Capitol and the White House with oil-soaked bags of money.

The campaign is timed to precede the SEC’s spring announcement of its rulemaking agenda. Under former Chair Mary Schapiro, the agency had included a political disclosure rule on its 2013 agenda, but White removed it last year. A petition requesting the rulemaking was filed in 2011 by a bipartisan committee of law professors, and more than a million comments have been submitted to the SEC from investors supporting the rule, including large institutional investors such as pension funds and five state treasurers.

“Corporate political spending requires particular investor protections because it exposes investors to significant new risks,” points out Lisa Gilbert, director of Public Citizen’s Congress Watch division. “Corporate political spending choices may diverge from a company’s stated values or policies, or may embroil the company in hot-button issues. Investors have a right to know what candidates or issues their investments are going to support or oppose.”

That there is rising investor concern about corporate political spending, especially hidden spending, is indicated by the fact that, in the last five years, shareholders have filed more than 500 resolutions on such corporate spending. Last year such resolutions were the highest-scoring proxy proposals; four garnered majority support in spite of corporate management opposition. Already this year, investors have filed more than 110 such proposals, more than a quarter of all shareholder proposals filed in 2015. And most will receive no action and fail to move the corporations in the direction of greater transparency.

The "Where Is Mary Jo White?" campaign hopes that the SEC will take action on behalf of shareholders who are being stonewalled by the companies whose stock they own.

“From Big Oil to Big Pharma, this undisclosed dark money is rotting our corporate democracy from the inside out, and thousands of citizens are saying no more dirty secrets,” said Joseph Huff-Hannon, senior campaigner with Avaaz. “This cheeky ad campaign is calling on SEC Chair Mary Jo White to defend us and our country from these creatures. We know she can. The only question is, will she?”