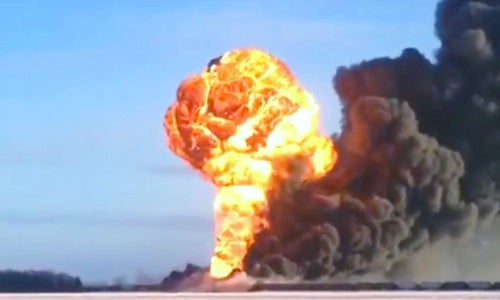 Light Bakken oil is surging in places like North Dakota, packing trains and leading to explosions like the one Monday that displaced residents near the 2,300-resident town of Casselton.

Firefighters decided it was best to let the fire burn out, which was estimated to take at least 12 hours. Fifty-six of the cars remained in danger and the fire destroyed both engines on the oil train.

Prior to the incident, the U.S. Department of Transportation had already began an operation—“Bakken Blitz”—to inspect North Dakota oil shipments on the spot, but those efforts might need to be doubled or tripled to prevent future hazards. Trains took about 700,000 barrels of North Dakota oil to market each day in October—a 67-percent increase from the previous year, according to the state Pipeline Authority.

In early November, two dozen cars on a 90-car oil train derailed in Alabama, resulting in a large blaze that took several days to extinguish. A train with a Bakken load in Quebec, Canada’s Lac-Megantic town exploded in July, killing 47 people.

Additionally, organizations like Dakota Resource Council believe there are plenty of oil spills in the state that are never reported.

A 100-car oil train usually holds about 28,000 gallons, according to Fuel Fix. Warren Buffett’s BNSF Railway, which owns the trains involved in the North Dakota wreck, carries 600,000 barrels of crude oil per day across its entire network.

The Association of American Railroads has proposed adding protective steel jackets, thermal protection and pressure relief valves to older tank cars in order to meet new standards, but those improvements could have little impact as long as crude oil is transported. The estimated costs could creep into the billions and have already led to opposition from oil shippers, according to Reuters.

North Dakota’s top oil regulator said earlier this month that as much as 90 percent of the state’s oil would be carried by train in 2014, up from the current 60 percent. North Dakota trails only Texas in terms of oil shipments, according to CBS. Crude oil carloads in the U.S. grew from 10,840 in 2009 to a projected 400,000 in 2013. Railroads insist that 99.997 percent of hazardous materials shipments reach their destinations safely.