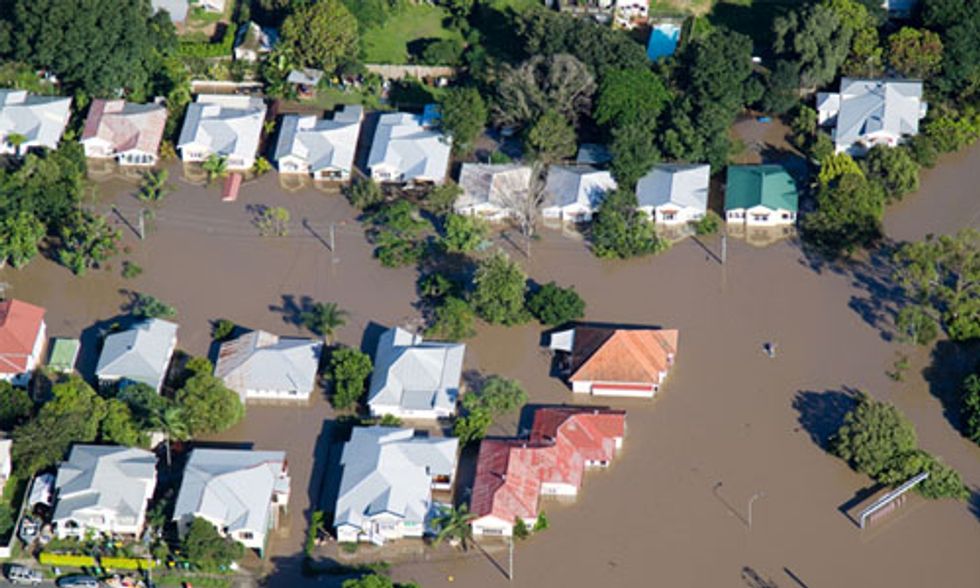 Now that streams here in Oregon are rising with runoff from autumn storms, I'm reminded that when it rains it pours. Oregon's last major flood was in 1997. We're due. And in every region of the country, high water inevitably reoccurs over and over again.

More important, the floods are going to get worse. Ironically, both droughts and floods will become more extreme according to the models of climate change.

Even after a century of aggressive efforts to "control" floods with dams and levees, floods are costing taxpayers dearly.
Photo credit: Shutterstock

First, let's look at the bright side. Biologists tell us that floods are fundamentally good for rivers, even though the initial results might look a little rough. The scouring actions of floods create deep pools that every angler knows are essential as cold-water refuges for fish. Floods rearrange cobbles into riffles needed for aeration of water, create habitat for invertebrates that become fish-feed, and accumulate gravel essential for spawning fish—salmon, for example. Floods recharge groundwater that we depend upon later in the year, and they nourish riverfront forests—best habitat of all for wildlife. The rub is not that rivers flood, but that we've built houses and businesses directly in the way.

Even after a century of aggressive efforts to "control" floods with dams and levees costing taxpayers dearly, America suffers increasing flood damages averaging $8 billion per year according to the National Weather Service. One reason is that we keep adding more development on the floodplains.

To address the long-standing problem, and to replace disaster relief, Congress in 1968 enacted a National Flood Insurance Program with this logic: the Federal Emergency Management Agency (FEMA) would subsidize otherwise unaffordable flood insurance for people who are already located on flood-prone land, but only if their local governments acted to eliminate flood damage incurred by future development. In other words, to accommodate mistakes of the past but not of the future. Zoning is the key: areas expected to flood at least once in 100 years have been designated as floodplain (courts have consistently upheld open-space zoning for floodplains since the 1920s).

Under the Program, the amount of damage should have shrunk by attrition. However, owing to influence by the building industries, the FEMA-approved flood zones have not halted floodplain development. Rather, they've allowed for "flood proofing" by adding fill to artificially raise the level of the land or by elevating structures on pilings.

FEMA's approach hasn't worked. Earthen fill that's trucked-in to raise the level of floodplains pushes the water elsewhere—onto neighbors' properties—like a rock dropped into a bucket of water that's already full.  Structural reinforcements have proven no match for riverbank erosion or channel migration, which has occurred ever since rivers began to run. Furthermore, errors of mapping and the increasing intensity of storms have delivered floods far exceeding those expected on the agency's maps, which continue to allow vulnerable investments.

There's plenty of room for construction elsewhere; only 5 percent of America's landscape is flood-prone. But because of development built in harm's way, the Flood Insurance Program runs at a whopping $24 billion deficit, somehow tolerated in an age when conservative taxpayers rail against programs as essential as education and health care. Why are floodplain developers given a pass that pushes such a sensible program toward bankruptcy?

This topic is timely because the National Oceanic and Atmospheric Administration's Fisheries department is considering a new rule directed at the FEMA program. Floodplains in Oregon and California, for example, would be mapped more accurately. Development in acutely hazardous areas would be stopped. Though universally needed, these sensible steps would apply only on the agency's home turf: streams where endangered or threatened species of fish and wildlife still exist, including coastal waterways in the Northwest that are vital for coho salmon.

This modest proposal deserves support. Beyond that, the Flood Insurance Program cries for overhaul.

The alternative is greater flood damage, skyrocketing private and public costs, and unnecessary human suffering. And all the while, we taxpayers are underwriting the destruction of our rivers' precious natural qualities.

It's time to quit making the same mistakes over and over again.