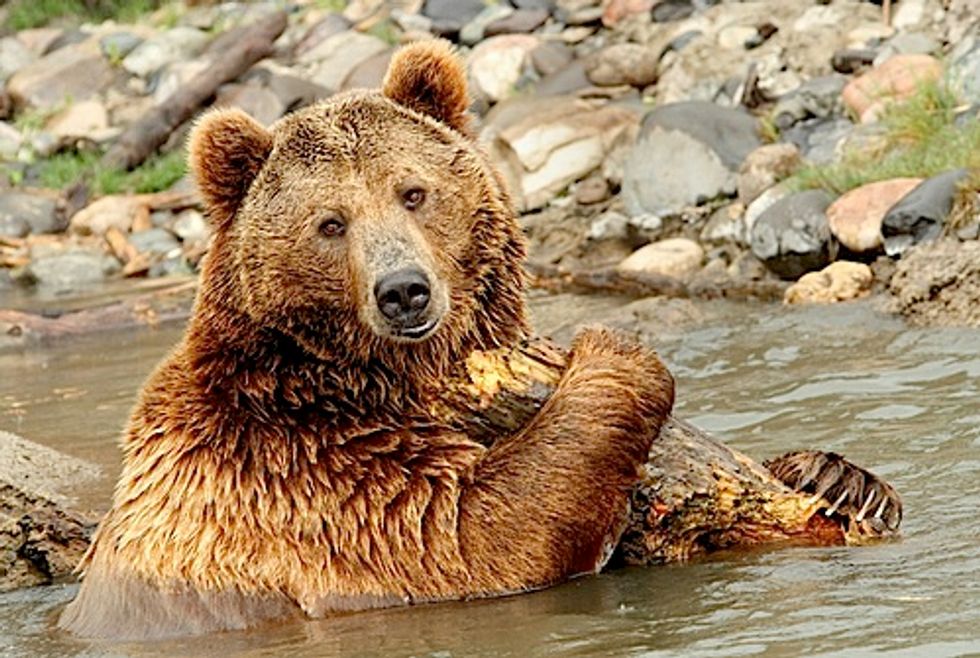 Brushing aside mounting evidence that Yellowstone’s grizzly bears face increased threats from genetic isolation, loss of key foods and increased human conflicts and mortalities, federal and state officials are recommending removal of Endangered Species Act protections for the bears as early as next year.

States argue they are ready to take over management of the bears, which, like wolves, could be aggressively hunted under state plans.
Photo courtesy of Shutterstock

At the Yellowstone Ecosystem Subcommittee meetings in Bozeman last week, the U.S. Fish and Wildlife Service’s (USFWS) grizzly bear recovery coordinator Chris Servheen fell short of setting a timeline for removing federal protections for Yellowstone’s threatened grizzly bears. But citing unpublished studies and unreleased data, Servheen and federal scientists said the grizzly population is robust and healthy. The states argued they are ready to take over management of the bears, which, like wolves, would be aggressively hunted under state plans. The agencies’ recommendation to delist grizzly bears was conditioned upon release of a final scientific report, due at the end of November.

“With the loss of important foods, the world of the Yellowstone grizzly is unraveling," Willcox continued. "Now is not the time to turn over the keys to management to states that are known to be hostile to large carnivores and plan to renew a grizzly bear hunt.”

Removal of protections for bears is being justified by purported increases in the bear population that are based on models showing the population number is now 741 bears, up from previous estimates, announced earlier this year, of roughly 600 bears. But the USFWS and federal scientists have repeatedly refused to release the data that supposedly shows there are more bears.

“There’s no way to know if these are paper bears or real bears, because the government has refused to release the taxpayer-funded data and analyses upon which its findings were based,” said Willcox.

A study published earlier this year by leading scientists questions the accuracy of the USFWS’s optimistic bear trends. The study offers evidence that the agency’s estimates of the population size and trend are likely inflated due to data-collection biases and inaccuracies, including the incorrect assumption that female grizzlies reproduce at maximum rate until the age of 25 to 30.

Another new study, which was produced in coordination with the USFWS and the interagency grizzly bear study team, suggests the grizzly population may even be declining by an average of four percent a year since 2008. The decline parallels the loss of whitebark pine, a key food, and a concurrent spike in bear mortalities.

Ever since a federal court struck down the USFWS’s 2007 attempt to remove grizzly bears’ federal protection, the agency has made no secret of its ongoing plans to delist the bears. In its ruling against the service two years ago, the court cited the agency’s inadequate recognition that dramatic reductions in the white bark pines central to the bears’ diets would likely drive the grizzlies to forage more in lowland areas, increasing confrontations with people and bear deaths.

“The government is cherry-picking the data to get the result it needs to justify delisting," said Willcox. "In reality, top grizzly researchers say the bear population has likely been in free-fall for five years now.”

“The hard-fought gains to restore grizzly bears over the past 38 years will be quickly reversed if current declining trends continue—and delisting would push Yellowstone’s magnificent grizzlies back to the brink of extinction,” Wilcox continued.

The USFWS argues that the collapse of whitebark pine and cutthroat trout, formerly key bear foods, does not matter as the grizzly bear is known to eat more than 200 other foods as well, such as earthworms, mushrooms and biscuitroot. That assertion assumes these foods can adequately substitute for high-calorie foods like pine seeds and trout—foods that the government has long maintained were key drivers of the health of the Yellowstone population. The agency also argues that the genetic isolation of bears does not matter because bears will be trucked in to improve the health of the population.

“Claiming other foods can just substitute for pine nuts and trout is like saying a bowl of lettuce packs the same punch as a four-course salmon dinner,” concluded Willcox. “There’s still a chance to reconnect Yellowstone to other grizzly bear populations and bring back grizzly bears in the lower 48, but not if Yellowstone’s population is prematurely delisted and subsequently crashes.”